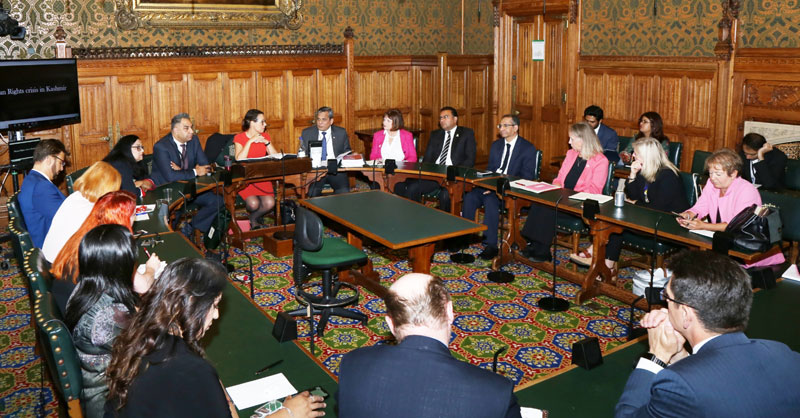 Pakistan’s High Commissioner (HC) in the UK Mohammad Nafees Zakaria has said that since 5th August 2019 and for the past seven decades, Indian governments have been perpetrating grave human rights violations in the occupied territory unabatedly with impunity.

Indian governments’ atrocities, such as mass killings, fake encounters, abductions, forced disappearances, use of prohibited weapons such as pellet guns and cluster munitions against the defenceless Kashmiris have caused incalculable sufferings to the Kashmiri nation and these atrocities come under the ambit of crimes against humanity under all human rights and humanitarian conventions, statutes and United Nations resolutions.

HC Zakaria was addressing a meeting of large number of UK Parliamentarians facilitated by the All-Party Parliamentary Group on Kashmir (APPKG), in the House of Commons, London. Zakaria underlined that complete lockdown in IHK for 31 days with no communication with the outside world, and the reports of killings, abductions, illegal detentions, rapes and use of pellet guns against the defenceless Kashmiris was a matter of deep concern. Since there is no access to media in IHK, the actual scale of atrocities could be much more given the Indian governments’ track record of torture, killings in fake encounters, forced disappearances, and other in human treatment, he added.

The HC noted that all these human rights violations were taking place in the 21st century and amidst protectors of human rights, by a so-called world’s largest democracy. He urged an immediate and unconditional end to the bloodshed of Kashmiris in the IHK; delivery of justice to the victims; and, accountability of the perpetrators as demanded by international human rights bodies and NGOs of international repute and members of the civil society, such as OHCHR, IPHRC, Amnesty International, Human Rights Watch, US Human Rights Report on India and International People’s Tribunal. The High Commissioner reiterated that Pakistan would continue to extend its moral, political and diplomatic support to the oppressed people of the IHK in realization of their inalienable right to self-determination and do everything in its capacity to ensure delivery of justice to the Kashmiris in IHK. He lauded all the British parliamentarians for becoming voice for the oppressed people of IHK. British Parliamentarians noted with concern the tragic situation of human rights as well as Indian government’s blockade of the Indian Occupied Kashmir (IHK), which has led to severe humanitarian, political and security crisis in the Occupied Territory. Acknowledging that the Kashmir Issue was an internationally recognised dispute awaiting implementation of UNSC resolutions, they agreed to continue to work towards ensuring alleviation of human sufferings faced by the Kashmiri people in the IHK.

Both sides agreed to build upon the conversation and charting a way forward to bring an end to the ongoing human tragedy.