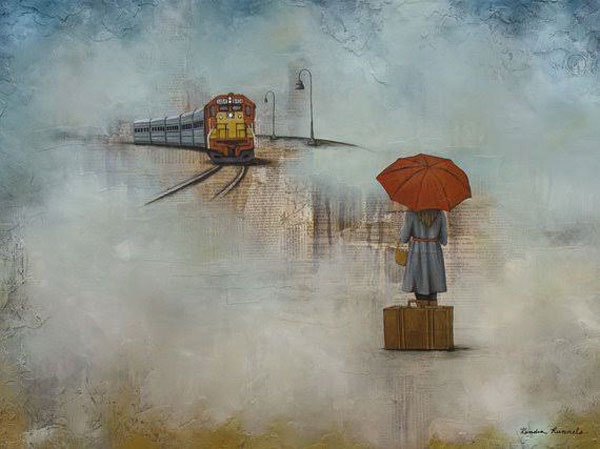 The sky above was full of darkness with wandering coppery clouds. It was a grey, unpleasant and sombre evening with the sky threatening rain. There was a long queue in front of the booking window.

The passengers were waiting avidly for the train. Coolies were carrying heavy loads of luggage on their heads. When the train arrived there was a great scramble on the compartment doors.

The young lady was sitting in a compartment, wearing a black coloured gown. Her head was covered with a silk royal blue scarf and the face with a niqab (veil). Her eyes were as deep as the sea.

The guard flew the whistle and waved the flag then the train departed. There was waving of hands. The train left the station and the platform looked a deserted place. Meanwhile, an older woman entered in the same compartment carrying a rusty-brown colour suitcase.

She was covered with a black colour shawl.

“It’s looking that it’s going to rain outside,” after settling said the older woman.

“Are you travelling alone?”

“I don’t get how people let their daughters travel alone, I’m with my son, he is sitting in the next compartment with male passengers,” said the older woman bluntly.

She continued, “I have heard about many rape cases. I never allow my daughters to go outside alone.”

The weather outside was bleak and brisk; the greasy off-white smoke was coming from train chimney making the atmosphere smoky and misty.

She continued, “You will not believe it! Once my sister told me a very mysterious and awful story. An 18-year-old girl in their neighbour was gang-raped and was found in the garbage.

Garbage – where we throw waste,” she stressed on the last sentence.

The lady gazed at the older woman with astonishment and disbelief. The compartment was getting cold. The glass window was now wrapped with fog and the view was blurry.

She continued, “Maybe the girl’s name was Zaira or might be Zainab.”

“Her name was Zara Ahmed,” told the lady interrupting the older woman.

“Oh, you’re right her name was Zara Ahmed. How beautiful her name was and how unfortunate she was,” said the older women in regret.

She added, “How you know the girl’s name?”

The lady replied, “That girl was my close friend.”

She added, “You only know the fragment of that story.”

Then that lady started narrating the story.

“It was a sunny afternoon. She was returning from her college. She was happy because she got an A+ grade in her exams and was very excited to tell her parents. On the way, someone put on a handkerchief on her mouth after smelling it, she fell down and suddenly someone carries her in a van. This whole happen in a blink of an eye that she doesn’t even try to defend her.”

The older woman was listening eagerly. There was a dark and beautifully serene view of the night outside. The rich Oakley aroma of cigarette smoke was pervading in the compartment.

The lady continued, “When the girl opened her eyes she found herself in a hospital. She was unaware of the incident that has changed the dimensions of her life. When she knew, she was regretting, tears were rolling down her cheeks. Everything was finished and her life was like a desert where there was no hope of blooming flowers. Luckily, her parents give her love, care, and support. After some time, she returns to normal life. Almost four years have passed to this incident, now, she is a social worker and working with a Women Rights Organisation.”

“She was really a strong girl,” said the older woman sadly.

“No doubt, she was a very sturdy and a courageous girl,” said the lady.

How fast the time passes both didn’t realize. It was midnight and still, it was extremely dark and cold outside.

The lady said, “My city is about to come.”

“Oh! my friend also lives in the same city which is about coming,” said the older woman.

“Your friend that told you about that awful story,” the lady confirmed.

“Yes that one,” said the older woman.

The lady gets ready for leaving the compartment.

“I really enjoyed your company,” said the lady.

“I also enjoyed your company, but how strange it is to spend almost half my journey with you and see you had not told me your name,” said the older woman.

“My name is Zara Ahmed,” told the lady after a long pause and move towards the compartment door.

Suddenly, something hits the older woman’s mind. There was complete silence like the world stopped for a second. Meanwhile, the train stamped the station and the lady walked out.

The writer is a blogger and a student of Bachelors at the Institute of Business Administration. She can be reached at [email protected]