The ultranationalist ideology of Hindu tv a or Hindu-ness was formulated by Savarkar in 1923, it is the predominant form of Hindu nationalism in India. It is championed by a full network of organizations including the Hindu nationalist volunteer organisations Rashtriya Swayamsevak Sangh (RSS), Vishva Hindu Parishad (VHP) and Hindu Sena – all belonging to the Sangh Parivar that since then have conquered all regions of India, their total domination includes political, economic, cultural and youth organizations, think tanks and publishing houses. That explains the all-embracing popularity of the ideology even among un-political or left-leaning people. It partly explains the massive electoral victory of BJP and the weak critique and mainly positive resonance of the scrapping of Article 370.

Described as “almost fascist in the classical sense”, the Hindu tva movement adheres to a concept of homogenised majority and cultural hegemony. How exactly is Hindu tv a connected to fascism? Fascism in Europe is a form of far right-wing, authoritarian ultra-nationalism characterized by dictatorial power, forcible suppression of opposition, and strong regimentation of society and of the economy which came to prominence in early 20th-century Europe. The fascist view of a nation is of a single organic entity that binds people together by their ancestry and is a natural unifying force of people which very much reminds Hindu tv a.

The fascist conception of the state is all-embracing; outside of it no human or spiritual values can exist, much less have value. Thus understood, Fascism is totalitarian, and the fascist state-a synthesis and a unit inclusive of all values-interprets, develops, and potentiates the whole life of a people. Fascist states pursued policies of social indoctrination through propaganda in education and the media and regulation of the production of educational and media materials. Sounds familiar again?

Another connecting element between fascism and Hindu tv a is the Swastika, a geometrical figure and an ancient religious icon in the cultures of Eurasia. The name Swastika comes from Sanskrit word Swastik meaning ‘conducive to wellbeing’ or ‘auspicious’. The use of Swastik is not limited to Hinduism; it is used as a symbol of divinity and spirituality in different Indian religions including Buddhism and Jainism. Though it is used by Hindu nationalism for making a connection to the Aryan origin of Vedas it is not used very broadly because of the obvious problems it is creating to incorporate into its idea of Indianness of the non-Aryan population in Southern and Eastern India. In the Western world, it was a symbol of auspiciousness and good luck until the 1930s, when it became a feature of Nazi symbolism as an emblem of Aryan identity. As a result of World War II and the Holocaust, most people in the Western World associate it with Nazism and anti-semitism. This symbol for Hindutva being a fascist ideology is not a coincidence given the markedly similar ideologies of discrimination and opposition against these not part of it. 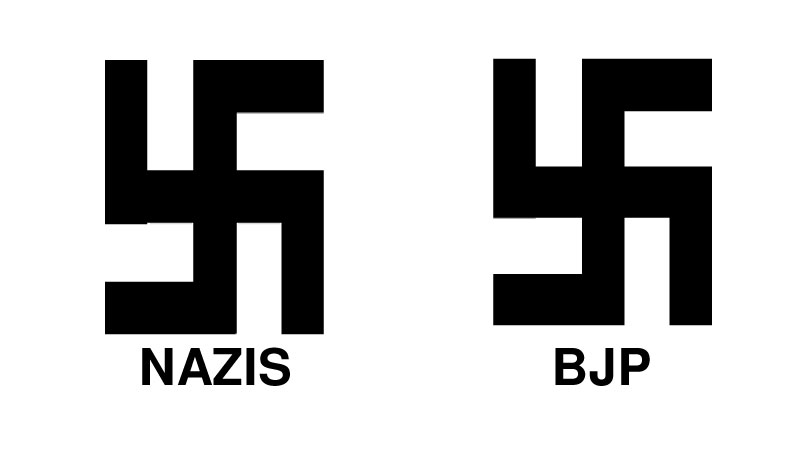 In addition, racism, especially anti-semitism, was a central ideological feature of the fascist regime. The Germanic peoples were considered by the Nazis to be the master race, the purest branch of the Aryan race symbolized by the Sawstika. Discrimination and persecution against Jews and Romani people began in earnest after the seizure of power. The first concentration camps were established in March 1933. In India it took some more time to reach this stage. The first concentration camps are currently erected in Assam to intern ‘foreign’ Bengali Muslims. It is amazing how the Bangladeshis ignoring and/or tolerating this?

Hitler wrote his opus magnum ‘Mein Kampf’, which laid out his plan for transforming German society into one based on race. Nazi ideology brought together elements of antisemitism, racial hygiene, and eugenics, and combined them with pan-Germanism and territorial expansionism with the goal of obtaining more Lebensraum for the Germanic people. Again we can see many parallels. Savarkar explained that only religions born in India are indigenous and fit ‘Indian-ness’. He declared Islam a foreign religion brought into India by foreigners and those Muslims who refuse to give up this foreign label were declined “foreigners” by Savarkar. However this very Nazi idea was even older: The Shuddhi (purification) movement founded in early 20th century by Arya Samaj, one of the leading members of which was prominent Congress member Lala Lajpat Rai. 1923, the ‘Bhartiya Hindu Shuddhi Mahasabha’ was founded and pushed the agenda of reconversion of Muslims and Christians forcefully and India-wide. Written in 1925 Mein Kampf outline German fascist ideology while Savarkar’s Hindutva outlines Indian fascist ideology. Interestingly both came into existence almost simultaneously; Hindu tv a precedes the German publication by two years. Indian fascism was not off-spring of the German one; it rather suggests an independent development of both similar ideologies.

Having a closer look at Hindu tv a one can detect related features of it to the European fascist model. the idea of a universal and essential Hindu identity that is based on ethnicity and common ancestry thus making each person born in India (understood as the subcontinent disregard less of modern political states in it)on Indian soil a Hindu. The image of India as a woman ‘Bharat Mata’ and Indian soil as her womb that gives birth to this Indianness and unity is important. Mother India is imagined, depicted and worshipped as an Indian goddess clad in saffron holding he Indian national flag and is sometimes accompanied by a lion. The image of Bharat Mata formed in the Indian independence movement of the late 19th century. A play by Bengali Kiran Chandra Bannerjee, called Bharat Mata, was first performed in 1873. That shows that the nationalist idea in India took roots first in Bengal creating, this Bengali nationalism and Indian nationalism at almost the same time. Bankim Chandra Chatterji in 1882 wrote a novel “Anandamath” and introduced the hymn “Vande M?taram”, which soon became the song of the emerging freedom movement and the Indian National Congress. Given its rich reference o Hindu imagery it bound to repel Muslims. It says:

“Who has said you are weak in thy lands when the sword flesh out in the seventy million hands And seventy million voices roar thy dreadful name from shore to shore? With many strengths who are mighty and stored, To you I call, Mother and Lord!

Every image made divine in our temples is but thine You are Durga, Lady and Queen, With her hands that strike and her swords of sheen, You are Lakshmi lotus-throned, And the Muse a hundred-toned, Pure and perfect without peer, Mother lend thine ear!

As the British Raj made the cartographic shape of India public through the publications of the Geological Survey of India, the Indian nationalist developed it into another icon of nationalism. Indian nationalism thus connected the territorial feature of European nationalism with the religious images of a Hindu goddess and the need to worship and sacrifice for her. It made a splendid nationalist imaginary that could easily be explained and transmitted to an uneducated population in the villages of the subcontinent. And even before Savarkar or Hindu Mahasabha it was Congress that embraced the hindu-nationalist image of Bharat Mata which defies all claims of religious neutrality or secularism past and present. But while Congress used the images more for propaganda among the people who would not have been able to understand the abstract idea of a nation and nationalism Savarkar and the founded in 1925 Rashtriya Swayam Sevak Sangh made this idea the central piece of their movement (Final of a series of three articles by defence and security analyst Ikram Sehgal and Dr Bettina Robotka, formerly of Department of South Asian Studies Humboldt University, Berlin).