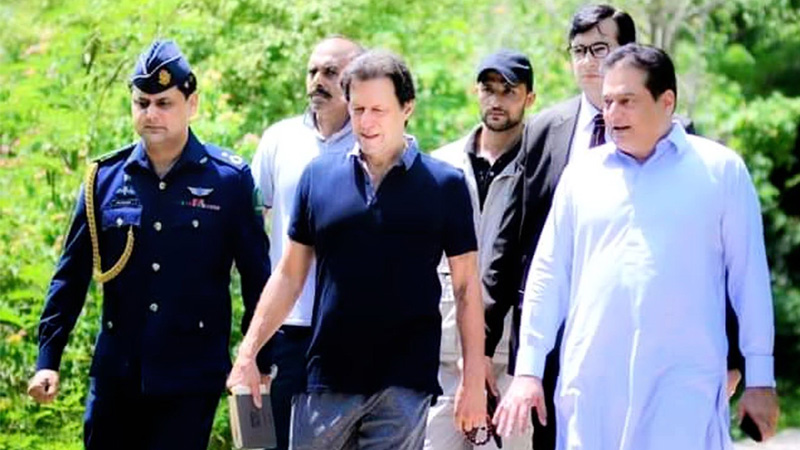 The meeting, which lasted for three hours, was attended by Adviser on Finance Dr Abdul Hafeez Shaikh, Minister for Planning and Development Khusru Bakhtiar, Adviser on Commerce Abdul Razak Dawood, and other members of the economic team, PM Office Media Wing said in a press release.

Later talking to media, Adviser on Finance Dr Abdul Hafeez Shaikh said the meeting had three to four main objectives, including assessment of economic progress, reviewing performance of the important ministries like planning, commerce, agriculture, revenue and industry, and preparing an all-focused roadmap. He said the government wants to accelerate progress on all the major development projects with focus on economic stability, so that their benefits can reach the masses.

The government has allocated about Rs 950 billion budget for the development programme and the completion of major projects will benefit the common man, besides helping in jobs creation, he said. The prime minister directed that all the major projects should be monitored on continuous basis so that their benefits could be passed on to the masses, he added.

Hafeez Shaikh said the government has also earmarked Rs 192 billion for the weaker segments of the society. “It wants that the cash transfers like Sehat Insaf cards and other relevant programmes should be accelerated so that the people realize that the government is taking all possible efforts for their economic well-being,” he added.

He said the government has also set aside Rs 262 billion for the provision of subsidies and its major objective is to protect the weaker segments from the burden of cost of electricity and other items, and help the business community as well in reducing their costs. All the steps are being taken with a public focused approach, and for facilitation and increasing confidence of the business community, he added.

The adviser said due to such policies, positive impacts are being felt as the stock market gained by 9 per cent in last week. After a long time, he said, exports have increased in the month of July. The export sector is doing far better than the last corresponding year, he claimed.

Dr Hafeez said a comprehensive roadmap for the economic development is being prepared in which the decisions for increasing performance of relevant ministries will be taken. To address issues like construction of dams or roads or to bring investment for the economic zones, important decisions will be taken under that roadmap, he said, adding that it has been decided that under the roadmap, the economic team will meet every week with the prime minister in the chair to discuss further required actions.

He reiterated that the government wants to extend subsidies to the business community in power and gas, besides easing loan facilities and lessening of revenues burden and all the issues will be resolved by holding meetings with them. He also announced that if oil prices are reduced internationally, the government is keen to pass on the benefit to the general public, and expressed the hope that such thing can happen in the next month.

Separately, Prime Minister Imran Khan chaired a meeting to review the progress on establishment of state-of-the-art University of Engineering and Emerging Technologies at the Prime Minister’s House.

The meeting discussed the matters regarding the establishment of national centres of research, innovation and entrepreneurship in artificial intelligence and allied technologies, and major national human resources development programme.

Minister for science and technology briefed the prime minister about various initiatives being taken by his ministry to promote scientific and technical education, besides encouraging research and development activities. The briefing also encompassed the ministry’s measures for establishing effective linkages between various government organizations and the industry in the field of research in science and technology.