* In order to celebrate this event, Hindus sing, dance, fast, worship and feast 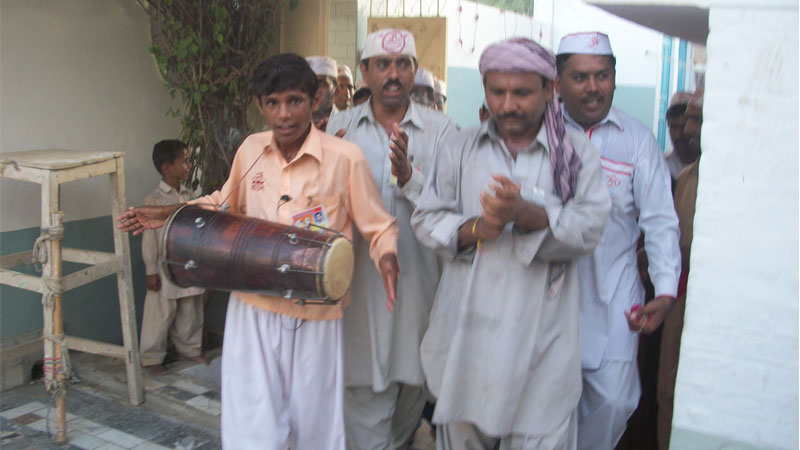 They sing, dance, fast, worship and feast. Food is prepared at wide range, many of them bring fruits for distribution. A big mela is also organised on this festival in Sadiqabad. Many devotees visit in the group of cycle teams few comes by walk rest of people come by their own conveyance. A great influx of Hindus from Sindh and Punjab is observed over there. Some Hindu communities celebrates Lord Krishna’s legends as a Makhan Chor (Butter thief)as lord Krishna was fond of butter and use to steal butter from the houses . Few people are of opinion that Lord Krishna was against the tax that is imposed by Raja Kans on the milkmen.

Lord Krishna was born in a prison of Mathura where his parents Devaki and Vasudeva were imprisoned by Raja Kans. It is believed that Lord Krishna is the 8th avatar of Lord Vishnu who came to end the evil of the Earth. Lord Krishna was born in the age of chaos, evils, worries and persecution. He had also a threat of life by his uncle raja Kans. That’s why he was sent across the jamna river where he got foster parents named Nanda and Yashoda.

On this festival many of Hindus wear new dresses and visit the Krishna & Vishnu temple. They also bring their offerings mostly the Hindus prepare dairy products on the festival as it had been the favourite of Lord Krishna. Many of Hindus bring coconut, fruits and milk products in the temple for distribution. Few of them arrange food for those who come from a far away. The festival of janam ashtmi in sadiqabad lasts for 2-3 days. Many religious singers present bhajans, bhakti or worships is continuous for every time.

As anyone enters in the lord Krishna’s temple he/she rings the bell and handover his offerings to the pandit (spiritual leader) who gives all the offerings to the sevak (volunteers) for the distribution. A big statue of krishana is here where people prayer in front of him. A small baby toddler Krishna’s statue is set in the swing and the women feel honor to swing the baby lord krishna.

A mela in open place associated with Krishna munder is also organised. Small shops with all types of items are here. All the household items like jewellery, crockery, food and statues are sold here. Many stall of bangles, mehndi, dresses were aslo present here. The langer khana (free food) is also here to serve the people with food who come from a far away, a place is also given for their night stay. As the night starts a big stage is prepared for the performances all the religious singers are invited here. This is the whole night bhakti (worship) programme.

In the villages of Thar and Cholistan Desert, the janam ashtmi is celebrated in a different way. They make a statue of Lord Krishna and dance around it to “please” him and the next morning, this statue is sent afloat in a stream or a canal. The birth anniversary of Lord Krishna is supposed as the victory over darkness. It’s believed that Lord Krishna played a key role in the war of Mahabharat and he supported the truth against the evils.

The writer is a PhD scholar. He can be reached at kashifjamil397@gmail.com