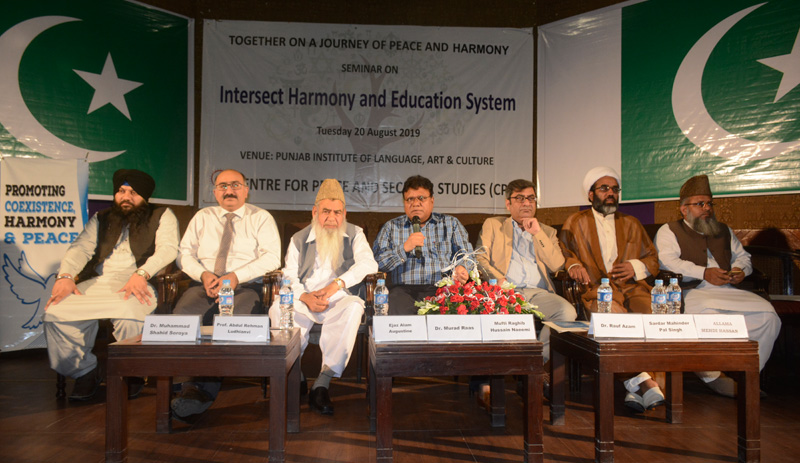 Senior government officials and educationists on Tuesday urged all religious institutions, including mosques, temples and churches, to share messages of understanding, acceptance, peace and peaceful coexistence.

Addressing a seminar – Intersect Harmony & Education System, organised by the Centre for Peace & Secular Studies (CPSS) – here at the Punjab Institute for Language, Art and Culture (PILAC), the speakers focused on the role of academia in promoting intersect and interfaith harmony.

Addressing the audience, Punjab Minister for Human Rights & Minority Affairs Ejaz Alam Augustine said that the government would introduce interfaith harmony as a subject in colleges and universities with prime focus on spreading awareness among the new generation on intersect and interfaith harmony.

“We are working on transforming curriculum with the help of a committee of people from different faiths,” he informed a questioner. “Our students will receive 40 per cent ethics and 60 per cent religious education under a new framework,” he told another questioner. “We are also working on introducing an incentive for students who will study other religions,” he announced.

In his short address, Parliamentary Secretary for Human Rights Mahinder Pal Singh said that all religions and faith preach intersect and interfaith harmony and promote peaceful coexistence. “We should avoid a search for negative points in each other’s’ religions and faiths,” he advised.

In his thought-provoking address, Islamic Ideology Council (IIC) member Mufti Raghib Hussain Naeemi said that the Islamic seminaries were playing a major role in transforming young generations to excel in various fields. “Our (seminary) students are becoming doctors, scientists, engineers, army soldiers and in different fields of technology,” he pointed out.

On the occasion, Wafaq-ul-Madaris Director Prof Abdul Rehman Ludhianvi said that everyone must know that visiting religious institutions of different religions and faiths have a positive impact because this act bridges the gaps and promotes love and peace.

Minhaj University Pro-Vice Chancellor Dr Muhammad Shahid Soroya said that his university encourages students to explore their talent and gives them platforms for arts including acting and theatre. “We give students confidence through different activities to bring them closer to each other,” he said, and suggested a change in the culture of classrooms.

At Minhaj, Dr Soroya said that the students from all sects enjoy the same freedom of expression and learning. Also, Allama Mehdi Hassan said the menace of hatred that was seen between different faiths and sects needs to be countered by religious schools and religious leaders. He asked religious schools and scholars to expel and ban preacher of hate.

University of Education Vice Chancellor Dr Rauf-e-Azam told the audience that there were limits in every religion and those limits were set by the respective religions. We should give all respect to these religious limits and there should be no attempt to cross the red lines,” he said. “We need to understand each other,” he said. Like social media, “we have to show religious tolerance and acceptance on ground,” he said.

During the seminar, student from Jamia Naeemia Muhammad Moinuddin who secured second position in recent Lahore Board papers also shared his success story. On the occasion, Dr Sughra Sadaf said that several leaders from different seminaries created history in fields like academia, history and politics.

During the question & answer session, the audience asked questions to all the panellists who urged immediate need to address the menace of extremism and intolerance. The speakers agreed on the need to create space and acceptance between different faiths to present symbolic and sustainable promotion of harmony.

It was agreed that hate speech has mislead many towards intolerance towards other sects and faiths, urging the need to mitigate through better and coordinated efforts between representatives of all sects and faiths. Discussing different laws, including the National Action Plan, the panellists highlighted the need to coordinate with the government and compel them to implement these laws to safeguard the lives of its citizens.