Trust me, I will be speaking the truth only: PM to US 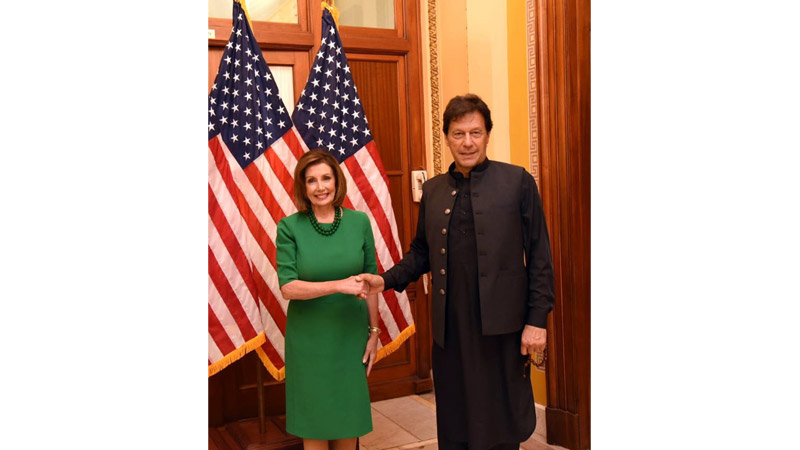 Prime Minister Imran Khan has said Pakistan has always close ties with the United States and expressed the hope to get back to the relationship which is based on truth and trust as well as mutual respect.

Speaking to the US Congressmen at the Capitol Hill, where a reception was held in his honour, the prime minister said the whole idea of his coming to US is to make the people in the United States have a better understanding of Pakistan.

He said unfortunately he felt that there has been a lot of misunderstanding. “Pakistan was not understood here, specifically in the last 15 year when the war on terror was being fought in Afghanistan and on the border of Pakistan. A lot of misunderstanding between the countries and the governments exists,” he said.

The prime minister told the US Congressmen and senators that what he hopes is that by the time he will leave he will have the people there understand his point of view. “We were fighting the US war of terror as Pakistan had nothing to do with the 9/11; Al Qaida was in Afghanistan and there were no militant Taliban in Pakistan. We joined the US war, but unfortunately when things went wrong and when I blame my government as we did not tell the US exactly the truth on the ground, part of the reason was that our government was not in control. There were 40 different militant groups operating within Pakistan,” he said. “So Pakistan went through this scare, so why the US expected us to do more and help US in this war,” he said, and added that Pakistan is now fighting for its own existence.

The prime minister said he met President Trump and Secretary of State Mike Pompeo and explained to them the way forward, and that the relationship has to be based on mutual trust. “Trust me, I will be telling the truth, I will be telling the US what we can do in this peace process. Pakistan is now trying to gather Taliban at the negotiating table to start this dialogue and so far we have done pretty well, but it is not going to be easy,” he said, adding it should not be expected that it will be very easy.

He said the situation in Afghanistan is very complicated, but assured the US leadership that the Pakistan government will be trying its best as the whole country is standing behind him. “We all have the same objective, and it is exactly the same objective the US has, and which is a peaceful solution of the Afghan issue as quickly as possible,” the prime minister said, and expressed the hope that from now onward relationship between the two countries will be at different level. “It was painful for us to watch this mistrust. Pakistan has been an ally of the US since SEATO and SENTEO in the 1950s, then again in Jihad when the Soviet attacked Afghanistan. So we were again on the same page. We were in the US war after the 9/11,” he said. “From now onward, our relationship will be on truth and trust and I think Pakistan has a great strategic location and a unique place in the world. It has two of the biggest world markets,” he added.

Earlier, US Congress Speaker Nancy Pelosi, other congressmen and Co-Chair of Pakistan-US Caucus welcomed and warmly received the prime minister at the Capitol Hill. They appreciated the role Pakistan is playing especially in the Afghan peace process. They said Pakistan-US relations are very important and hoped that with the visit of the prime minister, economic ties between the two counties will further grow. The US will cooperate with Pakistan in education and renewable energy sectors, they added.

Congresswoman Jackson Lee thanked the prime minister for visiting the Congress and expressed the hope that relations between the two countries can be deepened by enhancing exchanges between the parliamentary representatives of both sides. The members presented Imran Khan a copy of the special resolution which had been introduced in the Congress to welcome the prime minister’s inaugural visit to the US and to reaffirm the continuing support and commitment to the long and enduring friendship between Pakistan and the US. Senior senators including Gary Peters, Sherrod Brown and Chris Van Hollen, and several members of the House Foreign Affairs Committee also attended the meeting on special invitation extended by Caucus Chair Congresswoman Sheila Jackson Lee (D-TX).