Pakistan will proceed further by remaining within ambit of law: FM 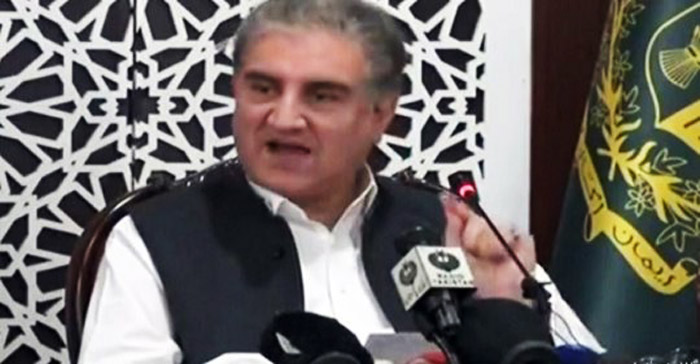 Foreign Minister Shah Mahmood Qureshi Wednesday welcomed the ruling of the International Court of Justice (ICJ) over Indian spy Kulbhushan Jadhav case which vindicated Pakistan’s stance regarding involvement of a serving Indian army officer in the espionage and terrorism activities in the country.

Addressing a press conference after the ICJ announced its findings at the Peace Palace The Hague, the minister said the ruling has not accepted Indian stance and its pray for the release of its spy. Congratulating the nation, Qureshi said he feels great satisfaction over the ruling which is a ‘victory for Pakistan’. He said by respecting the verdict, Islamabad will proceed further on the matter by remaining within the ambit of laws of the land. “India still has the right of review and appeal, so we don’t want to make any unnecessary comment on the issue,” he said in response to a question.

Pakistan, he said, has emerged triumphant in the case which is a moral victory. The ICJ’s findings are ‘suitable’ and a ‘welcoming decision’, he added. He said Pakistan is a responsible country which has adopted a very responsible attitude throughout the proceedings. “On a short notice, we appeared before the ICJ and accepted its jurisdiction, and indicated to respect its decisions,” he said.

Qureshi said the findings are also an implicit recognition and acceptance of Pakistan’s stance regarding Jadhav’s involvement in the espionage and terrorism activities to which he has also voluntarily admitted. He said in its ruling regarding review and reconsideration over the case, one thing must be taken into notice as the court held ‘by means of its own (Pakistan) choosing’ implied that Pakistan will itself decide over it. The ICJ has expressed its confidence in the justice and legal system of Pakistan, which is also an implicit acknowledgement, he added.

The minister said India approached the ICJ by claiming that Commander Jadhav was innocent and false allegations were leveled against him so he should be released immediately. “After the conviction, Jadhav had different legal forums available in Pakistan: he could have filed his review, he could have approached the high court and then the apex court, and after availing all those forums, he could have moved a clemency appeal. But instead, the Indian side approached the ICJ,” he said, adding that it is interesting to note that the ICJ has not annulled the military court’s conviction and sentence handed over to Jadhav. He said the ICJ’s findings are ‘a pleasant commentary on the Pakistan’s legal system’ which was comprehensive one. “A serving naval officer was arrested after travelling on an authentic Indian passport, so where his trial will be held as the Army Act is clear on it,” he said, adding the Indian Army Act has the same procedure. He said the customary laws were applied to the arrested spy.

“Commander Jadhav shall remain in Pakistan. He shall be treated in accordance with the laws of Pakistan. This is a victory for Pakistan. #KulbhushanVerdict,” the minister later posted on his twitter handle.