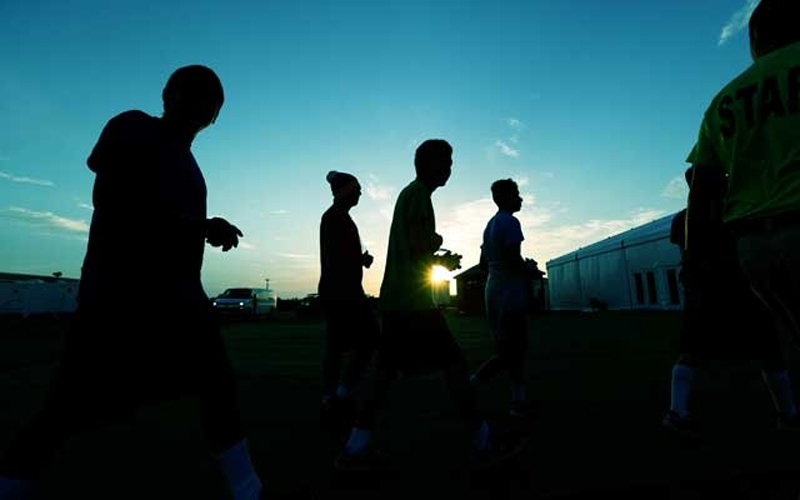 US border officers were detaining about 200 unaccompanied children along the southern border on Wednesday, down from more than 2,500 in May, thanks to congressional funding increases, a senior border agency official said. The reduction follows a pair of government inspections that revealed overcrowding and filthy conditions at border detention facilities, inflaming the debate about President Donald Trump’s hard line immigration policies. The emotions of that debate were on display Wednesday during a congressional hearing in Washington, where a Guatemalan asylum seeker brought US Representative Alexandria Ocasio-Cortez to tears and left others visibly shaken with the story of her 19-month-old daughter’s death, saying she had contracted a deadly lung infection during a 20-day detention. “The world should know,” Yazmin Juarez told a House of Representatives subcommittee, adding that it was “like they tore out a piece of my heart” when, just weeks after they were released, her daughter Mariee died.

Meanwhile, the Trump administration renewed threats to carry out widespread roundups of immigrants who are eligible for deportation. “They are absolutely going to happened,” Ken Cuccinelli, the acting director of US Citizenship and Immigration Services, told reporters. Trump has raised the prospect of detaining “millions” of people, while Cuccinelli said about a million people had exhausted their legal appeals and were eligible for deportation. Amid the provocative rhetoric, a senior US Customs and Border Protection official offered the more consolatory news that the controversial detentions of children by the agency were down to about 200. From late May to early June, border authorities held about 2,500 to 2,700 children who were detained after crossing the border by themselves or who were separated from adults who were not their parents, the official told a reporters on a conference call on condition of anonymity. Almost all unaccompanied children picked up by border officers are being turned over to the US Department of Health and Human Services (HHS) within 72 hours of apprehension, the official said.

“To see these numbers currently at about 200 is very positive. That’s a huge difference since HHS has received their funding,” the official said.

The US Congress in June approved a $4.5 billion emergency supplemental funding bill aimed at improving conditions at the border, including $2.88 billion for the HHS to provide shelter and care for unaccompanied children.

Criticism mounted after government inspectors and immigration lawyers found evidence that children were being held long past legal limits at facilities not equipped to house them. Increasing numbers of mostly Central American families and children travelling alone – many seeking asylum in the United States – have overwhelmed authorities at a time when the Trump administration is pushing to limit legal and illegal immigration. Border officers are turning children over to facilities run or funded by HHS such as a tent camp that just opened in Carrizo Spring, Texas, about 80 miles (130 km) northwest of Laredo.

“I like how they have treated us,” said one teenage boy from El Salvador during a brief period when reporters were allowed to speak with detainees.