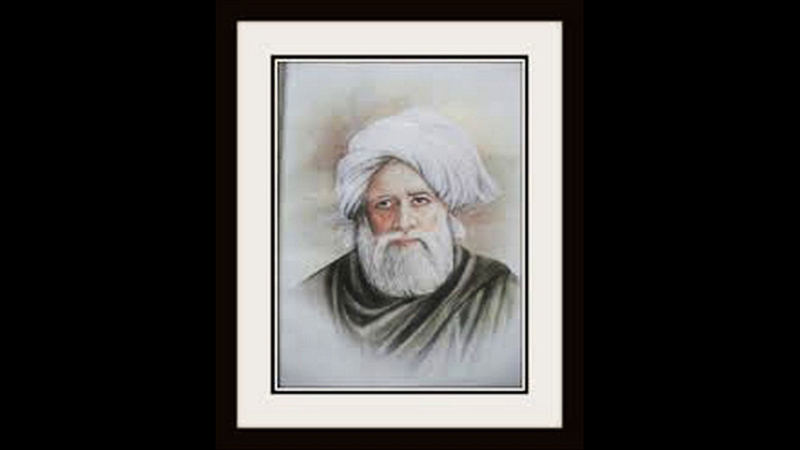 History of mankind is replete with examples of ruthless oppression of the week and the marginalisation of the powerless. But subjugation never goes unopposed because of the inherent desire in man to be recognised by others as a free conscious being having a unique identity. At every point in history there have been people who spoke against the tyrannical ruler, religious bigotry and social repression of dissenting opinions. In 18th Century Punjab Baba Bulleh Shah, a Sufi saint, raised voice against the oppressive institutions of the society and questioned the very basis of everything that was taken for granted. His defiance of the hierarchical structure of society and religious beliefs that were propagated by the clergymen of his time made him an object of hatred for Mullahs and Pundits. His poetry intended to bring together people separated by the boundaries of religion, caste and class. Bulleh Shah desired an aesthetic community that would be based on communal amity.

Baba Bulleh Shah’s poetry and life has another very important aspect that has not been given much attention.

In his poetry, one can observe his hatred for gender oppression and inequality engendered by patriarchal social constructs. He masked his poetry in female voice on the one hand, to express his thoughts of love and peace and on the other hand, to counter the patriarchal hegemony of 18th Century Punjab. At a time when women fettered by the social norms were turned into domestic slaves and were denied the right to have an identity, Bulleh Shah emerged as a poet whose voice became the voice of the oppressed. His poems often assumed the form of a dialogue between women who complain about their unhappy lives and express the desire to break free from the tiresome routine of their lives in which they do not have the autonomy to make decisions.

Here Bulleh Shah portrays a woman who is working on a spinning wheel is annoyed and wearied of performing the same task over and over again. The spinning wheel here actually represents the sameness of a woman’s life where she completely lacks the power to make decisions for herself. All the decisions about her life are made by others and she spends the rest of her life in domestic slavery. However, towards the end of this Kafi her spinning wheel breaks down and she takes a sigh of relief, Bulleh Shah invokes a feeling of ‘liberation’, thus, indicating that to smash the manacles of patriarchal bondage to smithereens is not an unsurmountable task for women.

To rebel against the patriarchal system is not an easy task for a woman in two ways: first, most of the women in our society are socialised in a way that makes them narcotised and anesthetised as a result of which they are unable to recognise the injustice that is being done to them. This is because every act of repression is normalised by making servility and submissiveness a part of her personality. Secondly, if a woman decides to liberate herself from the yoke of the oppressive social norms, then she has to face immense pressure from the society to harmonise and mould her individuality upon a model that is accepted by it. But Bulleh Shah shows us through his poetry that the norms, inequality and hierarchical arrangement of the social apparatus are mere constructs and are not given the stamp of approval by the divine decree.

In his poetry, one can observe his hatred for gender oppression and inequality engendered by patriarchal social constructs. He masked his poetry in female voice on the one hand, to express his thoughts of love and peace and on the other hand, to counter the patriarchal hegemony of 18th Century Punjab

“Meri Bukkal De Vich Chor” is another poem in which Bulleh Shah shares with us a secret conversation going on between two sahelian (female friends):

There is a thief in the folds of my cloak

O hermits! to whom shall I complain? There is a thief in the folds of my cloak

Stealthily he escaped, and a tumult arose in the world

There is a thief hiding the folds of my cloak

A woman is sharing with her friend, behind the closed doors, that there is a thief hiding in the folds of her wrap. The thief here could be her lover or a rebellious idea developing in her chest. Tired of her monotonous life she has decided to go against the norms, the thought she is fostering in her mind smells of revolt, defiance and insubordination. She is questioning the norms and morality, prevalent in the society, which have been hitherto defined by men only and do not consider the world as it is experienced by women.

Bulleh Shah averred that there comes a point when revolution becomes inevitable and can no longer be prevented from occurring. By expressing his thoughts through a female voice Bulleh Shah did not only renounce the ideas of male superiority and female inferiority, but also rendered such ideas as absurd abstractions. In fact, in his own life Bulleh Shah at every step openly resisted every norm that demanded from him to fashion his individuality upon a model approved by the society. It is said that Bulleh Shah once donned himself in a female attire and gave himself a completely effeminate appearance by putting on plaits in his hair. Pivoting on his heel he danced in ecstasy in order to please his master Shah Inayat. His non-conformity displeased the religious figures and was ridiculed for dancing and staying with hijras (eunuchs).

Bulleh Shah raised the question of identity; he refused to accept the dictates of political and religious authorities; in his poetry he eloquently encapsulated the plight of the marginalised women. He became the voice of the oppressed and raised the same kind of questions that we see resonating in today’s feminist struggles. These movements struggling for the empowerment of women are those asking about who we are, how we live and who is accountable for the situation in which we are today like Bulleh Shah who famously asserted Bullah Ki Jana Mein Kaun. Such questions arise when a particular group of a society is facing an identity crisis, and when they find themselves trapped on the bottom rung of the society they break the silence and struggle for emancipation.

The religious establishment of his time did not allow the imams to offer his funeral prayers because of his aberrant and non-conformist life and poetry. But today Baba Bulleh Shah’s shrine in Kasur is visited by thousands of devotees from across Punjab and other provinces every year on his Urs. He who was denied the right to have a proper burial and was declared infidel, blasphemer and heretic by the Mullahs is revered as one of the greatest Sufi saint.

The writer can be reached at shahameerkhan171@gmail.com