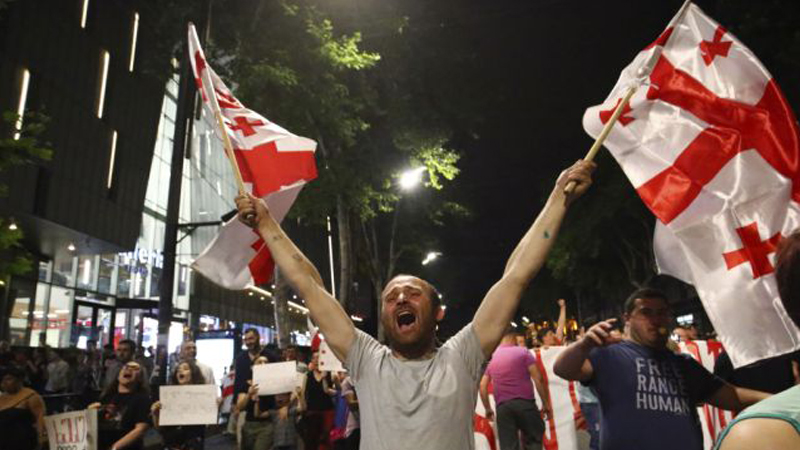 The head of Georgia’s ruling party announced sweeping electoral reforms Monday in a bid to appease protesters after days of demonstrations gripped the capital Tbilisi.

Parliamentary elections next year will now be held under a proportional voting system, he said, meeting a key demand of protesters who denounced the existing system as favouring Ivanishvili’s Georgian Dream party. There will also be no threshold for parties to enter parliament, Ivanishvili said.

“We will have a parliament where all the existing political actors will be represented.”

The protests, which erupted on Thursday, have seen thousands take to the streets of Tbilisi on consecutive nights and clashes with police firing tear gas and rubber bullets.

It was unclear whether the announcement would be enough to mollify protesters, who were also demanding a snap vote and the resignation of Interior Minister Giorgi Gakharia.

Another demonstration was planned for Monday evening.

Elene Khoshtaria, one of the leaders of the opposition European Georgian party, said the reforms were the “first results” of the protest movement. But she also slammed the “shameful decision to keep Gakharia in his position”.

The protests have sparked a political crisis and raised tensions with Moscow to levels not seen in years.

They erupted after a Russian lawmaker addressed parliament from the speaker’s seat last week, a hugely provocative move for two countries whose ties remain strained after a brief war in 2008.

The rallies evolved into a broader movement against Ivanishvili, a billionaire businessman widely believed to be calling the shots in Georgia.

Demonstrators gathered in front of the imposing building of Georgia’s parliament, flooding the capital’s main Rustavi Avenue and blocking traffic.

Protest placards took aim at Ivanishvili and Russian President Vladimir Putin who, in response to the protests, banned Russian airlines from flying to Georgia and Georgian air carriers from travelling to Russia.

The first day of the protests saw a violent police crackdown that left 160 demonstrators and 80 police officers injured. More than 300 people were arrested.

Media reports said several protesters –- including a 19-year-old girl — lost their sight after being hit by rubber bullets.

Ivanishvili said Monday that both those who provoked the violence and those who used excessive force “must be punished”.

He has accused opposition leaders of inciting protesters to storm parliament.

The Kremlin has branded the protests a “Russophobic provocation” and suspended air travel from July 8, a move criticised by many Russians who frequently holiday in Georgia.

On Monday, Russian consumer watchdog Rospotrebnadzor said it had noticed a “deterioration” in the quality of Georgian wine and had “tightened control” of all Georgian alcoholic beverages entering Russia.