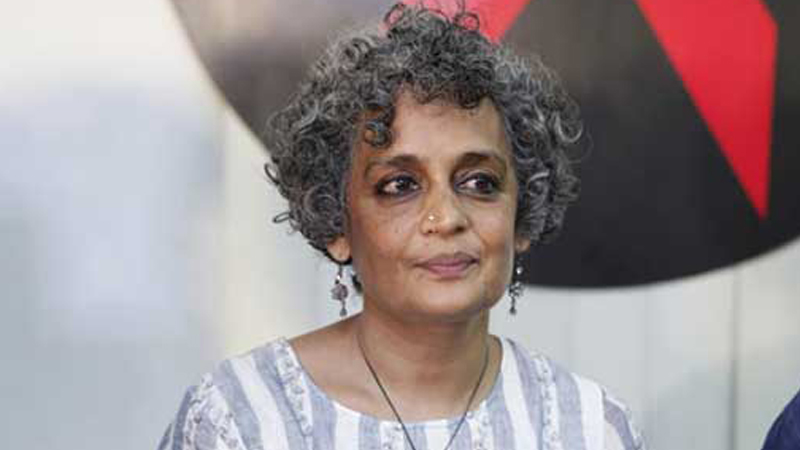 I found it difficult to sleep the night before March 5. After all, writer Arundhati Roy was supposed to speak at a Chobi Mela session that day.

I absolutely hated having to wait to see my idol in flesh and blood.

I woke up to an email notification which read that the session, ‘Utmost Everything’, had been cancelled. For a moment, I thought my eyes had been blurry and mistook ‘confirmation’ of my registration for ‘cancellation’ of the event.

Logging onto social media, I found my friends tagging me in posts that had borne the bad news. I was angry, agitated, disoriented and in denial.

I wanted to deny the news floating in the air with every nerve of my body. I have always been that sort of person who would still keep unreasonable hopes even in the face of adversity.

Such hopes have helped me sail across turbulent moments in various stages of life.

So after the news broke out, I kept on pestering my friends, “Do you think they are actually not going to manage anything?” “Is the talk really cancelled?” “Should I have hopes?” They all replied in the negative. After all, they were reasonable and realistic people. Despite them having convinced me that the talk wasn’t happening, I tried finding slivers of hope everywhere. I inboxed Chobi Mela’s page and emailed them. I was waiting for a miracle to happen, like every Arundhati Roy devotee.

At last, the Chobi Mela team could successfully find a place to conduct the session. We were all cupped in the palms of happiness. Excitement flooded our nerves. I frantically forwarded the message to all the relevant people. I expressed my throbbing sentiments in caps lock in the comment section.

It was finally happening. Our eyes ached to witness the coveted magical moment.

The afternoon weather was pleasant that day unlike the rain soaked gunmetal morning. The sun had beat down on the Dhanmondi neighbourhood in its pleasant glory. It was as though both the variations in the weather had been there to complement the turbulence and the victory-the program being cancelled and again brought to life.

When my friend and I reached the venue two hours early, the compound had been filled with known and celebrated faces. We felt as though we hadn’t belonged there or we had arrived at a wrong time, a way-too-early time.

Seeing the compound get filled with people minute by minute, I started getting anxious. Would I even find a place inside the room where the talk would be happening?

I met people I admired and bonded with them for the first time in a non virtual world.

Though our legs grew weary from standing there, waiting for a great deal of time, we never allowed it to trouble us. As if the fact that Roy would be there in a matter of few hours was a sort of ointment.

The sun bade us goodbye, taking its glory back to itself. The entrance area turned into a huge knot of people. One line bled into another. The air was heavy with the stench of sweat. The claustrophobia was both unbearable and bearable. I never let my guard off. No one could their guard off and let others fill the spots before them.

We were in the knot for around thirty minutes or so. At one point, I was the one leading the line that had emerged from the messy amalgamation of people. Rahnuma Ahmed appeared from the inside and told me, “Arektu dhorjo dhoren. Apnara ektu porei dhukte parben.” (Please be patient, you’ll get to be inside in a few minutes) Her smile was contagious and her behaviour reassuring. I nodded in agreement.

We were finally in the hall. There, I reunited with my friends whom I had lost in the crowd. As we waited, we were told not to take photographs. I still don’t know why there had been restrictions.

After many fleeting moments, there she was. The crowd became alive and broke into a carnival of joy. She smiled at us and flashed a sign of peace at us. We clapped and clapped. My body grew electric. Roy was actually right there in the same room as me. It was not a talk of hers that I was watching on YouTube. It was the reality, beyond the algorithm of YouTube and other websites, beyond the boundary of my monitor screen.

My heart-beat rose and fell. We were all so happy.

Although I couldn’t take photographs with her, couldn’t get my book signed, I’ve made peace with the fact that I have seen her and heard her speak with the familiar essence she oozes from her talks which are virtually available.

In an interview with The Guardian, she had said, “So being unreasonable is the only way we can have hope.” That evening, I felt that. Word by word. We can expect good things our way even though the atmosphere is hostile. We can expect pleasant surprises in the face of soul-crushing distress. We can be crazy, illogical, and still have hopes when others advise not to. We can expect our economy to flourish, our dying forests and tigers to live, our persecuted communities to become the un-persecuted, our ozone layer to hold on a little longer as we promise we won’t emit more carbon dioxide, and our sea levels to remain normal and not swallow the coastal people.

The writer is a journalist based in Dhaka and is an avid follower of South Asian Literature. He can be reached at [email protected]