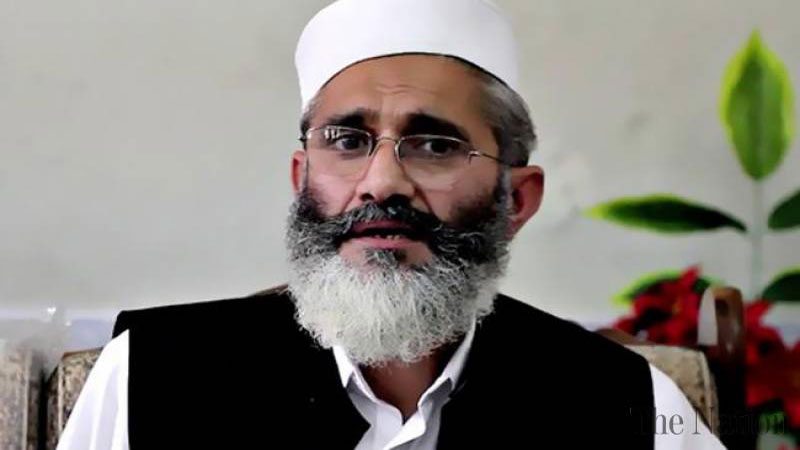 Jamaat-e-Islami (JI) ameer Senator Sirajul Haq on Sunday criticised the Pakistan Tehreek-e-Insaf (PTI)-led government for inducting an “IMF agent” as the finance adviser in place of an elected representative.

Addressing thousands of people joining the JI march against price hike, unemployment and IMF slavery at the Shahrah-e-Quaid-i-Azam, Siraj announced that the party would hold such marches in all big cities of the country.

He said the government had removed elected finance minister Asad Umar, inducted an IMF agent in his place and handed over to him the keys to the public exchequer as well.

Thousands of women and children also joined the march, which began from the Masjid-e-Shuhada and culminated at Charing Cross, where the JI leaders addressed the crowd. The participants carried banners condemning the unending price spiral, ever-increasing unemployment and the government decisions placing the homeland in the IMF slavery.

Sirajul Haq said that the budget had jacked up the prices of essential items, including pulses, flour, sugar, cooking oil and cement, hence multiplying the miseries of the common man. The prices of medicines had also increased tremendously, he said.

He said the JI could not remain silent on the indifference of the government to the hardships of the masses. It would organise the nation against injustice and oppression and launch a full-fledged movement for this purpose, he said. He said the next march would be held in Faisalabad on June 23.

He said the objective of the JI movement was to free the masses from the oppressive price hike and the IMF slavery, and it would not join any campaign aiming at securing the release of people put into jails. Sirajul Haq said that out of the next year’s budget, a huge sum of Rs 2,828 billion would go to the payment of interest on loans. He said the real objective was to put the country into chains through heavy loans and then to usurp its independence.

He said the prime minister had said that governing the country was not so difficult. He said if the prime minister was aware of the hardships of the masses, especially hunger and poverty, he would not have uttered these words. The JI chief said that the prime minister, after assuming his office, had promised that he would not tell a lie to the nation. “But now he is taking U-turn on every issue.” Again, he said that Imran Khan had also said that begging the IMF was tantamount to committing suicide, but now he had placed the economic system and the public exchequer in the hands of the IMF.

The prime minister, he said, had talked of the Madina state but now he was even uttering objectionable remarks about the companions of Prophet Muhammad (PBUH).