Tibet hosts forum to pool wisdom for development and opening-up 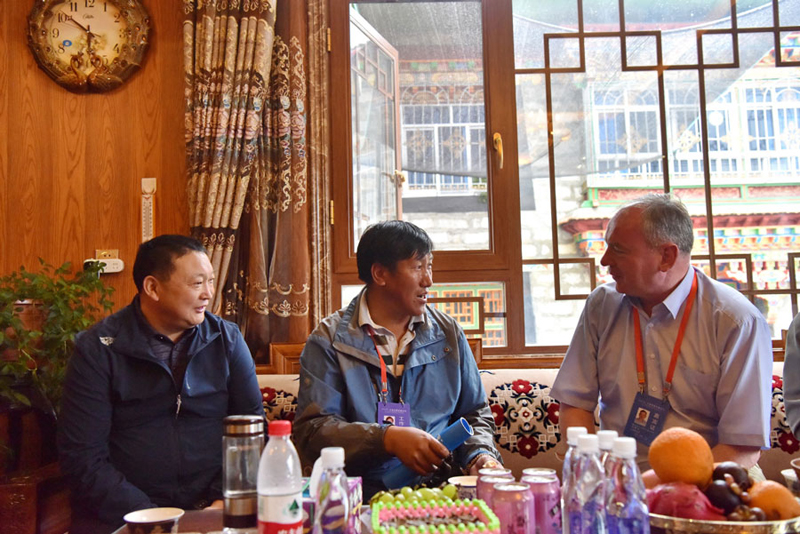 The 2019 Forum on the Development of Tibet opened on Friday in Lhasa, capital of Tibet Autonomous Region, in southwest China.

The one-day forum, hosted by the State Council Information Office and the people’s government of Tibet Autonomous Region, gathered nearly 160 scholars and officials from 37 countries and regions.

President Xi Jinping sent a congratulatory letter to the 2019 forum, expressing hope that Tibet will seize the opportunities for development, build a beautiful and happy Tibet, flourish its fine traditional culture, protect the plateau’s ecological environment, implement a more active policy of opening-up, conduct extensive international exchanges and cooperation and draw a new picture of Tibet’s development in a new era.

“Under the leadership of the Communist Party of China, Tibet has realized the most extensive and profound social transformation ever in its history in just a few decades, with about one million serfs emancipated and becoming masters of the country and society,” the letter read.

“The forum aims to pool the wisdom of experts and scholars from all over the world, to jointly push forward the steady progress on the Belt and Road cooperation and promote Tibet’s better integration into the building of the Belt and Road for its development, progress and modernization,” said Ding Yexian, a senior Party official of Tibet, at the opening ceremony.

As an important participant of the ancient southern Silk Road route, Tibet has unique geographical advantages to join the building of the Belt and Road. The region is also an important land passage for China’s opening-up toward South Asia.

The region will seize the opportunities to further the opening-up policy, keep expanding the scope of opening-up, further promote foreign economic and trade cooperation and deepen people-to-people and cultural exchange, said Losang Jamcan, director of the Standing Committee of the Tibet Autonomous Regional People’s Congress.

“We warmly welcome people from all over the world to visit Tibet for tourism, exchange and cooperation, experience the mystery of Tibet and its beauty and achieve win-win results,” he said.

“I think it is highly symbolic that we are all in Tibet today, as it has played an important role in the whole Silk Road trade route, being the gateway to South Asia,” said Vjaceslavs Dombrovskis, chairman of the Group of Cooperation Promotion toward China, Parliament of the Republic of Latvia.

“The Nepalis who have been residing in Tibet for generations are the best example of people-to-people exchange. And I expect more people-to-people and cultural exchanges between the two sides,” he said.

Erik Robert Nilsson, an American journalist of China Daily, said it was the second time he had attended the forum, and this year, he learned so much about “how Tibet’s increasing prosperity is mutually reinforcing China’s exchanges with other countries and regions, and how it is becoming a major node of the Belt and Road Initiative.”

Prior to the forum, the delegates visited villages, elementary schools and maker-spaces in Nyingchi of southeast Tibet and held talks with people from various walks of life.

In the regional capital Lhasa, they visited a welfare facility, a hospital specialized in Tibetan medicine and a high school. They visited the Potala Palace, Jokhang Temple and Barkhor Street to learn first-hand about the protection of cultural relics and traditional culture in Tibet.

The delegates also visited a memorial hall that marks the emancipation of serfs. This year, Tibet celebrates the 60th anniversary of democratic reform that abolished serfdom.