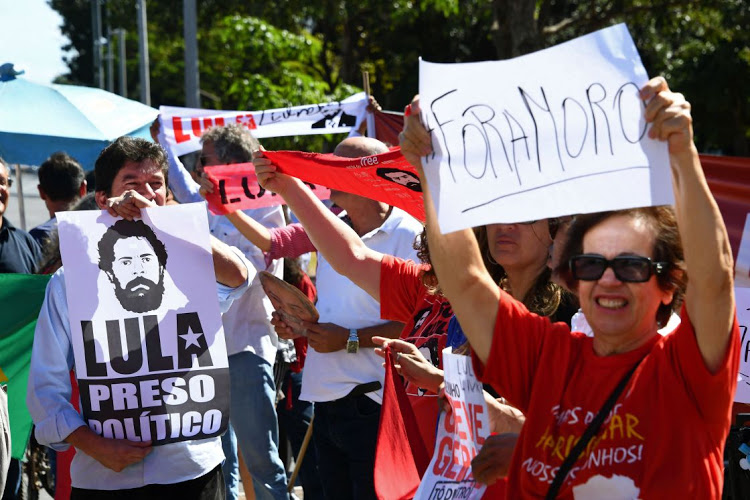 The Intercept website published a series of explosive articles Sunday based on material provided by an anonymous source that it said show “serious wrongdoing, unethical behavior, and systematic deceit” in the sprawling Car Wash investigation that has claimed scores of political and business scalps since it began in 2014.

Claims that Justice Minister Sergio Moro — the anticorruption judge who handed ex-president Lula his first conviction in 2017, effectively ending both his election hopes and decades of center-left rule in Brazil — collaborated with prosecutors to convict and jail the popular ex-politician were a “setback” for the probe, Christopher Garman of Eurasia Group told AFP.

But strong public support for the anti-graft drive meant they were unlikely to result in overturning convictions or Moro’s resignation.

“In the public imagination it is not at all shocking or something that undermines the legitimacy of the whole effort,” Garman said.

While the revelations would fuel the “free Lula” movement and “give fodder” for legal challenges to ongoing investigations, the most Lula could hope for was a fast-tracking of his release into home detention, he added.

“They do not change, in substance, the reason for the convictions even though they reveal inappropriate comments (by investigators),” said ex-president Fernando Cardoso in remarks published by the UOL website.

There could be “some fallout, probably, but no big deal,” David Fleischer, a political science professor at the University of Brasilia, told AFP.

Debate over the leak of Telegram messages erupted on Twitter, with #EuApoioLavaJato (#ISupportCarWash) and #EuApoioTheInterceptBR (#ISupportTheInterceptBrazil) among the top trending topics in Brazil, highlighting the country’s deep political divisions under President Jair Bolsonaro, who took office in January.

Bolsonaro, normally quick to denounce critics on Twitter, will refrain from commenting on the case until he meets with Moro on Tuesday, his spokesman said.
Car Wash chief prosecutor Deltan Dallagnol posted a video on Twitter defending his team’s contact with Moro, saying it was “normal” for prosecutors and lawyers to speak with a judge in the absence of the other party.

“Trying to imagine that the Car Wash probe is a partisan operation is a conspiracy theory with no basis,” he said.

Among the claims, The Intercept said Car Wash prosecutors had expressed “serious doubts whether there was sufficient evidence to establish Lula’s guilt.”
The leaked material also shows “prosecutors spoke openly of their desire to prevent the PT (Workers Party) from winning the (2018) election and took steps to carry out that agenda,” The Intercept said.

And Moro repeatedly “overstepped the ethical lines that define the role of a judge” by offering prosecutors advice and tips for “new avenues of investigation,” the site said.

The messages also show conversations among prosecutors over how to block a Brazilian newspaper from interviewing Lula during the election campaign for fear it would help the PT win.

“The material we have is huge,” The Intercept executive editor Leandro Demori told AFP.
“We’ve only looked so far at a very small part of it.”

In response to the reports, Moro defended his actions and cast doubt on the authenticity of the messages hacked from prosecutors’ cell phones.
“They are things that happened, if they happened, years ago,” Moro was quoted by news website Antagonista as saying.
“I don’t keep these, I have no record of this.”

Lula, who led Brazil through a historic boom from 2003 to 2010, earning him the gratitude of millions of Brazilians for redistributing wealth to haul them out of poverty, has denied all the corruption charges against him.

He has long argued they were politically motivated to prevent him from competing in the elections.

Lula is serving a reduced jail term of eight years and 10 months after being convicted of accepting a seaside apartment as a bribe for helping the OAS construction company get lucrative deals with state oil firm Petrobras.

While behind bars, Lula’s Workers Party registered him as their presidential candidate in August 2018 — two months before the election he was widely expected to win.
An electoral court barred him two weeks later and Bolsonaro went on to win the ballot.