The legend of Atmaram Ji’s Samadhi

* I am hopeful that very soon, this place will become a tourist destination as well as a religious tourism spot because Jain people respect this place 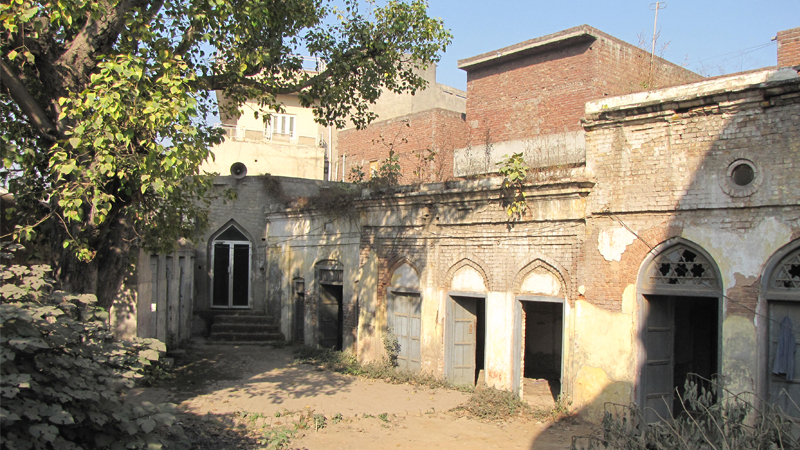 For years, the Samadhi of Atmaram Ji remained a neglected piece of past occupied by the locals and filled with several encroachments. Luckily, I read the news that it has been declared as a protected monument under the Punjab Special Premises (Preservation) Ordinance 1985 by the Affairs, Sports, Archaeology and Tourism Department Government of Punjab and very soon its conservation will also start.

Now, I am hopeful that very soon, this place will become a tourist spot as well as a religious tourism spot because the Jain people respect this place and have been raising the matter for its preservation in the past.

You must be thinking where this place is! Well the Samadhi of Atmaram Ji is in Gujranwala which can be declared as one of those cities of Punjab that have a rich history and heritage. Although Gujranwala is relatively a new city but village and community existed in this area since long. The foundations of the city were laid down somewhere in 1758, when Charat Singh constructed a small mud fort at Sirai Kambohaan. With the initial Sikh settlements in Gujranwala, there grew the trend of construction of gurdwaras, mandirs and havelis and today also in Gujranwala and in its suburbs you will see traces of Sikh Samadhis and havelis.

Do you know that the Havelis of Maharaja Ranjit Singh and his ancestors are still found in this city, but are not very well maintained neither they were turned into tourist spot whereas I think if we start religious tourism there it would be a huge success. Same is the case with the Gurdawara, Temples and Samadhis.

Similarly there is another unexplored gem in the city of Gujranwala which is the tomb / Samadhi of Atma Ram Ji and it is believed by the Historians that this was a Jain Mandir and so do the Jain community believes. The citations of this Mandir are given in different books on Jain religion and the chronicles tell that the building was a Jain Mandir built in memory of a great Jain scholar Shri Atma Ram Ji.

Now you must be thinking who Atma Ram Ji was and why so revered? So let me tell you about him first and then we move on to the structure and built of Samadhi. So according to the Jain sources and references it is said that Acharya Vijayanand Suri, also known as Atma Ram Ji of Gujranwala, was the first Swetambar Murtipujaka Jain monk in modern times to receive the title of Acharya. He was given the title of Navyug Nirmata by his disciple Vallabhsuri.

According to historic references, his father was an army official of Ranjit Singh. He was initiated at the age of sixteen and was given the name of Atma Ram Ji.

You must be thinking where this place is! Well the Samadhi of Atmaram Ji is in Gujranwala, which can be declared as one of those cities of Punjab that have a rich history and heritage. Although Gujranwala is relatively a new city but villages and communities have existed in this area since long

It is said that Atma Ram Ji began the study of Jain scriptures along with his fellow ascetics. He died in Gujranwala on 20 May 1896.

A memorial shrine dedicated to him was built there.

Further according to historic facts about him we get to know that he was born in the village of Lahara, District Ferozpur on the first of Chaitra Shukla in 1837, now this place is in India. He was Brahma Kshattriya by caste and his father’s name was Ganeshchandra and mother was Rupdevi. His father was a soldier in Ranjeet Singh’s army and died fighting when Atma Ram Ji was a small child. Later his mother moved to Hushiarpur where he was brought up by his mother. His mother started working with a family who belonged to Jain religion and so the story of Jainism began.

Atma Ram Ji began meeting influential Jain people and scholars while staying there and thus got influenced with the preaching and teachings.

Atma Ram Ji studied Hindi and Arithmetic and at times he used to visit Sthanakvasi Sadhus of the place and began to study about religion. In 1853 CE he was initiated as a Sthanakvasi Sadhu. His intellect was keen. He used to memorize almost 100 verses in a day.

He had learnt the Shastras from the Sthanakvasi Sadhus, but he started doubting the interpretations given by them. Later he began to study Sanskrit Grammar and other philosophical and logical works with a Pandit. He fearlessly gave up the Sthanakvasi doctrine and came to Ahmadabad in 1875. He was initiated as a Swetamber Sadhu by Buddhivijayji, a Jain Sadhu of the place. In 1886 he went to Palitana, Kathiawar, and stayed there for four months during the rainy season. Then he travelled on foot from Gujarat to the Punjab. During the travel he brought to light the hidden Jain Literature. The Jain Bhandars of different places of Rajputana were examined by him. He got many old important manuscripts fairly copied out.

For many years he lived in the Punjab and his prominence spread through different parts of the country. Many people of other sects came and discussed with him the matters of religion. He answered their arguments in a gentle, considerate and composed style. His attitude was inspirational, and the hearers were at times overwhelmed at his unusual skill of responding to the questions. His ideas were noninterventionist rather liberal and he was serene and calm in character.

Atma Ram JI in 1892 received an invitation from Chicago to attend the World’s Parliament of Religions. On account of religious and personal restrictions he could not go, but he sent his representative, Virchand Raghavji Gandhi BA, to Chicago to represent Jainism at the Parliament.

Many Jain temples were built in the Punjab after his teachings and about 15000 persons were converted to Jainism by his vigorous and tireless efforts. Many pathshalas and libraries were established by him in the districts of the Punjab and in different other parts of the country. Spending his life in doing good deeds he passed away in 1896 in Gujranwala. His remains were preserved by the disciples and they constructed his Samadhi which is this place I am writing about.

Now let us come to the structure of this building. You will see that it is divided into three parts. As you go in the main building it houses Atma Ram Ji’s funerary urns and that is why this place is called the Samadhi as well. It is said that one building was used as a temple and the other one was a residential area. Many artefacts and decorative items from this building were taken to the Lahore Museum and you can still see them in the Jain Gallery. The historic books state that the building was constructed beautifully using marble and red tiles. You will see beauty of architecture in this building and once you reach there you will be awestruck with the intricate exterior and interior. There are beautiful domes on the building and carving on the walls. The corridors are an amazing view and one can imagine the past glamour of this building while standing in the strong arches which are a footprint of the history. A history plaque is placed there which states that the building was erected by Lala Maya Das Nanak Chand Bhabras of Gujranwala and you can see the same written in different languages.

The building, despite misuse and negligence, is still a masterpiece and is a must visit place.