Opposition to hold protests against PTI govt after Eid

* Bilawal says all parties on same page vis-à-vis staging protests inside and outside parliament
* Maryam says new generation will keep on adding to CoD signed by Nawaz, Benazir 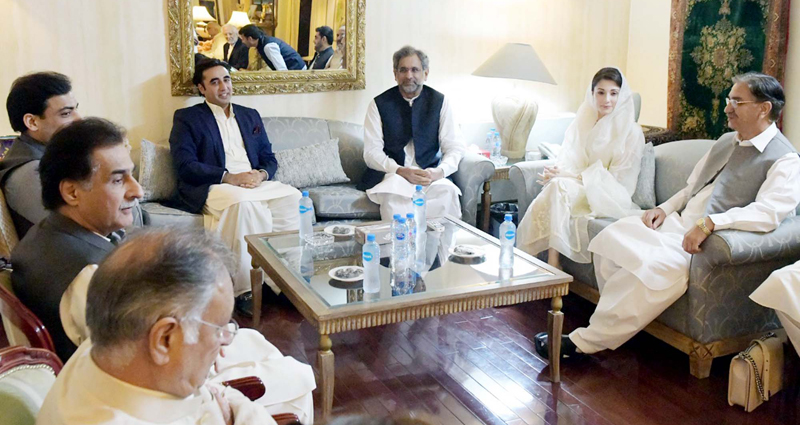 The opposition parties Sunday decided to hold an all-parties conference (APC) after upcoming Eid-ul-Fitr to formulate a strategy against the ruling Pakistan Tehreek-e-Insaf (PTI) government.

“The APC will be convened by Jamiat Ulema-e-Islam-Fazl chief Maulana Fazlur Rehman and discuss the opposition’s future course of action with regard to putting up a front against the PTI government,” Pakistan People’s Party (PPP) Chairman Bilawal Bhutto Zardari told a press conference following a major huddle hosted by him at the Zardari House in the federal capital. “The opposition parties will continue to meet for iftars and at various other instances. We will stage protests inside and outside the parliament,” he said, adding that all the opposition parties are on the same page in this regard. “We have decided to keep on meeting to discuss Pakistan’s issues and find solutions to the people’s problems,” he further said.

Bilawal said that every political party has its own manifesto and narrative, but owing to immense challenges facing the country, all opposition parties have decided to sit and devise a unanimous strategy to rid the country of ‘incompetent’ rulers. “Every political party has its own mission and vision and no single political party can resolve the issues that Pakistan faces right now,” he said, adding that all parties will also hold separate protests against what he termed the disastrous policies adopted by the incumbent leadership.

Bilawal also thanked the political leadership for joining the huddle. “Today we invited all the opposition leaders to this iftar dinner and I am thankful that they came,” he said, adding that the assortment of leaders talked about political, economic, democratic and human rights issues.

The Iftar-dinner was the first occasion when Bilawal and Maryam Nawaz met face to face as key leaders of their respective parties.

The JUI-F leader corroborated the plans announced by Bilawal, saying that Pakistan is emerging as a weak country in the world due to some incapable people ascending to power. He said the APC will be called in a bid to reach a consensus over the shared causes and course of action. He said during the APC, a joint strategy for all opposition parties will be identified so as to stabilise “this sinking ship.”

Abbasi said there is an agreement among opposition parties that PTI has failed to run this government.

“We will keep on consulting each other and after Eid, there will be an APC where it will be decided what the opposition’s joint strategy should be,” he added.

Abbasi said that despite the alliance, the opposition parties’ philosophy and take on policy matters could be different. He also said that “the goal as of today is not to throw out the government but to solve Pakistan’s problems such as inflation, and bringing economic stability.”

PML-N Vice President Maryam Nawaz thanked Bilawal for inviting her to the iftar dinner. “I accepted the invitation because Bilawal had paid us a condolence visit after my mother’s death which was our first meeting contrary to media reports,” she said.

She defended the Charter of Democracy (CoD) signed by former prime ministers Benazir Bhutto and Nawaz Sharif, saying that the civilian governments managed to complete two successive terms because of that accord. “This had never happened before,” she said. “That Charter of Democracy did not end there. The new generation will keep on adding to it,” she added. Maryam acknowledged that the PML-N and PPP have been arch rivals but said that “our upbringing is such that when we become allies we also do that with full sincerity.” Bilawal said that the CoD was not against the establishment, and stressed that “today’s gathering as well is not against anyone but is in favour of Pakistan and its people.”

National Party chief Mir Hasil Bizenjo said that the APC after Eid will give birth to a new and historic opposition alliance. He further said the opposition can overturn the incumbent government tomorrow if it wants but that’s not the only issue as there are now a plethora of other problems facing the country. Pashtun Tahaffuz Movement’s Mohsin Dawar said the matters of the state should be run as per the constitution. “The state of Pakistan can no more be run by defying the constitution. We all have consensus over one point that all policies should be made by the parliament,” he added. Among other leaders attending the huddle were Aftab Sherpao, Liaquat Baloch, and Shah Awais Noorani. Akhtar Mengal, Mahmood Khan Achazkzai and Asfandyar Wali Khan, however, excused themselves from attending the meeting due to prior personal commitments. Earlier, Maryam’s convoy, which included Captain (r) Safdar, former information minister Pervaiz Rasheed and party spokesperson Marriyum Aurangzeb, met at Shahid Khaqan Abbasi’s residence where a meeting was held. Hamza Shahbaz also joined in shortly before the PML-N delegation left for Zardari House.