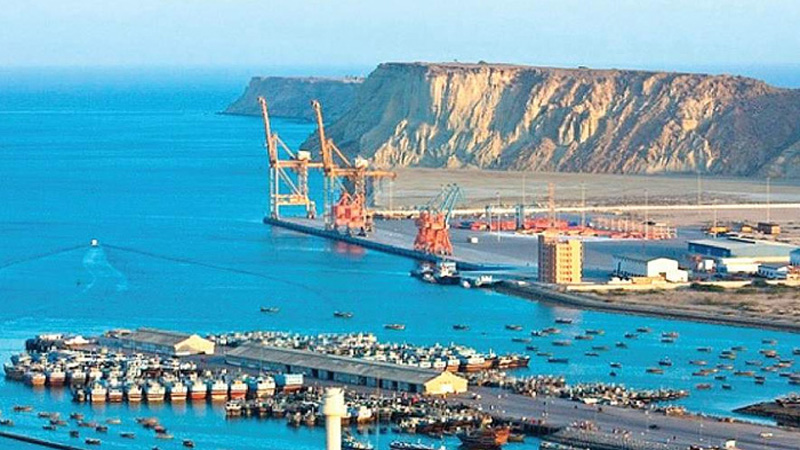 Saudi Arabia has expressed its keen interest in exploring more avenues for investment in Gwadar, as there is a huge potential for trade and economic activities.

Sanjrani said he considered the visit of Saudi Crown Prince Mohammad bin Salman as highly important, as it would help in laying the foundation for a new era of cooperation.

He said that Saudi investment had helped in rejuvenating the confidence of international community in Pakistan.

He said that during the visit of the crown prince, MoUs envisaging Saudi investment worth $20 billion were signed, which proved that Saudi Arabia considered Pakistan an important country. He further said that the recent high level reciprocal visits would usher into a new era of economic cooperation. He called for developing an institutional mechanism and legal framework for better institutional collaboration. Sanjrani also praised vision 2030 unveiled by Saudi Arabia and hoped that the initiative would help reduce unemployment and develop linkages with international markets, besides offering a win-win situation for all.

Both the leaders exchanged views on matters of mutual significance and bilateral importance.

Sanjrani said Pakistan and Saudi Arabia were intertwined into a relationship having its basis in religious, social, cultural and historical commonalities. He also appreciated the launch of Pakistan Saudi Arabia Supreme Coordination Council, hoping that the council would take tangible steps for promoting political, economic, social and cultural linkages. He welcomed the decision of increasing Hajj quota for Pakistanis and further reducing the visa fee, saying that these steps would further help promote people-to-people contact. The Senate chairman expressed his well wishes to King Salman bin Abdul Aziz and the Crown Prince Mohammad bin Salman.

The Saudi Shura Council chairman thanked Sanjrani and members of the Pakistani side for a warm welcome. He said Saudi Arabia accorded high importance to its relations with Pakistan. He said the bilateral relations were deep rooted in history and people of both the countries shared common aspirations. He said that mutual exchange of frequent delegations would further boost the linkages between the two countries. He agreed on enhancing institutional cooperation between the Senate and the Shura Council. The members of the visiting delegation, while talking on the occasion, said that Saudi Arabia was very keen to benefit from the economics prospects being offered by the future economic hub of the region and willing to invest in Gwadar.

The Senate chairman hoped that Saudi Arabia would explore investment opportunities in different areas. Cooperation in the defense sector also came under discussion and both sides looked forward to enhanced cooperation. The Saudi delegation also witnessed the Senate session.

Earlier, the delegation of Saudi Shura Council was on Thursday given a comprehensive briefing on CPEC by the Ministry of Planning, Development and Reforms and Ministry of Maritime Affairs at the Pakistan Institute of Parliamentary Services. The briefing consisted of an overall picture of the corridor as well as possible avenues of investment in the projects under the corridor for Saudi Arabia.

The delegation was informed that CPEC aimed to make Pakistan an economically sound and vivacious country and was the flagship project of the One Belt, One Road initiative. They were told that under the CPEC, projects work would be carried out in the energy, transport, infrastructure, industrial development, Gwadar Port development, socioeconomic development, trade and market access, agricultural research and development. The delegates were informed that the projects would provide much needed boost to Pakistan’s economy and would be an instrument for regional integration.

They were also told how Pakistan’s geographical position allowed it to provide a well-working connection with China, South Asia, Middle East and Central Asia. The viability of the project in terms of less time and distance as well as cost of business and transportation was also explained. Members of the Saudi delegation appreciated the work being carried out and expressed hope to increase cooperation not just though investment in the energy and infrastructure development sectors but also in social development.