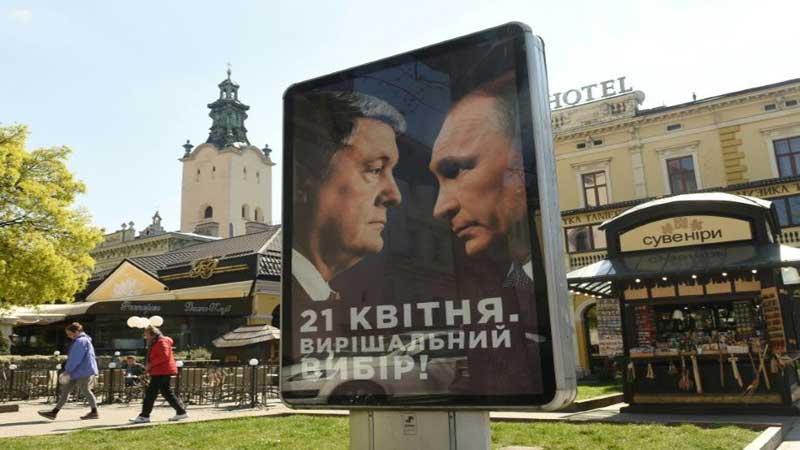 Facing a potentially huge defeat in a run-off vote on Sunday, Ukrainian President Petro Poroshenko is fighting to close the gap by winning votes in the country’s largely conservative Western regions and expanding his appeal elsewhere.

Up against Volodymyr Zelensky, a comedian with no previous political experience who topped the first round, Poroshenko believes he can come back by portraying himself as an experienced, pro-European patriot who is tough on Russia.

His use of patriotic slogans such as “army, language and faith” have appealed to national pride, resonating in particular with locals in western villages, where meagre salaries have forced thousands to look for work abroad.

“Life is hard,” said pensioner Ivan Mykytchyn in the village of Gnizdychiv, south of the western city of Lviv. “But we have to support Poroshenko.”

Despite a struggling economy, Mykytchyn said a majority of locals back Poroshenko for strengthening the army and standing up to Moscow, after it annexed Crimea and Kremlin-backed separatist fighters seized regions in Ukraine’s east.

Poroshenko’s prioritising of the use of the Ukrainian language over Russian and his support for creating an Orthodox church independent from Moscow were also reasons to extend his leadership, Mykytchyn said.

Planting potatoes in his garden to make up for his subsistence level pension, 88-year-old Olexy Danylyshin and his wife agreed. They receive around $200 from the state in total each month. “It’s only enough to buy the necessities,” he said, adding that he will vote for Poroshenko because he “revived the army and religion”.

Zelensky, who plays a fictitious president in a TV show, has sensationally emerged as the favourite to win the presidency.

He has taken advantage of frustration over Poroshenko’s perceived failure to implement tangible reforms, a stalling economy and rampant corruption.

‘Ukraine will be ruined’

Poroshenko lost in all but two western regions in the first round so it would take a massive turnaround to win.

“If Zelensky is elected, Ukraine will be ruined,” said Gnizdychiv village chief Ivan Olyar, fearing what will happen if the untested actor wins the country’s highest office.

Local authorities are concerned by the increasing numbers of villagers leaving Ukraine, mostly for neighbouring Poland.

Warsaw estimates that around 900,000 Ukrainians work in Poland. Several hundred thousand more are believed to be working in the country illegally.

“Abroad, they earn at least 500 euros a month. Here it’s between 200 and 250,” said Ivan Olyar, the head of a commune of five villages, including Gnizdychiv.

Yet the exodus of young people and economic hardships have not stopped locals from seeing some positives in Poroshenko’s leadership.