The Special Senate Committee met with the top leadership of the Pashtun Tahaffuz Movement (PTM) on Tuesday to discuss the issues faced by the Pashtun community.

While addressing the meeting he said that Jirga culture was the most important part of Pashtun society which paves a way forward for dialogues to resolve the issues.

“We all belong to a same country and there are always some grievances from the government but we have to resolve it through mutual dialogues,“ he added.

He assured the PTM leadership that the government will try to address their reservations on many issues and a formal committee has been formulated by the Senate in order to address the issues and concerns of the PTM.

The chief of the PTM, Manzoor Pashteen, briefed the committee about their reservations and asked for a legal commission on a number of issues including the recovery of abducted people andthe removal of land mines.

He further said that their demands were legal and clear and it must be resolved.

On the other hand the members of committee owed for taking this dialogue process forward and termed the demands of PTM as legal and constitutional asked for the resolution and fulfillment of these issues and demands. 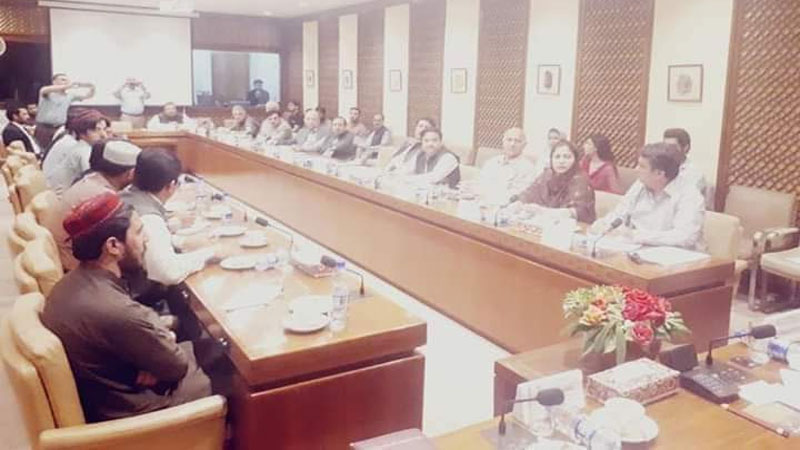 The three-hour-long meeting has been greatly admired by people from all walks of life.

Senator Mushahid Hussain described the meeting as “candid and cordial”, after Manzoor Pashteen gave a detailed presentation of developments in FATA.

Journalist Hamid Mir tweeted: “Good to see the PTM leadership in the Parliament House Islamabad with representative of different political parties standing under the portrait of Quaid-e-Azam Muhammad Ali Jinnah.”

In an exclusive interview with Daily Times, Hamid Wazir, a founding member of the PTM, said: “If the government is serious about our reservations then this is a positive step by the government to invite the PTM leadership for dialogues.”

He added that it was a kind of victory for them that the government has now at least acknowledged their demands as legal and constitutional.