* Let me take you to this giant five storey wooden haveli of Chiniot today, which is an early 20th-Century building 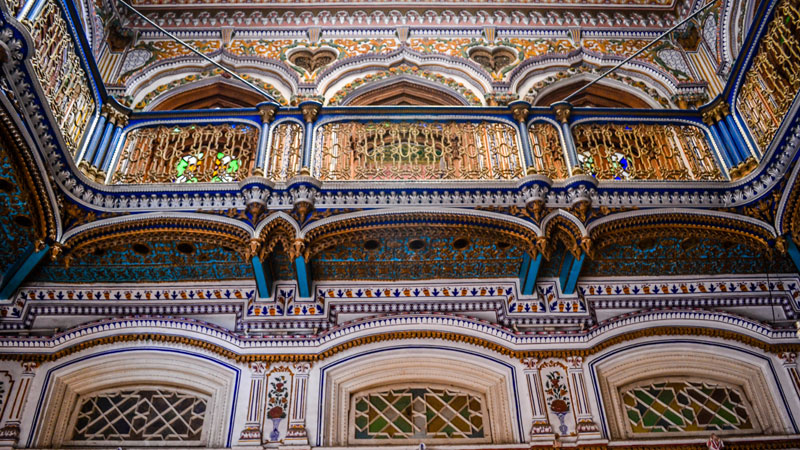 These days, I see a lot of mind blowing pictures of a beautiful wooden mansion in Chiniot on social media and it is the Omar Hayat Mahal or Gulzar Manzil.

Many of you must also have had come across these beautiful images but have you ever gone into the past of this magnificent mansion or haveli?

Let me take you to this giant five storey wooden haveli of Chiniot today, which is an early 20th-Century building. It is said that the construction of the mansion began in 1923 and was completed by 1935. This splendid mansion was built by Sheikh Omar Hayat – a businessman of Chiniot.

According to historic references about Omar Hayat, we get to know that he was a member of the Vohra Sheikh clan, and had migrated from Chiniot to Calcutta in the late 19th Century after being disowned by his family for marrying against their will

In Calcutta he was able to make good fortune for himself and had attained repute. At the time, Calcutta was a major trade hub of the Indian subcontinent, where a large number of Chinioti Sheikhs had settled down in the early decades of the 20th century.

In the year 1920 Sheikh Omar’s first son Gulzar was born and this brought him back to his hometown and then he decided to construct a grand and extraordinary palace that would feature the best of Chiniot’s craftsmanship, which was wood work. He wanted a house that was unrivalled in attractiveness and opulence and he was successful in that… but did this mansion bring good luck to him?

We find from the history that Syed Hassan Shah, who was a confidant of Sheikh, was deputed to construct this haveli and gathered artisans from Chiniot and other places to build this mind-blowing haveli. Thus the haveli was constructed in good ten years and if you visit it you will understand why it took so long. The haveli reflects the work of the best artisans of the region and trust me, until today I have not seen such a mesmerising and intricate work in any haveli.

It’s quoted in historic references that two masters in manabat kari or wood carving named Rahim Bakhsh Pirjha and Elahi Bakhsh Pirjha were involved in the work of this mansion and the brickwork was done by Ahmad Din, while the renowned artist Niaz Ahmad Jalandari did the stucco-work. You will be amazed to see the fresco of the haveli which was done by a well known artist Jan Muhammad. All these artists are known for their work in history and imagine how much would have been spent on the embellishments of this precious haveli which is a wonder of Chiniot. 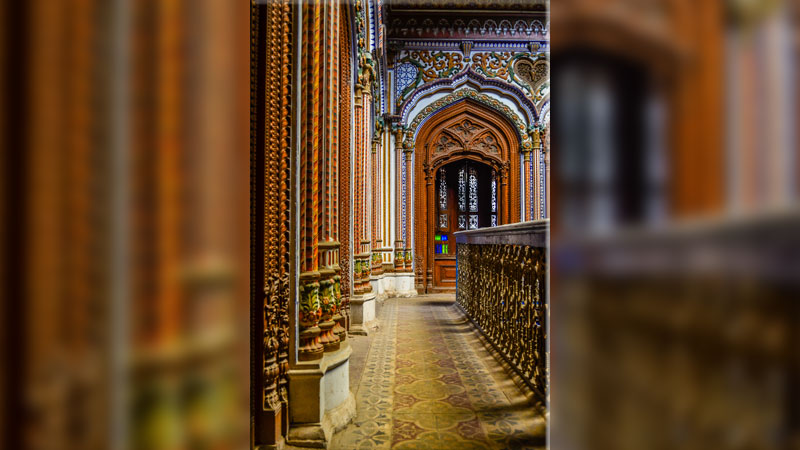 With an amount of Rs 200,000 the mansion was completed in 1935. The astounding exterior of the mansion had flabbergasted the people of Chiniot at that time and all were wondered that how a building of bricks and mortar could be turned into a gem or an ornament. Very soon the mansion became prominent for its distinctive appearance and façade.

The mansion had to being a ill fate to the Sheikh family and unfortunately Omar Hayat could not enjoy the pleasure of living in the grand mansion and died soon after the completion of this haveli in the same year.

Somehow this mansion did not suit the family at all. It is said that Gulzar, the son of Omar Hayat, was married in this haveli in 1937. Huge and lavish ceremonies were held at the haveli for the marriage celebrations and the entire town witnessed the opulence of the family. But who knew what had to happen the next morning of the marriage? Gulzar was found dead in a room and locals or the witness of that time narrate that it was due to inhaling poisonous material which was in the air because of burning excessive coal. Thus Gulzar was buried in the courtyard of the ground floor of the palace and later when his mother passed away, as she could not overcome the trauma of losing a 17 year old son, she was also buried next to him. So this haveli also houses the graves! The mansion was abandoned by the family after couple of years thinking it a bad omen. 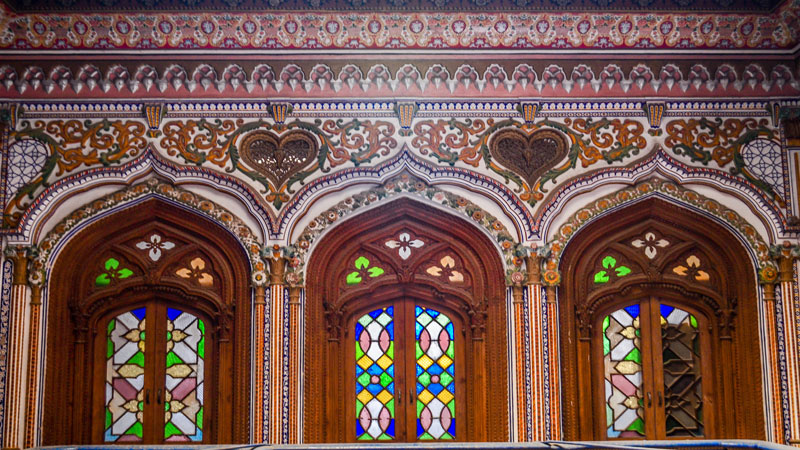 In 1940, the Anjuman-e-Islamia organisation opened a school in the building and in 1948 an orphanage was established but it was also shifted in 1950, leaving the building abandoned once again.

In 1960s, the structure was destroyed by looters and local wanderers who almost shattered the haveli. That was not the end to the atrocities made to the mansion. The people of Chiniot also played in their part and began dismantling doors, windows, fresco plaques and the marble slabs which were transported to Peshawar, Islamabad, Lahore and Karachi and were sold there.

What happened next to the mansion was more dreadful. Two levels of the mansion were dismantled in the 1970s as they had dilapidated with the passage of time and another level had to be abandoned following severe rains in 1993.

Architects say that this haveli is among the last remains of Mughal architectural style of construction. You will still see exceptional carving cuts on the doors of this mansion. The windows and jharokas reflect a colour of their past glory. The detailing and insignia used in the haveli are miraculously astonishing and would grab your attention.  The roofs, balconies, stairways, terrace and the stucco designs in the interior are also phenomenal. The facade of the building is festooned with a fine inlay of bricks, the stunning shine of marble and picturesque tinge places it among the great palaces of Mughal era influential. 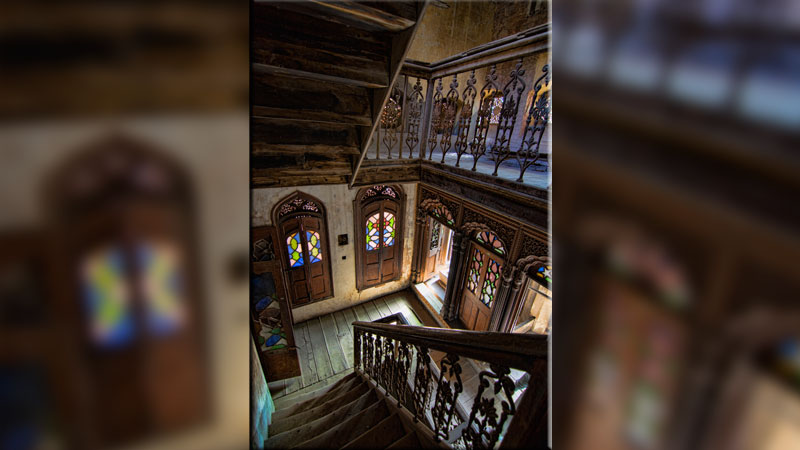 Until many years the family didn’t claim the ownership of this mansion, may be they thought it a bad luck for them and thus it was occupied by Qabza mafia who destroyed it. The haveli was taken over by the government in 1989 by the then deputy commissioner of Jhang M Athar Tahir and the encroachments were also removed. Muhammad Amjad Saqib, Chiniot’s assistant commissioner, lead a fundraising effort for the mansion’s repair and started its restoration with an expenditure of Rs 1700,000. Some portions were repaired by the mid-1990s but the quality of restoration works was not of a good standard.

The Omar Hayat Mahal is a symbol of this exemplary craftsmanship. I think the government should once again take up an initiative to set up a cultural centre in this place and a guided tour of the mansion should also be conducted. I guess the plan failed in the past as there was not much awareness on culture and heritage but now with an increase in tourism activities and focus of the present government on tourism, this mansion should also be utilised to its best.