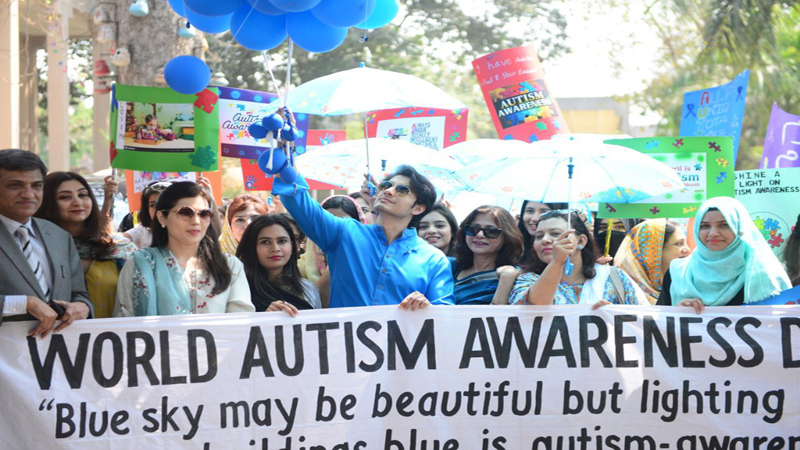 Eminent singer, actor and writer Ali Zafar said that persons suffering from autism are the real heroes and superstars.

“They have talent to see and analyze things from a different and unique perspective. They can be exceptionally good with music, arts and computers. We must all try to remove stigma associated with disabilities”, said Ali Zafar while talking to media at an awareness walk organized by the Autism Spectrum Disorder (ASD) Welfare Trust in connection with the twelfth World Autism Awareness Day celebrated throughout the world with a message to speak out against discrimination and celebrate the diversity of global community.

Ali Zafar along with ASD Welfare Trust Chairperson Ms Rukhsana Shah led the walk which was started from Children’s Library Complex and ended at the Governor’s House, The Mall. A large number of students, teachers, parents and doctors participated in the walk to raise awareness about the disorder.

Addressing the participants of the walk, Ali Zafar said “We must spread awareness to help support and understand the special needs of those diagnosed with autism. They must be provided with appropriate education and the means to thrive and reach their highest potential”.

The singer said that they needed to create an inclusive society in Pakistan where physical barriers were eliminated and persons with disabilities were included in every sphere of social, economic and political activities.

ASD Welfare Trust Chairperson Ms Rukhsana Shah highlighted the lack of awareness about autism in their society, saying that a recent survey in in a leading college in Lahore revealed that almost no students studying at the college had even heard of autism. “Similar have been the results of such surveys in other academic institutions in the country. Yet autism is the fastest-growing neurological disorder in the world, with one out of 60 children being diagnosed with this condition last year. In Pakistan, very little is known about autism and other neurological disorders even among medical professionals,” she added.

Rukhsana Shah also said that the autistic children, just characterized by difficulties in social interaction, verbal and nonverbal communication and repetitive behaviors, could have superb abilities of music, machines etc. “It’s just we need to explore their potentials,” she added. She laid a stress on developing more support, awareness, understanding and improved standards of education for these lovely angels.

Senior Clinical Psychologist of ASD Welfare Trust Ms. Farah Amanat said that there was no medicine in the word to cure autism; the life of people suffering from this discorded could only be improved by training, love and care. She elaborated that the symptoms of the disease included difficulty in mixing with other children, insistence on sameness, resistance to changes in routine, inappropriate laughing and giggling, no fear of dangers, little or no eye contact, sustained odd play, apparent insensitivity to pain, echolalia (repeating words or phrases in place of normal language), remaining alone, spinning objects, non-responsive to verbal cues and acting as deaf.