Think twice before any aggression: FM to Modi 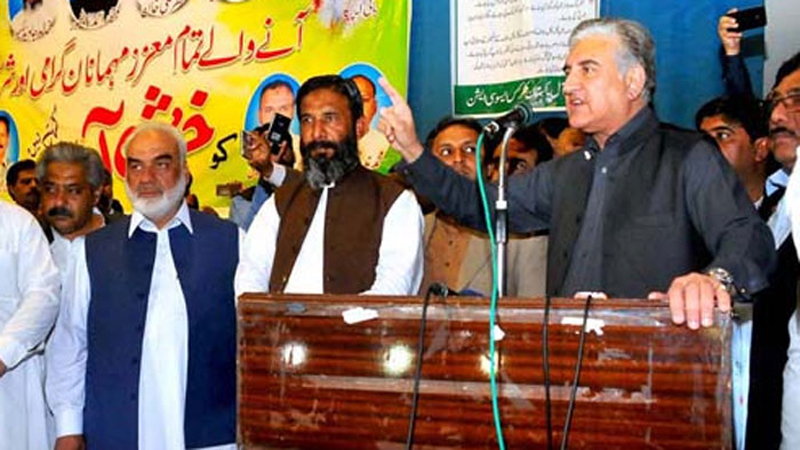 Foreign Minister Shah Mehmood Qureshi Saturday said that Islamabad will respond in a befitting manner if the enemy casts an evil eye on Pakistan.

“I categorically tell (Indian Prime Minister Narendra) Modi to think twice before any aggression, as it is the Naya Pakistan and the enthusiasm of people is very high … the country is more secure and safe than in the past,” Qureshi said at a ceremony organised by the All Pakistan Clerks Association (APCA) here at the Multan Arts Council.

“It is my responsibility to sensitise the people that conspiracies are being hatched against the homeland. The whole world acknowledges that there is a brave leadership in Pakistan now,” he said. “Nations have to pay the price when they move forward with dignity and courage. Conspiracies are being hatched to put Pakistan in the grey list. The enemies will try to weaken our economy. However, our forces are alert to foil any aggressive moves of the enemy,” he added.

The minister appreciated the unity among people against any foreign aggression. He said that he, along with Prime Minister Imran Khan, visited Chachro in Sindh, located near the Indian border, to give a clear message to the enemy that Pakistan is ready for both the options: peace or war.

Qureshi said March 23 will be observed with national zeal and zest. He said Pakistan Tehreek-e-Insaf (PTI) government will not disappoint the masses.

The foreign minister strongly condemned terrorist incident in New Zealand and termed it a global phenomenon. He said security should be provided to mosques as it is being provided to churches, temples and other worship places. “Unfortunately, there is Islamophobia in Europe and some malicious elements are entertaining their intentions and influencing internal politics. Migration and immigration is considered as big issue in Europe,” he said. “The tragic incident of New Zealand is the murder of humanity,” he said, adding that New Zealand has always been a peaceful country.

About Kartarpur Corridor project, the minister said a Pakistani delegation visited Attari recently to finalise terms and conditions for opening of the border at Kartarpur. It was for the first time after suspension of dialogue process between Pakistan and India that the two countries issued a joint statement, he said, and termed it a good development leading towards improvement in the bilaterasl relations.

Prime Minister Imran Khan’s gesture of release of Indian pilot has been appreciated by the people with mature thinking even in India, he said, and also lauded the role of different countries in de-escalation of tensions between Pakistan and India.