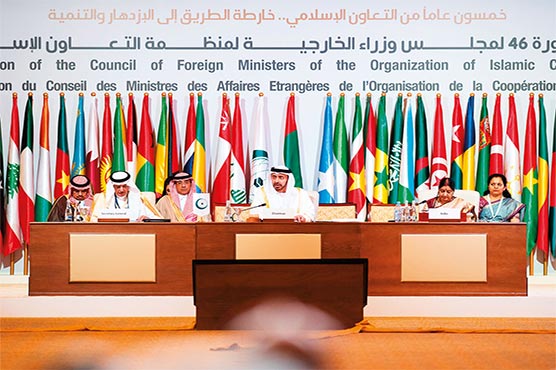 In a resolution adopted by the 46th session of the Council of Foreign Ministers (CFM), the OIC member states reiterated that Jammu and Kashmir remains the core dispute between Pakistan and India and its resolution is indispensable for the dream for peace in South Asia.

“The OIC resolution also condemned in the strongest terms recent wave of Indian terrorism in Occupied Jammu and Kashmir and reaffirmed its unwavering support for the Kashmiri people in their just cause.,” said a press release from the Foreign Office.

The resolution also reminded the international community of its obligation to ensure implementation of UN Security Council resolutions on the Jammu and Kashmir dispute, it said.

OIC expressed concern over Indian violation of Pakistani airspace, backing Pakistan’s right to defend itself against unprovoked acts of aggression.

In a new resolution sponsored by Pakistan, OIC member states urged India to refrain from the threat or use of force.

“The resolution called for restraint and de-escalation as well as the need to resolve outstanding issues through peaceful means,” said a press release from Pakistan’s Foreign Office.