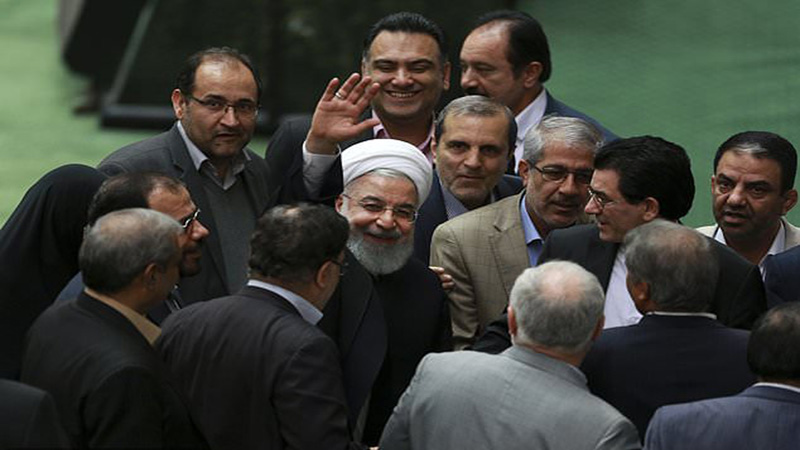 As Iran marked the 40th anniversary of its Islamic Revolution, a white-turbaned Shiite cleric at one commemoration targeted President Hassan Rouhani, a fellow clergyman, with this sign: “You who are the cause of inflation; we hope you won’t last until spring.”

Already lashed by criticism over his collapsing nuclear deal and renewed tensions with the U.S., the relatively moderate Rouhani faces anger from clerics, hard-line forces and an ever-growing disaffected public that now threatens his position.

Iranian presidents typically see their popularity erode during their second four-year terms, but analysts say Rouhani is particularly vulnerable because of the economic crisis assailing the country’s rial currency, which has hurt ordinary Iranians and emboldened critics to openly call for his ouster.

Though such a move only has happened once in the Islamic Republic’s four-decade history, the popular discontent heard on streets throughout Iran now could make it possible.

“I don’t care who is in the presidential palace: a cleric, a general or anybody else,” said Qassim Abhari, who sells hats and socks on the streets of Tehran. “We need someone who creates jobs and firmly pushes the brake pedal on rising prices.”

It’s been a long fall for Rouhani, who secured the 2015 nuclear deal after two years in office and won the praise of Iranians, who flooded the streets to celebrate it. Under the deal, Iran limited its enrichment of uranium in exchange for the lifting of economic sanctions.

But the benefits of the deal never reached much of the Iranian public. Even before President Donald Trump pulled America from the accord in May, uncertainty over its future caused the rial to crater, fueling sporadic, nationwide protests.

Now the rial is dropping again, down to 133,000 to $1. It had been 32,000 to the dollar at the time of the deal. On social media, hard-liners share price lists showing food staples like beans, rice and tomato paste rising as much as 238 percent.

Hassan Abbasi, a retired general in Iran’s hard-line Revolutionary Guard, which answers to Supreme Leader Ayatollah Ali Khamenei, gave a speech after Karaj saying he believed people will spit on Rouhani, Larijani and Zarif in the streets over the nuclear deal after they leave office. He said they are “shivering” over the accord’s collapse.

Tension between hard-liners and more-moderate forces within Iran are nothing new. The Islamic Republic’s political structure muddles who wields power between paramilitary forces within the Guard and the country’s civilian government. Reformist President Mohammad Khatami faced similar pressures in his second term, which then gave way to hard-line populist President Mahmoud Ahmadinejad.

But Khatami didn’t face the same grinding economic pressure, or an American president like Donald Trump, whose administration has taken a maximalist approach toward pressuring Tehran. Analysts say that only further weakens Rouhani’s hand.

“You, Mr. President, have only 15 to 20 percent of the power” within Iran’s government, the pro-Rouhani daily newspaper Jomhouri Eslami said in a January editorial.