Army authorised to respond to any Indian misadventure 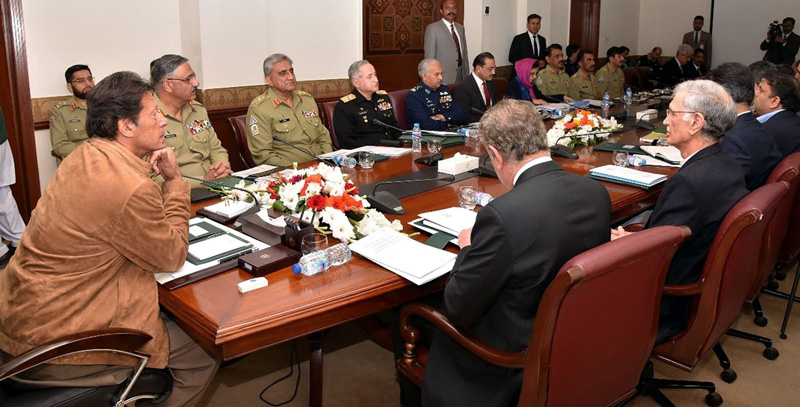 Prime Minister Imran Khan Thursday authorised the Armed Forces of Pakistan to respond ‘decisively’ and ‘comprehensively’ to any aggression or misadventure by India.

The prime minister chaired a meeting of the National Security Committee (NSC) held here at the PM Office. The participants of the meeting discussed geo-strategic and national security environment as well as the situation arising out of the Pulwama incident. “The forum noted that Pakistan is not involved in any way, means or form in the said incident. The incident was conceived, planned and executed indigenously,” a press release issued by the PM Office said.

The meeting said Pakistan has sincerely offered an investigation into the incident and a dialogue on the issue of terrorism as well as other disputed matters with India. “We expect New Delhi to positively respond to these offers,” the statement quoted the NSC as saying. The committee said based on the investigation following any tangible evidence provided by India, Pakistan will take action against anyone found using its soil for terrorist activities. “However, India also needs deep introspection to realize that why people of the occupied valley have lost fear of death. The violence by Indian forces in Held Kashmir is highly counterproductive,” the statement said.

The committee urged the global community to play its role in resolving the long-pending issue of Kashmir in accordance with the UN resolutions and aspirations of the Kashmiri people.

“This is Naya Pakistan … and we are determined to demonstrate to our people that the State is capable of protecting them … we believe that the monopoly of violence stays with the State only,” Prime Minister Imran Khan said while addressing the meeting. Expressing resolve to defend the motherland, he authorised the armed forces of Pakistan to respond decisively and comprehensively to any aggression or misadventure by India.

Regarding Pakistan’s resolve to fight the menace of terrorism, the prime minister said, “We recognise that terrorism and extremism are the top issues in the region and the whole region including Pakistan has suffered from it. Pakistan alone has endured over 70,000 casualties in the process, besides heavy financial losses to the national exchequer.” “That is why the National Action Plan (NAP) was conceived and issued in 2014, which outlined concrete and sequenced measures with consensus of all the political parties and institutions of Pakistan,” he added.

“We need to move to ensure that militancy and extremism are eliminated from the society and the State never becomes hostage to extremists,” the prime minister said, and directed both the interior ministry and the security institutions to immediately accelerate on-the-ground actions in this regard.

Meanwhile, a statement issued by the interior ministry said the federal government has imposed a ban on Jammat-ud-Dawa (JuD) and its humanitarian arm Falah-e-Insaniat Foundation (FIF).

The statement said the NSC in its meeting reviewed the NAP in detail and decided to accelerate action against the proscribed organisations. “It has been decided that Jamaat-ud-Dawa and Falah-e-Insaniat Foundation be notified as proscribed organisations,” the statement said. In February 2018, the then government of the Pakistan Muslim League-Nawaz (PML-N) had also banned the two organisations across Pakistan with their moveable and immovable assets frozen under the amended Anti-Terrorism Act, 1997. However, the Supreme Court in September 2018 had permitted them to continue their relief and charity work in the country.