IS defends final pocket of dying ‘caliphate’ in Syria 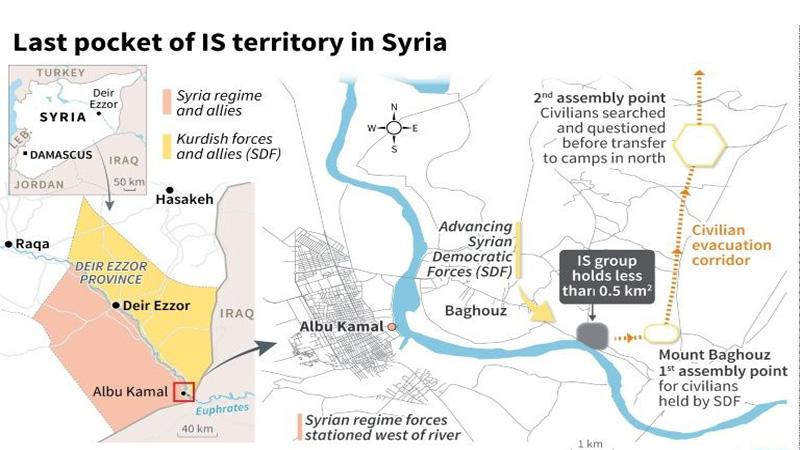 Islamic State group jihadists were defending the last pocket of their “caliphate” in Syria on Monday, as EU foreign ministers meet to discuss the crisis after US President Donald Trump called on European nations to take back their foreign fighters.

Diehard IS jihadists are trapped in their last patch of territory of less than half a square kilometre in eastern Syria near the Iraqi border.

They have prevented civilians from fleeing by blocking roads out of the village of Baghouz, the US-backed Syrian Democratic Forces (SDF) fighting them said on Sunday.

On a rooftop on the edges of the village, an SDF fighter told AFP that the frequencies used by the jihadists to communicate had gone dead.

“Now their area of control is really squeezed and they don’t have as many walkie talkies. They’re not talking to each other as much,” he added.

SDF spokesman Mustefa Bali said IS had blocked roads out of its holdout, preventing up to 2,000 civilians from escaping.

“Daesh has sealed off all the streets,” he said, using the Arabic acronym for IS.

Civilians who have been able to escape reported that IS militants were using women and children “as human shields,” said Sean Ryan, a spokesman for the US-led coalition.

Thousands of people have streamed out of the so-called “Baghouz pocket” in recent weeks, but at a collection point for new arrivals on Sunday, dozens of tents and a few trucks sat empty. “It’s been two days since anyone came out,” an SDF fighter told AFP.

On Monday, EU foreign ministers will meet in Brussels to discuss the war-torn country, after appeals for a “European solution” to the hundreds of foreigners — including from Britain, France, Germany, Ireland, Canada and Italy — who have been arrested by the SDF for allegedly fighting with IS.

Kurdish-led group has repeatedly called on European governments to take back their citizens, but they have been so far reluctant.

The issue has taken on greater urgency, however, amid fears of a security vacuum since Trump’s shock announcement in December that US troops would withdraw.

“The United States is asking Britain, France, Germany and other European allies to take back over 800 ISIS fighters that we captured in Syria and put them on trial,” Trump said in a tweet, using another acronym for IS.

Otherwise, “we will be forced to release them. The US does not want to watch as these ISIS fighters permeate Europe, which is where they are expected to go.” Trump’s tweet prompted a reaction from Paris, Brussels and Berlin.

In Syria, “it is the Kurds who hold them (the French jihadists) and we have every confidence in their ability to keep them detained,” French junior interior minister Laurent Nunez said.

If they return, “they will all be tried, and incarcerated,” he said, after France this month opened the door to bringing back its citizens.

A French source said an estimated 150 French nationals, including 90 children, could be brought back, but authorities have not confirmed any transfer.

‘No one will protect you’

Beyond Baghouz, IS retains a presence in Syria’s vast Badia desert, and has claimed deadly attacks in SDF-held territory.

“Over the past month, more than one foreign sleeper cell was arrested in multiple areas in Syria,” spokesman Bali said.

Any withdrawal would leave Syria’s Kurds exposed to a long-threatened attack by neighbouring Turkey, which views Kurdish fighters as “terrorists”.

They have scrambled to seek a new ally in Damascus after spending most of Syria’s conflict working towards self-rule.

Eight years into the conflict that has killed more than 360,000 people, President Bashar al-Assad’s government controls nearly two-thirds of the country.

Assad on Sunday warned the Kurds that the US would not protect them against Turkey. “No one will protect you except your state,” he said. Published in Daily Times, February 19th  2019.