‘Bhai Bhai’ — the plot is smooth with no loopholes 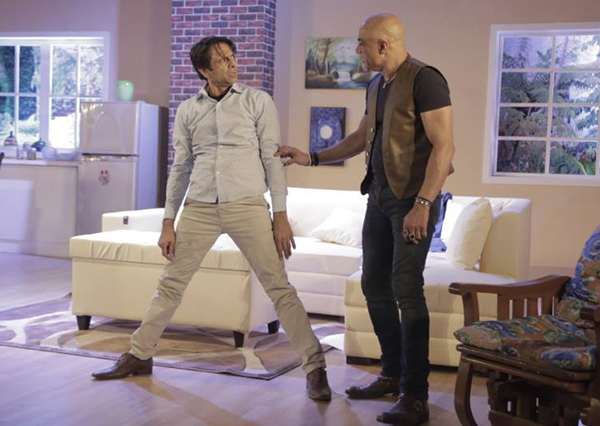 Sam Shepard’s iconic comedy ‘True West’ came to life at the Karachi Arts Council when the versatile Pakistani-American Hollywood actor Faran Tahir, directed and acted in the play with his brother Ali Tahir and Bulbulay’s Hina Dilpazir. The stage play titled “Bhai Bhai” featured only four actors with Faran Tahir and Ali Tahir becoming a continuous part of the play that lasted for two hours. The dialogues were developed by keeping in mind the audience, for each word seemed to be placed in it after thoughtful reflection. The plot of the play was smooth with no loopholes. At some parts of the play, the characters used the back story to explain the current situation, which worked like a charm. Immaculately translated by Faran and Ali, the play did have some dragging moments but they were necessary to build up for the next scene. While Ali’s dialogue delivery was suave, Faran on the other hand, showed his powerhouse vocals when delivering dialogues especially when arguing with his brother. At some points, his high pitch voice reverberated across the arena and at other moments, his voice was calm and smooth. Faran, who has played significant roles in Hollywood productions such as ‘Iron Man’, ‘Escape Plan’, ‘Charlie Wilson’s War’ and ‘Elysium’, has also played Shakespeare’s “Othello” which was a crucially acclaimed performance.

“Bhai Bhai” is about Ali who plays Boney, a sophisticated, mature, screenwriter trying to make a big name for himself and earn revenue by selling his scripts on Netflix. Faran, who plays Buddy, is street smart, often steals that he refers to as borrowing and has his own way of dealing with life’s problems that contradicts with Boney’s philosophy of life. “Bhai Bhai” effectively relates to the audience for the play has been translated by adding elements of our society but not dwelling too much on the trivialities of life but focusing on aspects that retain the value of the play. Each of the play’s scenes began abruptly but that was the essence of the play. The dialogues added pieces to the puzzle leading to the climax of each scene and eventually to the ending that displayed the acting prowess of the two brothers.

Hina Dilpazir plays the mother of two brothers who makes her entry during the latter part of the play but immediately sends the audience into laughter frenzy with her witty one-liners. Also part of the play is a character, Zaigham or Ziggy, a producer who can help Boney’s script become part of Netflix but Buddy befriends him by narrating to him his story that is weird, to say the least. Ziggy’s roles are played by Waleed Zaidi and on some days played by Aamir Qureshi, son of Pakistan cinema’s legend Mustafa Qureshi. 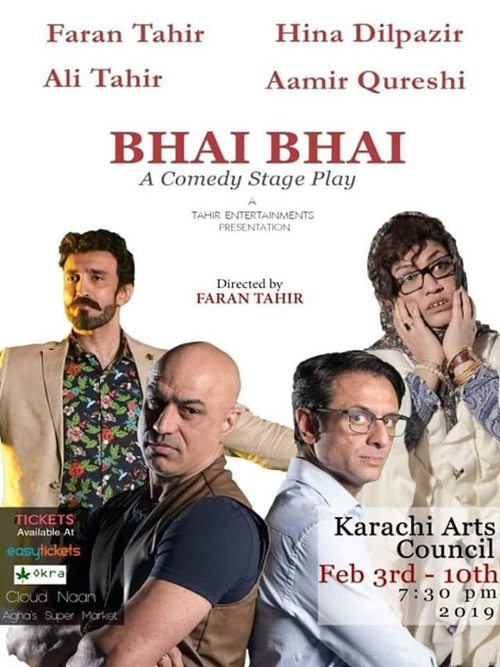 One of the most discussed and talked about aspect of this play is Netflix, an American media services provider for whom Boney is aspiring to write. Buddy, on the other hand, influences Ziggy to use his demented screenplay which ignites a tussle between Boney and Buddy. This aspect of the play focuses on how producers are enthusiastic to cash in the opportunity of their plays to for Netflix – a trend now growing rapidly in the television industry.

Faran and Ali, with their impeccable theatrical acting and stage presence showed why they are fine actors and sons of Naeem Tahir, a theatre, film and TV actor and Yasmin Tahir, who was a prominent part of Radio Pakistan for over three decades. Faran and Ali are also maternal grandchildren of Syed Imtiaz Ali Taj – who wrote Anarkali on which the Indian spectacular Mughal-e-Azam is based on and Hijab Imtiaz Ali, who was a literary figure of her time and also the first woman pilot of the Indian subcontinent.

Pictures are taken from the Facebook page of ‘Bhai Bhai’.