The once glorified Sir Ganga Ram House now in shambles 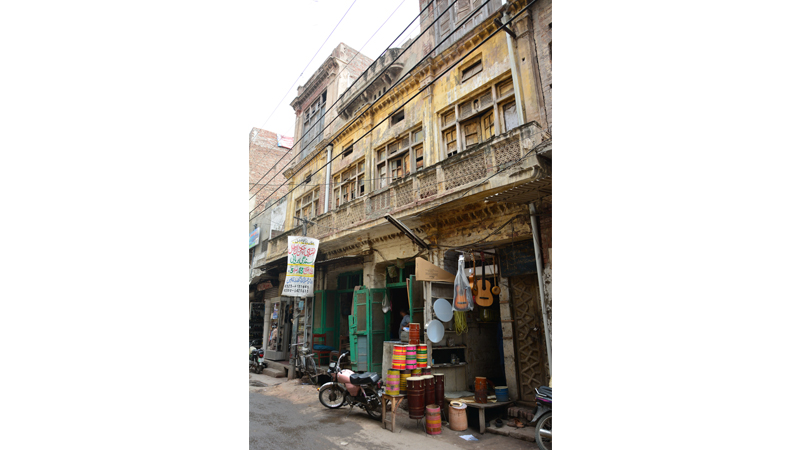 Being from Lahore, we all must be familiar with the Ganga Ram Hospital but have we ever thought of paying tribute to the man who built it for the welfare of the people? Lahore is a city loaded with history and culture and imprints of the great men of past in its streets and architecture. Sir Ganga Ram was such a man, who contributed immensely to the city’s development by changing it into one of the modern cities of the region. During his time Lahore saw a new approach towards architecture and attained a peak after several upheavals. Sir Ganga Ram devoted a major part of his life to Lahore as an engineer and a philanthropist. He supervised the construction of the majestic Lahore High Court and Cathedral and constructed the beautiful and stately Aitchison College. He also gave Lahore new water works in addition to many other buildings some of which have been lost. For twelve years he was the executive engineer of Lahore, a period which is known as “Ganga Ram period of Architecture”. 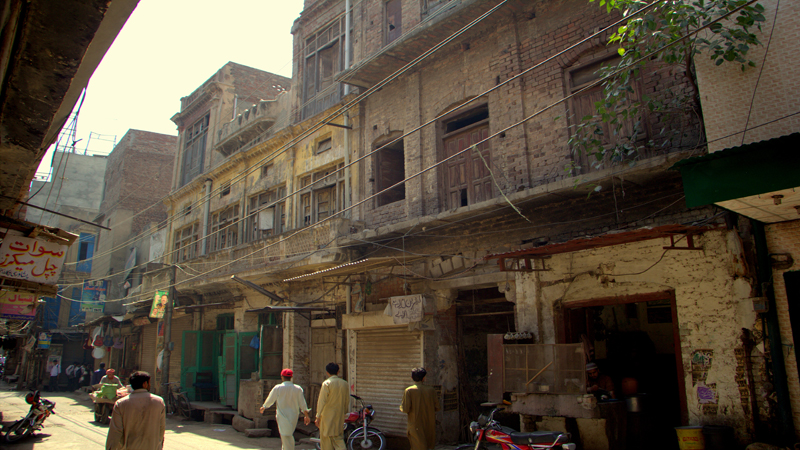 Sir Malcolm Hailey, a former governor of Punjab, writes about Sir Ganga Ram, “He won like a hero and gave like a saint”. Sir Ganga Ram services to Lahore cannot be forgotten as he gave a new look and feel to this historic city but unfortunately he has been forgotten by the people and history of Lahore. Once a statue of Sir Ganga Ram used to stand on the Mall Road. The famous Urdu writer, Saadat Hasan Manto writing about the rage and agitation of religious riots of 1947, said that the angry mobs after attacking a Hindu residential area moved to attack and damage the huge and heavy statue. They plundered the statue and pelted it with stones, smothered its face with coal tar and put a garland of old shoes around its neck and pulled it down. During the same time the police reached the location and opened fire on the mob. This caused injuries and the fellow with the garland of old shoes was also wounded. As he fell, the mob shouted: “Let’s rush him to Sir Ganga Ram Hospital”. I think the mob didn’t exactly know whose statue they were plundering or whose hospital they wanted to take the injured to. It’s shameful to imagine that the man who did so much for the people was not respected by our rigid minded mobs but wanted to be treated well in the hospital he made for them.

Sir Ganga Ram devoted a major part of his life to Lahore as an engineer and a philanthropist. He supervised the construction of the majestic Lahore High Court and Cathedral and constructed the beautiful and stately Aitchison College

Sir Ganga Ram cannot be separated from Lahore and its people. His hospital is serving the Lahoris and as a token of appreciation and respect we should keep his memories alive. His works, standing as symbols of peace are our pride. Now let me tell you another interesting fact about Sir Ganga Ram, do you know that his house is still intact and located inside the walled city? It is located near the Pakistan Talkies Cinema and you will be amazed by its beautiful architecture. Unfortunately the building has been abandoned and a board on it states, ‘not for sale or any other use.” The house itself is in a derelict condition and surrounded by music shops. The ground floor of the house is also a music instrument shop. I don’t know whether it is an encroachment or allotted to the owner of the shop. This is a yellow building which is no doubt a spectacle of architecture. 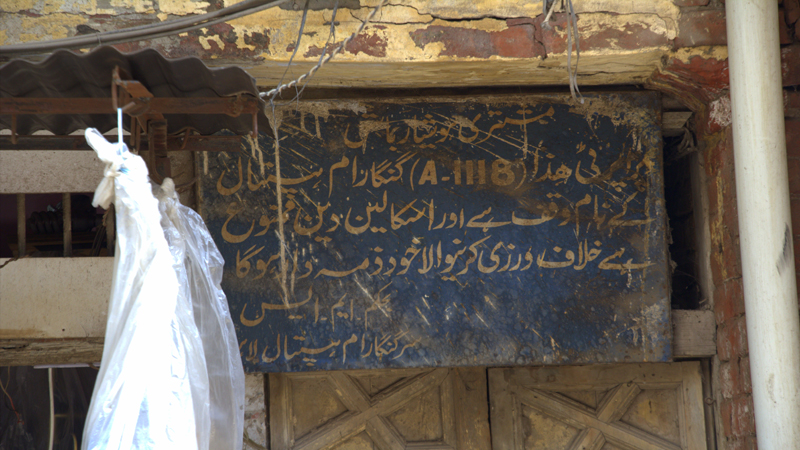 You will see the fine decoration and detailed motifs and carvings on the façade but overall the building is derelict and in need of restoration. I learnt that it has been locked since ages and no one can go inside the house. It should have been turned into a museum with the belongings, write ups and architectural drawings of Sir Ganga Ram. If it had been such a place, people would have been more familiar with Sir Ganga Ram and his services for Lahore. Many wonders you come across in Lahore and especially on Mall Road are the constructions of this intelligent and artistic architect, but how many of us know about him? It is also said that Sir Ganga Ram lived inside the Haveli Bej Nath which is near the Chitta Gate inside Delhi Gatte, Lahore. Let me give you a brief account of Sir Ganga Ram’s life. His complete name was Sir Ganga Ram Agrawal and he was born in 1851 in Mangtanwala, a village of Punjab in Pakistan. His father, Doulat Ram Agrawal was a junior sub inspector at a police station in Mangtanwala and sometime later he moved to Amritsar. Sir Ganga Ram passed his matriculation examination from the Government High School and joined the Government College, Lahore in 1869 and in 1871 he received a scholarship to the Thomason Civil Engineering College at Roorkee. He passed the final lower subordinate examination with the gold medal in 1873. 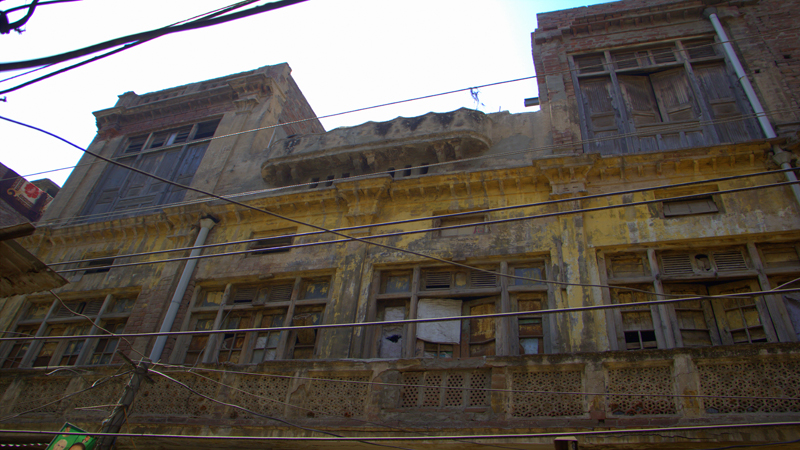 He was appointed assistant engineer and called to Delhi to help in the building of the Imperial Assemblage. In 1873, after a brief service in Punjab P.W.D (Punjab Public Works Department) he devoted himself to farming. He obtained 50,000 acres of barren land in Montgomery district on lease from the government and within three years he converted the vast desert into green fields, irrigated by water lifted by a hydroelectric plant and running through a thousand miles of irrigation channels, all constructed at his own cost. This was the biggest private enterprise of the kind, unknown and unthought-of in the country before. Sir Ganga Ram earned millions most of which he gave away to charity. He purchased thousands acres of barren land in Lyallpur (now Faisalabad) on lease and by using engineering skills and modern irrigation methods, turned the barren lands into fertile fields. In Lahore he designed and built General Post Office, Lahore Museum, Aitchison College, Mayo School of Arts (now the NCA), Ganga Ram Hospital, Lady Mclagan Girls High School, the chemistry department of the Government College University, the Albert Victor Wing of Mayo Hospital, the Hailey College of Commerce, Ravi Road House for the Disabled, the Ganga Ram Trust Building on the Mall Road and Lady Maynard Industrial School. He also constructed Model Town, once the best vicinity of Lahore, the powerhouse at Renala Khurd as well as the railway track between Pathankot and Amritsar. He built Sir Ganga Ram Hospital, Lady Mclagan School and Renala Khurd Power House with his own money. He retired in 1903. He died in London on July 10, 1927. His body was cremated and his ashes were brought back to India. A portion of the ashes were consigned to Ganga River and the rest buried in Lahore on the bank of River Ravi. His samadhi is still seen there but like his house in old Lahore, it is also a lost piece of history.