US may not stop policing the world

(E ditor’s note: During his first visit to US troops in Iraq since taking office, US President Donald Trump announced that the United States cannot continue to be the “policeman” of the world. What does Trump’s announcement on Wednesday mean for the Middle East and the regions beyond? Three experts share their views with China Daily’s Liu Jianna. Excerpts follow)

From ‘policeman’ to ‘police commander’

Trump has tried to fulfill his presidential campaign promises to cut spending on overseas security and defended his decision to withdraw US troops from Syria. Despite the opposition within the White House and the Pentagon and the outcry from US allies, Trump has managed to have his way. Which is well illustrated in the North Atlantic Treaty Organization members’ unprecedented increase in defense spending under US pressure. 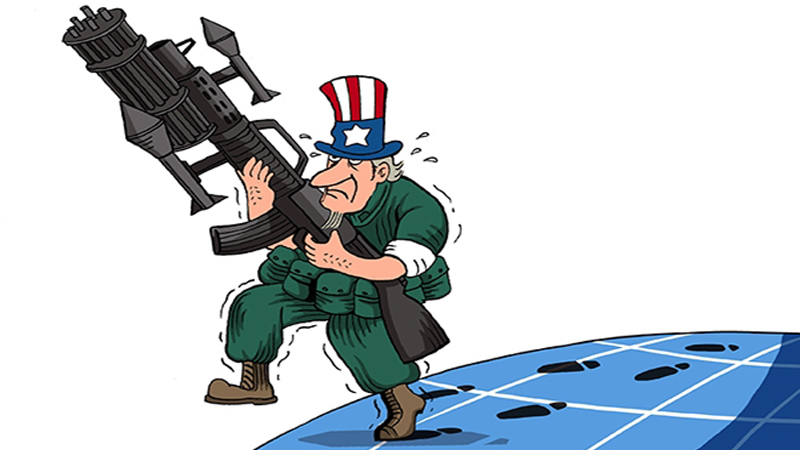 Yet considering the extremely complicated political situation in the US, the prospects for withdrawing 2,000 American troops from Syria in a short period seem dim.

More important, it should not be taken for granted that Trump’s announcement will necessarily lead to a decline in Washington’s global influence. If one reads between the lines, Trump’s statement means the US hopes to become the “police commander”, rather than remain the “policeman”.

Washington’s interests are spread across the world, so is its influence. The only difference is that the superpower may now demand others to provide the resources and do the chores for it. For instance, the US has attempted to sway the developments in the Middle East through its allies including Israel, Saudi Arabia and Turkey, instead of using its usual hands-on approach in order to avoid getting its hands dirty and wasting its own resources.

Feng Yujun, vice-dean of the Institute of International Studies and director of the Center for Russian and Central Asian Studies, Fudan University

Given Washington’s tendency to fine-tune its Middle East policies since the George W. Bush administration, Trump’s constant bemoaning of the US overseas commitment and the somewhat jarring statement that the US can no longer be the world’s “policeman” should not come as a complete surprise. His predecessors have also attempted to extricate the US from the Middle East quagmire, only that Trump comes across as way more blunt and persistent.

However, the US not policing the world does not mean it would forgo the stewardship in world affairs and hotspot issues. Instead, the US is now expected to invest its resources in, and focus attention on, affairs that are deemed more important to its own strategic interests. Compared with the moral responsibility his predecessors often highlighted, Trump is more focused on practical interests and returns due to his businessman-approach to the presidency.

Yet whether Trump will be able to decisively shift Washington’s overall strategy remains doubtful, because his decision to withdraw US troops from Syria has already triggered a strong backlash from within his administration as well as traditional US allies. That he had promised to pull out troops from Syria immediately after taking office but managed to do so only after almost two years shows he might have faced more resistance than many would believe.

In fact, the effect Trump’s statement and moves could have on the Middle East situation may be limited, because the US strategic fall-back in the region has been in the works for quite a while, and the region’s major players have been adjusting their own policies and strategies accordingly. Yet the competition and power play between the region’s heavyweights such as Iran, Saudi Arabia and Turkey may become fiercer in a US-less Middle East.

In the long run, however, the fine-tuning of Washington’s Middle East policy would be conducive to establishing a multipolar world and promoting peace and development, though it may cause some uncertainties in the short term.

Li Weijian, a senior research fellow at the Center for West Asian and African Studies and Institute for Foreign Policy Studies, Shanghai Institutes for International Studies

Trump’s recent moves and declarations show he is taking his “America First” policy to the extreme irrespective of US allies’ grave concerns and objections. Apart from the turmoil it may trigger in the White House, the US stopping policing the world risks leaving its allies in the lurch. The reason: the US has the responsibility to coordinate and jointly act with allies under the US “alliance system”, which formed the basis of its global leadership.

The “America First” policy championed by Trump has already made US allies suspicious of Washington’s credibility, which is expected to get even shakier with Trump’s latest jaw-dropping announcement.

As a matter of fact, adjustments to the US global political and security agendas have been made more frequently than before since Trump came to power. For instance, the US’ so-called Indo-Pacific strategy has been made one of East Asia’s major security issues. But given what Trump has announced, countries need to adjust their security strategies, as no replacement to the US seems to be in sight.