Mujeeb Alam — a singer with a soft voice 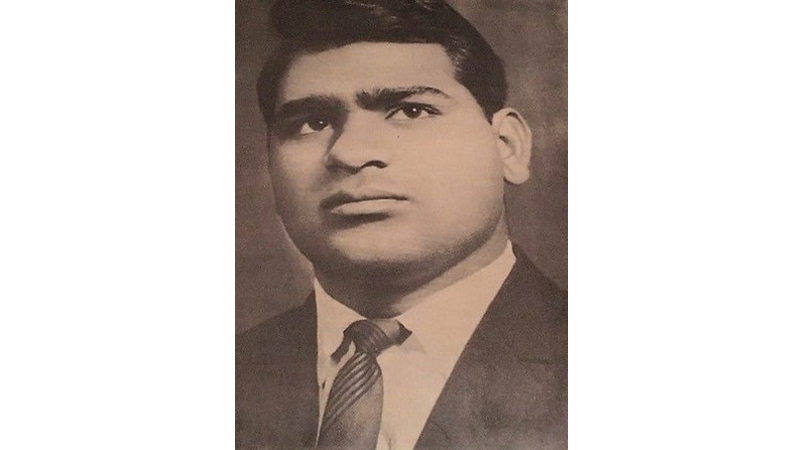 In the embryonic days (mid 1960s to end 1960s) of Pakistan Television Corporation (PTV), its Lahore Center was located at the hinder side of Radio Pakistan Building where presently Sales Section of Radio Pakistan is housed. There was not enough space for administration after making a recording hall and engineering panel. There was need to give space to some of the producers and administration staff. There was a need for rehearsal room for artists as the transmission used to go on air LIVE. So PTV hired a bungalow opposite Radio Pakistan premises. In front of the rehearsal room there was a large room where producers Kanwar Aftab Ahmad, Zahir Bhatti and Syed Rizi Tirmizi sat on their desks. This arrangement suited PTV authorities due to its proximity with the recording studios. It was here that once while I was seated in front of Kanwar Aftab Ahmad that a gentleman walked in and started talking about a new voice namely Mujeeb Alam. He said that he was the singer’s secretary. When he left, Kanwar Saheb observed that Mujeeb was following the style of Western media of using a secretary as a front man; quite modern approach in Pakistan showbiz at that time.

In 1966 when the above-mentioned episode took place, Mujeeb Alam’s fame had risen reasonably high due to the following melodious numbers and the ones he sang while working for films playback and PTV simultaneously;

This number was filmed on Muhammad Ali when he watches Zeba Begum sitting with Santosh Kumar with Saloni dancing on the song. I hadn’t realised that Saloni at that time danced so well. Music was composed by Khalil Ahmad. The song was from the movie ‘Lori’ released on November 14, 1966. Like millions that came under the spell of this song, I too became a victim of presence of the pathos in this composition. It was a tragic score but in a reasonably medium fast tempo with piano playing as its base. It was a Black & White film. From this song one can decipher that Mujeeb’s voice is soft and tone falling in-between Mehdi Hassan and Ahmad Rushdi; not meant for intricate murkis of Mehdi Hassan and not as bright and ticklish like Rushdi’s voice.

Film was ‘Dil Day Kei Daikho’. It was made in the heydays of actor Kamal in 1969. In this song by Mujeeb Alam, Deeba and Syed Kamal are on the screen, the latter playing Piano. Music was given by Sohail Rana. Support cast was Asad Jafri, Sabira and Lehri. Lyricist was Fayyaz Hashmi. Director was S.A. Hafiz and Producer was M. Anwar Sheikh.It is a catchy song.

1970 was lucky year for Mujeeb Alam as he was picked up by Nisar Bazmi to render a beautiful song mentioned above. This song is from film ‘Shama Aur Parwana’. This film was directed by Hasan Tariq and the song was penned by Saif udduin Saif, a very versatile lyricist and filmed on Nadeem.

This song which earned him real fame was for film Chakori in 1967. Mujeeb Alam won the Nigar Award for the song. Talat Afroze from Toronto comments that Akhtar Yousuf was an Urdu Songwriter who wrote all songs of the East Pakistani feature film “Chakori” released in 1967. The most notable songs penned by Akhtar Yousuf for Chakori include “Woh Mere Samne Tasveer Bane Baithe Hain” and “Kahaan Ho Tum Ko Dhoondh Rahi Hain”. Earlier, in 1966, Mirza Nazeer Baig Mughal was a struggling young singer based in Karachi, West Pakistan who had recorded a few songs with Firdausi Rahman (Firdausi Begum) in Karachi for the Pakistani film “Sehra” with Nisar Bazmi as the Music Composer. Unfortunately, that film was never released. Nazeer Baig then went to Dhaka and was given a chance to sing a song for the feature film ‘Chakori’ being produced at that time as well as act as the lead role in Chakori. He was given the Filmi name of “Nadeem.” The song Nazeer Baig alias Nadeem Baig recorded was “Kahaan Ho Tum Ko Dhoondh Rahi Hain” which was just okay singing wise but did not meet the high singing expectations of Music Director Robin Ghosh. So the other songs of Chakori were sung by Masood Rana and Mujeeb Alam (and by Basheer Ahmad for the Bangla version of the film Chakori which was released in Bangla language as well in 1967). Anyway, Nazeer Baig was billed as Nadeem Baig for the 1967 movie Chakori and his innocent looks and sensitive acting as well as Shabana’s acting and the beautiful songs written by Akhtar Yousuf and the fine melodies composed by Robin Ghosh made Chakori a block buster hit movie for the years 1967 and 1968 with 81 weeks of showing in Cinemas; platinum jubilee hit film all over East and West Pakistan and earned Nadeem Baig a Nigar Film Award! Nadeem could not become a successful playback singer but did achieve stardom with his acting in the lead role for the film Chakori!

It was a fantastic song from Nakhshab’s film ‘Jalwa’ with music by Nashad. It was a Muslim social film where Darpan sings for Shamim Ara sitting in the hall addressing Shamim Ara in balcony. Unfortunately the film did not do well on box office like Nakhshab’s earlier venture ‘Fanoos’ but this song made the day for Mujeeb Alam.

Mujeeb Alam got a very nice number to sing with Madam Nurjehan in Nisar Bazmi’s music for the film ‘Lakhon Main Aik’ in which both excelled.

It is another nice duet by Mujeeb Alam with Nurjehan filmed on Nadeem and Shabnam.

It is Masroor Anwar’s song composed by Suhail Rana for Parvez Malik’s directed film ‘Saughat’ starring Nadeem and Rozina. Despite being a melodious song it could not become popular because the film did not click at box office.

8It is a sad song in medium tempo sung both by Mujeeb Alam and Madam Nurjehan separately. It is penned by Masroor Anwar for music composer M. Ashraf or unreleased film ‘Anjaana’.

Mujeeb Alam was born on September 04, 1948 in Kanpur, Utter Pardesh, India in an Urdu speaking family. Later he got settled in Karachi, Pakistan. He could sing composed ghazal and geet with ease. His active singing years were from 1964 to 2004. He died on June 02, 2004 at the age of 55. His singing career can therefore be termed as short. A singer, who had sung dozens of songs when many other established singers were at their peak, started being ignored from mid 1970s onwards by film industry with the entry of new talent like Akhlaq Ahmad and A. Nayyarin Lollywood and Alamgir, Shehki and Nazia-Zuhaib appearing at Karachi TV.Ahmad Rushdi was already singing in Karachi and Lahore simultaneously. Salim Raza and Munir Hussain had gradually faded away due to entry of Mehdi Hassan. Mujeeb Alam used to be clad in suit. He was short in height and rather heavy in structure but was of very amiable countenance.He also sang songs in Bangla, Punjabi and Pushto languages, and has almost 12 audio albums to his credit. He also won a Nigar Award for a song about love for the mother, ‘Aye Maan Teri Soorat Kay Aagay’ in the film ‘Qulli’.According to one estimate he sang in 52 films and received a number of awards. Resonance in his voice attracted the audience. He also sang songs in Bangla, Punjabi and Pushto languages. He has almost 12 audio albums to his credit. His songs in Bangla were also acclaimed.