The art of submission

More than 50 richly-decorated manuscripts of the Holy Quran, spanning nearly a millennium are on display at the Quran Gallery, National Museum of Karachi 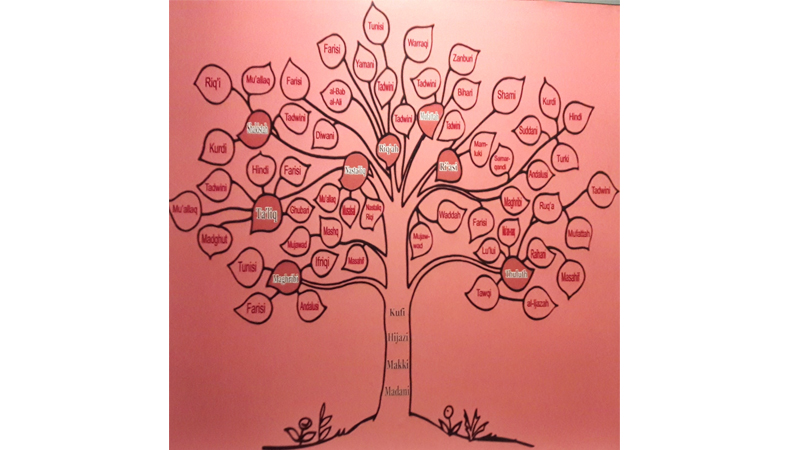 An exhibition titled, ‘Treasures of Islamic Arts’ in the National Museum of Karachi, at the Quran Gallery, includes more than 50 richly decorated manuscripts that span nearly a millennium, cover a vast area of the Islamic world and encompass an array of styles and formats, from simple sheets of parchment to large bound tomes.

The copies of the Holy Quran put on view are some of the finest existing examples from diverse historical eras. The gallery offers “an unparalleled view of some of the greatest Islamic calligraphy, illumination and binding.” There are manuscripts here of a standard that are not available in other collections in the world.

These manuscripts convey the sense of how artists from Arab to Samarqand, Bokhara, Bulkh, central Asia and Iran found different ways to honour the same sacred text of Islam. The handwritten copies of Islam’s holy text at the Quran Gallery is a glorious show, utterly, and like nothing I’ve ever seen, with more than 50 foliated and floriated manuscripts including embellished portions or complete Qurans and folios, some as small as pocket kits, others the size of regular 10-11 inches.

The copy that captured most of my attention is the extra ordinary decorated copy of the Holy Quran transcribed in Bahar script in the year 851 Hijri/1447AD. It was commissioned by Sharaqi Dynasty ruler Muzaffar Shah. The whole of the prayer carpet sized unparallel copy is transcribed in pure gold. It contains 1200 pages and 1000 marginal ornamentations. This is the largest copy of the holy book in the world as big as a prayer carpet.

For a moment I thought it was the talismanic prayer carpet weaved with the art of reverence and submission to the Almighty Allah that will transport us straight to the heavens. The copy gave me a sense of the depth of veneration these artists had for the unseen creator of the universe. Their creativity gives us a chance to know and learn their love— about a religion and a culture lived by, and treasured by a larger quarter of the world’s population. The beautiful medallions created by the artists of past have enhanced the magnificence of gold text while the burst of colours are meant to create a profound effect.

The Art of the Qur’an aims to introduce visitors to the Islamic holy book as both foundational sacred text, the divine message for Muslims, received by the Prophet Hazrat Mohammad (PBUH) between 610 and 632 – and the work of art.

These manuscripts convey the sense as to how artists from Arab to Samarqand, Bokhara, Bulkh, central Asia and Iran found different ways to honour the same sacred text of Islam

Due to the Islamic proscription on figurative images in religious contexts, the words of the Quran took on great visual importance, leading to the development of varied styles of calligraphy, as well as ornate decorative and binding techniques – particularly after the introduction of paper by the 11th century, which led to an “incredible burst of creativity”.

Splendours of Quran calligraphy and illumination reproduce the formal excellence of colors and texture that distinguish these artistic masterpieces. The Qur’an can never be illustrated, so it was through illumination, whether using gold and other colors, that you could decorate the holy text. Many of the manuscripts were really intended to amaze, whether by their size, their illuminations, calligraphy, choice of paper or choice of ink. The experience of these manuscripts was very important.

Within three centuries of its advent, Islam had produced architecture and a calligraphic art, including that of illumination that have seldom been equaled and never surpassed, the one centered on the Mosque and the other on the Qur’an.

Out of a more than 350 pieces, around 50 pieces are displayed. The manuscripts are selected as per their decoration, scripting and binding values. The display has been designed based on history and calligraphic style keeping in view the importance of the copiers’ skill. The display starts with ancient Kufic script portions of 1000 years old Quran while the second one is 900 year old. The third manuscript is a complete Quran written 800 years ago in the same Kufic script.

Next is a rare copy of Quran written in the script Rayhan. Script Rayhan came in vogue in the 7th century Hijra and faded out in the same century. Therefore manuscripts of Rayhan script are considered of great historical importance.

Similarly, there are 2 Qurans of 8th century Hijri written in Naskh. One is copied by 3rd great Islamic calligrapher Yaqut Mustasmi, who belonged to the court of Caliph Mustasim Billah. Another piece of the same period is written by famous Calligrapher of Abbasid period, Yaqut –Al-Musali. Super fine special effect has been given to the piece with the use of pure gold fluid to highlight the space between the lines while the shapes of hill are symmetrical and facing each other with a smooth consistency. The unique cover is shiny like contemporary lacquer paint technique. The special effect created in the piece is its delicate beautification. Spaces between the lines are decorated with pure gold fluid ink. (Hill shaped semi geometric designs are smooth and symmetrical facing each other. The dust jacket or book cover is shiny as today’s lacquer paint.

Kashmiri manuscripts are unique because of its artistry and decoration. It is as beautiful as the region itself. Floral and leafy motifs have been taken from the nature. Interesting feature of the manuscript is the use of expensive colours that were processed from precious and semi precious stones while pure gold fluid has been used to create the effect of gold. They created superfine paper that can be compared with silk fabric.

The 300 year old script of Tajalli Ali Shah is only one of its kinds because of its paper, decoration, binding and calligraphy. Tajalli Ali Shah was the finance minister of Hyderabad Deccan. He was a poet and a calligrapher of highest order. But his script is not available in India or anywhere in world. Therefore, it is absolutely unique and rare. Its illumination is also a magnificent with the extensive use of lapis lazuli motifs and gold designs.

In most of the scripts the text area is sprinkled with gold fluid, blue is lapis lazuli, red is marjan, sometimes cinnabar stone. Rarely used green colour is emerald or any semi-precious stone

The museum has some scripts that none of the museum in the world has. Its collection is unparallel. Costly colours were used on excellent quality paper. They have avoided use of vegetable or chemical colours that could damage the paper. But these papers are still intact and in good shape even better than modern pages even after passing of thousands of years. 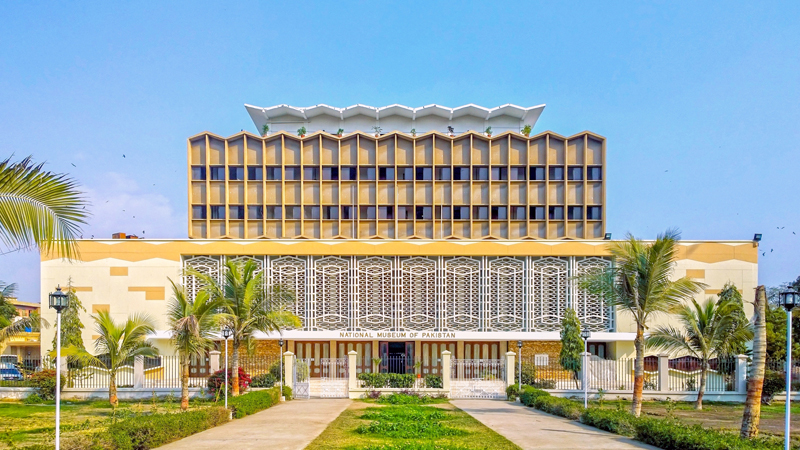 Calligraphy is the mother of Islamic fine arts. When Islam spread from Arab towards central Asia and Iran, worshipping the idol, stone or a picture was discouraged, the fine artists turned their focus to Quranic art of Kashmiri, Iranian, Persian, Indian and many other styles. They took the concept from the nature and environment and developed the unique style of Kufic script art. They kept on refining their skill, foliated and floriated the style so much that by the 3rd century Hijri there were 6 Kufic styles in vogue. These masterpieces manuscripts of the Quran are written in Angular “Kufic” and cursive “Naskh”, the early forms of script style used during the first century in Islamic architecture, in copies of the Quran and in textile and pottery, written in vertical strokes. The text has richly illuminated borders with geometric and floral designs.

Kufic style is named after Iraqi city of Kufa while Nashk has been designed for writing Arabic alphabets. It is widely used for copying purpose while these precious manuscripts are proposing an amazing artistry of Islamic calligraphy and early scripting style of nastaliq, a popular font still widely in use. Even in this current era outfitted with high-tech composing software is incomplete without the scripting style of nastaliq. Calligraphy is a writing style with an aesthetic approach. Islamic calligraphy in particular is a linear art involving one dimension only with simple designs and strict norms and rules of handling the subject matter which are as strict as the norms of religion. With the Quran considered a sacred text, calligraphy is highly venerated in Islam and Islamic art.

Quranic verses were compiled during the period of 2nd caliph Hazrat Abu Bakr Siddique (RA). In the 2nd century Hijra, when Islam started flourishing outside Arab, keeping in view the difficulties of reading Quran by the non Arabs, punctuation marks were introduced to the copies of the Quran. This gave the artists a new concept of decoration and illumination and they created different motifs, designs and medallions to create the punctuation marks. From then on, the art was refined with tremendous sophistication. Many Kufic styles evolved.

It means that Quranic art had started during 2nd century Hijri and attained its height by the 4th century Hijra. Script started from Kufic, in the second half of the 2nd century Hijri the artists developed the Naskh script. In old Arab, Naskh meant mansukh or abolished. But now Arabs use Naskh to mean writing, which is the reason that later scripts are called Naskh. Then script style Solus came for a brief period where words were a little larger than Naskh. It was a bold form of Naskh and was used in writing headings of Surah. Then came the script Taliq where strokes were long and cursive. From Taliq originated the script Nastaliq. Quran in script Nastaliq is very rare while this museum possess one 400 year old from Shahjahan’s period. It is full of gold patches.

One of the striking features of the Qurans of all periods is the decorative illumination that appears at the beginning of the manuscript, around chapter or sura header, and to mark the fifth and tenth verses within the chapters, consisting of leafy, floral and geometric motifs. Illuminated ornament also varied by period and region. Although gold decoration appears frequently in early dated manuscripts of the Quran, lapis lazuli blue was combined with gold by the later centuries. Some manuscripts of the Quran have gold sprinkled and inlaid behind the text. Great artistic skill has also been lavished on the bindings that enclose and protect Qurans.

Thousands of years ago people really had a love and passion for calligraphy. Whether Islamic or classic, these manuscripts are an extravagant bonanza of super fine handwriting of scribes who copied the masterpieces, illuminated and bounded those in a period when there was no technology evolved for machine composing, recharged them to their credit and left those to the flow of time thus conveying the history to the present time audience- best of my commendation to the calligraphic artists of the past.

The writer is a Karachi based multimedia journalist can be reached @tasneemshazia or shaziatasneemf@yahoo.com