Why India’s BJP wants to rekindle the Babri mosque dispute

Twenty-six years ago, Hindu nationalists destroyed the Babri Masjid in the northern city of Ayodhya in Uttar Pradesh state, sparking some of the bloodiest communal violence in India’s recent history, which killed some 2,000 people.

The perpetrators claimed Mughal Emperor Babur had erected the mosque in place of a “magnificent” Hindu temple dedicated to the Hindu god Ram in an attempt to “humiliate Hindus”. They argued the demolition of the Babri Masjid was not just “an act of revenge” but also a “religious duty“.

The mobs that demolished the mosque were mobilised by the parent body of the Bharatiya Janata Party (BJP), the Rashtriya Swayamsevak

Sangh (RSS), and aided by numerous Hindu nationalist groups, including the Vishwa Hindu Parishad (VHP) and Bajrang Dal. The man accused of leading the agitation was a cofounder of the BJP, Lal Krishna Advani.

At the time, the BJP used the demolition to increase its support base among India’s Hindu majority. Advani, who later served as home minister and deputy prime minister of India, is currently facing trial for conspiracy charges in the Babri mosque demolition case.

While Advani was the face of the BJP’s Ram temple campaign at the time, Narendra Modi, India’s current prime minister, was the backroom manager of this divisive enterprise. He later used the political capital he gained as result of the Hindu nationalist wave triggered by the Ayodhya agitation to propel himself into national politics and eventually to the premiership.

Today, he and his party are seeking to reignite the flames of the Ayodhya dispute, pushing the country towards a new period of unprecedented polarisation and conflict.

Modi and his leadership know that the demolition of the Babri mosque helped make Islamophobia acceptable and mainstream and an effective political tool. The helplessness or unwillingness of state institutions to stop the campaign which led to the mosque’s demolition and deliver justice to the victims of the subsequent bloodshed across India have resulted in the political marginalisation of Muslims and other minorities.

Even after the demolition of the mosque, the issue of the building of a Ram temple on its site remained unresolved. Then Prime Minister PV Narasimha Rao of the Congress party promised to rebuild the demolished mosque.  The BJP, while never agreeing to the potential rebuilding of the mosque, put the plans for constructing a Ram temple on its site on the back burner to allow the backlash it faced because of the demolition and the consequent communal riots to die down.

Meanwhile, a title lawsuit over the site of the mosque that has been ongoing since the 1950s was carried to the Supreme Court. All major political parties, including the BJP, eventually agreed to wait for the decision of the Supreme Court on this title case before taking any action regarding the faith of the demolished mosque.

For many years, the court case has been stuck in the Supreme Court, but something changed this year. Subramanian Swamy, a prominent BJP member, asked the court to expedite the matter.

There were several reasons behind the governing party’s new-found ambition to build a Ram temple in Ayodhya as quickly as possible.

The BJP feels the need to pressure the courts to make a decision as soon as possible because the nationwide support for the party is diminishing rapidly and an important national election is just around the corner.

Controversial economic decisions, like the demonetisation of high-value currency notes and the rollout of a Goods and Services Tax, combined with the ongoing discontent of the farmers and rising youth unemployment, caused the public’s trust in Modi to visibly erode in the last couple of years.

To counter this growing anti-incumbent sentiment and guarantee another general election victory in the national vote scheduled for April, the BJP and its parent body RSS focused their attention on the campaign to build a temple in Ayodhya – the issue that propelled them to power in the first place.

While campaigning for the December 11 regional assembly elections, they made sure the Ayodhya dispute is at the forefront of all discussions. On the campaign trail, Prime Minister Modi repeatedly accused the main opposition party Congress of terrorising the judiciary and preventing judges from reaching a pro-Hindu decision in the title case concerning the site of the Babri mosque. Amit Shah, the president of the BJP, vowed not to give even an inch on the issue, while leaders of the RSS and the BJP said that the court must give a judgement which respects Hindu sentiments. 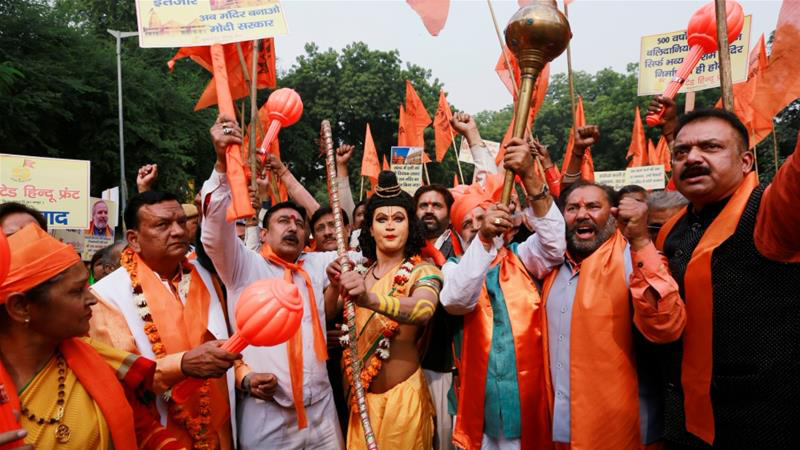 Despite all these efforts, the BJP lost power in three key states – Rajasthan, Chhattisgarh and Madhya Pradesh – in recent local elections. However, the party still managed to avoid a wipeout in Rajasthan and Madhya Pradesh, proving once again that their strategy of using Hindu nationalist agitations to counter the growing popular dissatisfaction with the government is working at least partially.

The building of a Ram temple in Ayodhya is an emotive issue for the Hindus, potent enough to make many of them to ignore their economic woes and rally around any party that espouses this cause. Most Hindus believe it is their religious duty to back the campaign and many believe that Muslims, as “the progeny of Babur”, have to be kept in their place – as subjugated people of India, living under the domination of Hindus. It is this feeling of dominance that the BJP seeks to stoke.

In this sense, its strategy to mobilise around the issue of building of a Ram temple in Ayodhya is likely to turn even more aggressive as the 2019 general elections near. The opponents of the party, and anyone who cares for the unity, prosperity and wellbeing of India, should now be more alert than ever before to the dangers posed by this toxic dispute.