Kartarpur: Reckless throw of the dice

Between 2008 and 2015, there was not a single Khalistani terrorism-related fatality in Punjab. Each year thereafter has seen multiple fatalities. At the same time, Pakistani mischief in Jammu and Kashmir has been consistently escalating since Kartarpur:2013. India’s overtures, including personal initiatives by Prime Minister Narendra Modi, such as the self invitation to the then Prime Minister Nawaz Sharif’s birthday in December 2016, have been obvious and abject failures.

Each of the terrorist incidents in Punjab over the past years, including two major Islamist terrorist attacks (Gurdaspur and Pathankot), link back to Pakistan. The decision on the Kartarpur Corridor was announced just days after the terrorist attack on the Nirankari Bhawan at Amritsar, in which three persons were killed. State agencies identified Harmeet Singh, aka ‘Phd’, as the ‘mastermind.

Harmeet Singh is known to be sheltered by the Inter Services Intelligence in Pakistan. He is only one of the many Khalistani terrorists who finds safe haven in Pakistan more than two and a half decades after the comprehensive defeat of terrorism in the Punjab. Prominent among those who continue to be hosted by the ISI, and periodically prodded into launching – or attempting to launch – terrorist attacks in Punjab, are Wadhawa Singh of the Babbar Khalsa International, Ranjeet Singh Neeta and Paramjit Singh Panjwar of the Khalistan Commando Force and Gajinder Singh of the Dal Khalsa. Moreover, the ISI’s support to Khalistani extremists in the Sikh diaspora across the world was very visible in the mobilisation for the “London Declaration” in support of the Khalistani “Referendum 2020” campaign at Trafalgar Square on August 12, 2018. Though the Trafalgar Square demonstration was a damp squib, the reality is that Pakistan continues to liberally fund, facilitate and support Khalistani groups across the world.

Crucially, barely four days after the Nirankari Bhawan attack, even as continuous terrorist activity and relentless breaches of the ceasefire along the Line of Control in J&K persisted, there was no evidence whatsoever that Pakistan’s intentions or strategy with regard to the use of terrorism as an instrument of strategic extension in the neighbourhood had altered. In particular, it is well known that Pakistan has long exploited the major Sikh shrines in its territory – including Kartarpur Sahib and Guru Nanak’s birthplace, Nankana Sahib – for attempts to radicalise pilgrims. Indeed, in April 2018, when a jatha (group) of 1,800 pilgrims visited Pakistan, accompanying Indian officials and diplomats were forcibly separated from the group in explicit violation of bilateral protocols. India subsequently lodged a strong diplomatic protest, alleging that the pilgrimage had been used to raise the issue of Khalistan, and that the pilgrims were exposed to inflammatory statements and materials at various shrines they visited.

What, then, was the motivation or compulsion – despite Modi’s repeated declamations that there could be no dialogue with Pakistan till Islamabad ended its support to terrorism in India – for the abrupt agreement on the Kartarpur Corridor? Indeed, what could have provoked the comparisons with the fall of the Berlin Wall and the even more absurd claim that “the corridor will become a symbol of love and peace between both countries”? 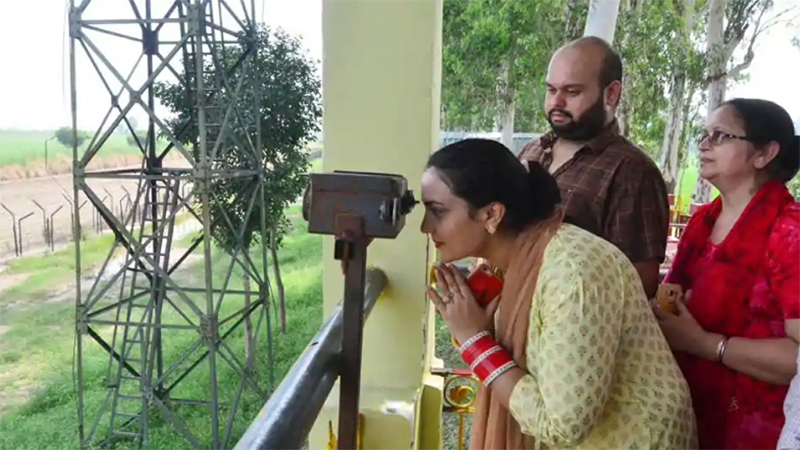 Simply put, there are no rational grounds, no dramatic shift in the security situation or the support of Pakistan’s state agencies to terrorist formations targeting India, no conducive atmosphere, which could justify the abrupt fast forwarding of the long pending Kartarpur Corridor project. On the Indian side, the only visible compulsion is the proximity of the general elections in 2019, and the ruling Bharatiya Janata Party’s electoral interests – its bid to woo the conservative Sikh voter in the state. In all other aspects, Modi’s and the BJP’s postures and statements have remained consistently hostile to Pakistan and to any reopening of the peace process. Subsequent statements by Minister of Foreign Affairs Sushma Swaraj have reiterated that “a dialogue cannot start only with the Kartarpur corridor”. On the Pakistan side, this initiative represents an opportunity for further mischief, a continuation of its project to keep the Khalistani movement alive and use Sikh shrines and pilgrimages as opportunities for radicalisation and recruitment.

The ruling dispensation at South Block has displayed, in the decision on the Kartarpur Corridor and, indeed, in its broad approach to terrorism and its Pakistan policy, a disconnect with reality and neglect of facts. The regime has repeatedly sacrificed the national interest to a short term, partisan electoral calculus, and there is not a single reason to believe that this is not the case with regard to the decision on the Kartarpur Corridor.