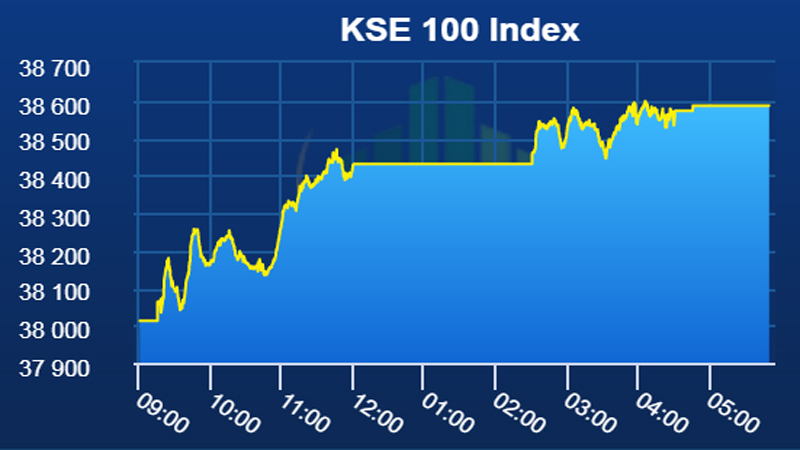 KARACHI: The KSE100 index remained under pressure initially post State Bank of Pakistan (SBP) chief’s statement that foreign exchange reserves would deplete further if the dollar exchange rate against Pakistani Rupee was not jacked up.

However, the news that Pakistan has got another USD 1 billion from Saudi Arabia under support package along with value hunting led by attractive valuation triggered positive sentiment. Pakistan also expects to get third tranche from Saudi Arabia next month.

The index gained 574.03 points to close at 38,585.66 points level. However, the trading volume remained dull with a turnover of just 99 million shares against five days average volume of 127 million shares.

An analyst Trust Securities said the last day of the week, unlike the whole week showed some positive movements where market mostly stayed in the green zone. Some hopes restored as the Asian Development Bank (ADB) will provide more than seven billion dollars in loan financing and grants to Pakistan over the next three years for energy and transport infrastructure uplifts as well as domestic resources mobilization while the lender has also extended its current Country Operation Business Plan (COBP) to 2019-21 with programme of $7.5 billion.

Macro indicators were also hard to track as on the back of strong demand, the dollar gained sharply versus the rupee, hitting the high level at Rs 140 in the open market in process of trading activity.

Average daily traded value stood at $34 million, slightly up 17 percent and volume stood at 99 million, up 17 percent as well. Furthermore, major contribution to total market volume came from BOP (+1.3%), LOTCHEM (+2.6%) and PAEL (+1.6%). An equity analyst Danish Ladhani expects market to remain volatile on the back of economic and political uncertainty.