The deep, disturbing thought behind lynchings 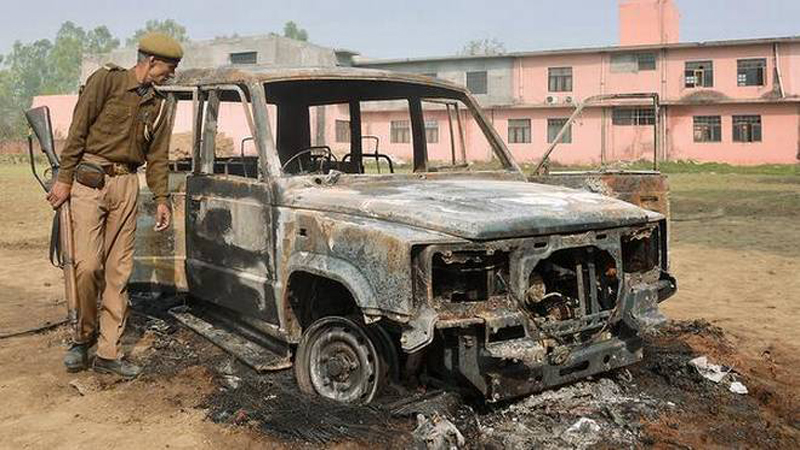 Group violence unleashed upon an alleged transgressor is always spurred by a complex interplay of interest, prejudice and power. The Bulandshahr lynchings of a police officer and a youth were not spontaneous reactions to grave wrongdoing by a hastily assembled crowd.

Let me selectively offer one such explanation for this frightening incident, one that emphasises power. Extreme aggression creates fear in one’s opponents as well as in those who refuse to take sides. If so, the Bulandshahr lynchings were intended not only to terrorise a minority – the alleged cow-slaughterers – but also those keen to impartially implement the law. The killing of the brave Station House Officer, Subodh Kumar Singh, was meant to instil fear in officers within the state machinery itself. This is a plausible account. But I want to go beyond it and examine the ideological underpinnings of lynching. Since mob lynching is not restricted to any one ideology, I wish to go beneath the surface of ideologies to identify the elementary structure of thought present invariably at their core. What is it? Here is my tentative answer: marked difference between ‘us’ and ‘them’. But even this, stated so simplistically, is an insufficient explanation for lynching. Why?

Consider the following: suppose that you and I are different in one respect, say religion, but not in others. This difference usually implies that you participate in a practice different from mine – I go to a temple and you to a church. But it does not follow that you and I, despite our religious differences, cannot come together in other respects. After all, those who go to the church or to the temple also speak a language, are citizens of a polity, are part of a family, live in a neighbourhood, have jobs and hobbies, and relate to people around on many other issues. In short, our membership of a religious community is only one among many memberships of several different communities. Invariably, a person has multiple networks or solidarities. So, if Christians are asked whether it is important for Hindus in their midst to go to church, they can easily respond by saying: “No, that is exclusive to us and not required for them. They go to the temple.” Quite clearly, this ‘us’ and ‘them’ discourse is quite harmless. The distinction in this form cannot be the ideological cause of violence against others.

But now, let us imagine that this religious dimension begins to colour all other dimensions of life. And therefore, religion becomes our dominant or defining feature. Let us say that everyone believes that despite their common activities, they are primarily defined by their religion. Such people will draw sharp boundaries between their own communities and that of others. They will view themselves as utterly different from each other. Such differences might even lead to conflicts. Can such people live together? I believe they can, because despite conflicts, they will invariably find some commonality. Life needs social cooperation; it would come to a standstill if people focussed only on their radical differences rather than on what brings them together. Besides, conflicts need not turn violent. Therefore, on its own, even a sharp boundary between ‘us’ and ‘them’ (sharpened religious differences) does not cause lynching that necessarily involves violence.

So, what else is required? The missing component in this way of thinking is not just the simple idea of ‘them’ and ‘us’, but a more complex belief with two components. First, that only our group matters: only we are worthy, good, right, or true, and all others are unworthy, evil, wrong, or false; they are wholly insignificant, or hold views that are completely false. Second, while those who are like us are our brothers or intimate friends, those not like us are so inferior, so wrong, such a menace that they can’t stay with us. It is impossible to converse or dialogue with them, or, if agreement or consensus has broken down, to reach out to them. They are enemies, constituting a permanent existential threat, to be expelled or exterminated. It is this strong sense of one’s own intrinsic superiority and the others’ unmitigated inferiority, accompanied by the view that these others can’t be lived with, that lies at the root of such exclusionary violence. If a group or any section thereof partakes in this way of thinking, then, the entire society is clearly heading for disaster.

The consequences of this deep and radical otherness are not only catastrophic for the targeted community but eventually for the community of violent offenders itself. This is because those who see others as enemies invariably get sucked into a vortex of suspicion towards members of their own community. It is not long before they start looking for the enemy within – those members of their own intimate community who are seen to deviate from the true or virtuous path set by powerful ideologues in the community. Anyone who sympathises with others is seen as a betrayer, as deviant and abnormal, and one who tries to be neutral or impartial as no longer one of us, a traitor. All such transgressors must be quickly brought in line. And since modes of persuasion disappear from such exclusivist communities, the deviant within who strays from doctrinal truth or has the temerity to refuse complete loyalty or allegiance must also be violently excluded.

Behind lynching then lies the vicious idea that moral truth or goodness is possessed by one group alone and all others who do not have it or stray from it are enemies to be fought, conquered or decimated.