A unique and engaging political perspective 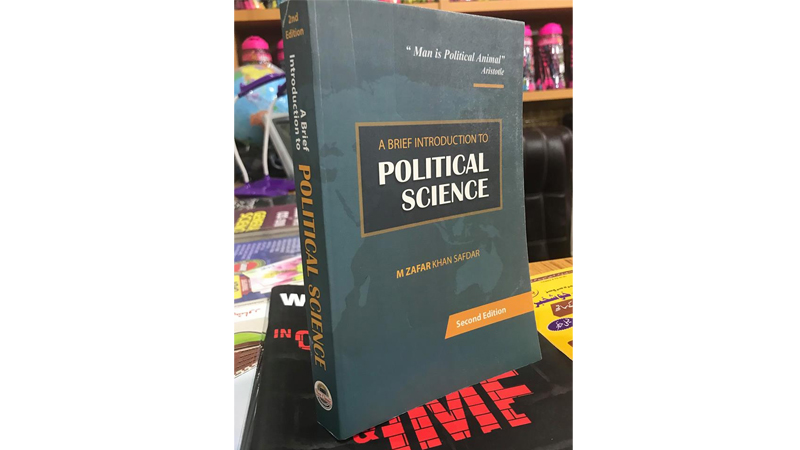 The second edition of the book, ‘A brief introduction to Political Science’, uses diverse real-world examples to show readers the relevance of government and state in our daily lives. This book is written from a unique and engaging political perspective and provides clear explanations, practical applications, and current examples that can help develop readers ’interest in the discipline of political science. The book seems to be the first of its kind written in the 21st century. Most of the books on political science were written sometime in the second half of the 20th century. This was the period of cold war that had divided the world into western, socialist and non-aligned blocks. That period has its own language, dictions, phrases, jargons etc. The demise of the Union of Soviet Socialist Republics (USSR) ushered in the new era of globalisation. This naturally changed the whole scenario, which necessitated a modern approach to the subject of political science and I feel this reason prompted the author to this book.

In the first chapter M Zafar Khan Safdar gives a succinct account of the evaluation of political science as an academic discipline. This nuance historical perspective enriches readers not only with political science but also with philosophy. This excellently written chapter introduces readers to political philosophers such as Socratic, Plato Aristotle and encompasses enlightenment political thinkers i.e. Thomas Hobbes, John Lock, Rousseau, John Stuart Mill. It further explains how the 21st century political thinkers have built contemporary political science on the ideas and concepts of classical political thinkers. The chapter illustrates how various research methods can be used in the discipline of political science. This familiarises the students with various methodological steps and procedures that may help them in their higher studies. In the pursuit of a more adequate understanding of the social world, Dr Khan has very scholastically explained political science relationship with other social sciences such as sociology, history, anthropology. The author here recognises that an overall understanding of the social world is possible by getting familiar with the subject matter, similarities and differences among various social sciences and the ways each approach and explain the social world.

Chapter two is intended to explain state (political entity in international law, commonly referred to as a country). Unlike conventional and traditional approaches, Khan has given very up-to-dated definitions of the state (i.e., state is group/community of persons more less numerous, permanently occupying a defined territory, having a government of their own to which a great body of citizens render their obedience, and enjoy freedom from external control and threats). He explains how Pakistan is a state fitting into this definition. He explained elements of the state (population, territory, government and sovereignty) with examples. He illustrates state to develop an account of the state that is prominent in past and present political theories. He has given detailed account of the theories that explain the origin of state. These theoretical explanations encompass various theories (i.e. Theory of Divine Origin, Theory of Force, Theories of Social Contract, Patriarchal theory, Matriarchal Theory, Evolutionary/ Historical theory etc). The chapter further spotlights the relationship between state and society. It explains the relationship between political regimes and social movement emergence and success. It also explains the strengths and weaknesses in state and society relationship. The entire discussion is theoretically informed taking into account Machiavelli, Ibn-Khaldun, Al-Mawardi and Al-Ghazali, Thomas Hobbes, John Locke and Jean Jacques Rousseau. After discussing various political thinkers, the author argues the state should not be viewed as a form of association that subsumes or subordinates all others.

Chapter three focuses on ‘individual in political community’. It explains law as a body of norms, customs and written rules that regulate the behaviour of individuals and organization. The author gives a succinct account of the philosophy and various sources of law. It further illustrates the types and kinds of laws both international and national. It give special consideration to Islamic Law , sources of Islamic Law, morality, Liberty, Equality, Rights and Duties in secular state, Rights and duties of individual under Islamic state/ Sharia. The discussion in this chapter enables the readers to understand that law is a pervasive feature of social life that profoundly affects us. It can be argued that the chapter explains that the law shapes our lives from our condition of birth to our condition of death and everything else in between. Reading the chapter equips the readers to see to see how law and rule of law make seek our obedience to state.

Chapter four addresses various forms of government. It starts with traditional classification of government (starting from Plato and Aristotle) to modern classifications. The chapter explains how do the various types of government-democracy, totalitarianism, authoritarianism/ dictatorship, confederation, federation and confederation–a difference, parliamentary form of government, monarchy, oligarchy-differ? The author has very skillfully explained that political systems display marked variety throughout the human history as well as around the world today. The comparison of various types of governments equips students with the analytical skills to be informed democratic citizens.

Chapter five revolves around the structure and role of the government. The chapter starts with theory of separation of powers with special emphasis on Montesquieu’s theory of Separation of Powers. It focuses on legislature: law making, structure of legislature, Unicameral Legislature (bnicameralism), Bicameral Legislature (bicameralism) deciding between Unicameral and Bicameral, executive: law enforcing, judiciary: law adjudicating and rule of law. The chapter provides an informed analysis of the concept of power in its traditional meaning-the ability to achieve the desired ends despite resistance from others- to its contemporary meaning knowledge as power which exists with everyone and in all social relations. It provides a nuance explanation of law, power and rule of law.

Chapter six is about political process and dynamics. The chapter highlights the types and importance of election in any state, especially democratic process. It further spotlights the “The Suffrage” its historical roots, suffrage through ages, common methods of suffrage, and types. However, it could have been excellent here if the author gave due consideration to the women suffrage movement. The author has given a very scholarly touch to the discussion of political parties, functions of political parties, channels of party communication, types of political parties and the importance of two or more than two parties for a real democratic government. The author has explained the role of pressure groups and its role in political processes. The chapter gives a very enlightening explanation of public opinion with an assertion that it is important in a democracy because the people are the ultimate source of political power.

Chapter seven illustrates political and economic ideologies and systems that rule the world. This chapter introduces the students of political science, sociology, anthropology, history, psychology with key concepts and ideas such as Individualism, Anarchism, Capitalism, Socialism, Marxism, Communism, and Imperialism. This chapter addresses the needs of all disciplines and engages not only the academicians but common people as most of us know and talk something about these ideologies and system as teachers, students, business people, lawyers, psychologists and common citizens of society. This chapter enables the readers to understand and use these concepts with precision and clear grasp of their meaning in their academic as well as their day today conversation.

In the final chapter Dr Zafar Khan has attempted to familiarise the readers with the historical origin, structure and gaols of various international and national organisation. In sum, this book constitutes in my opinion the best textbook for the undergraduate students of political science, sociology and other social sciences. Each chapter is clear, thorough and well formatted with key reference and explanations of terms and concepts. I hope the teaching community and the educated segment of our society will welcome this new addition.