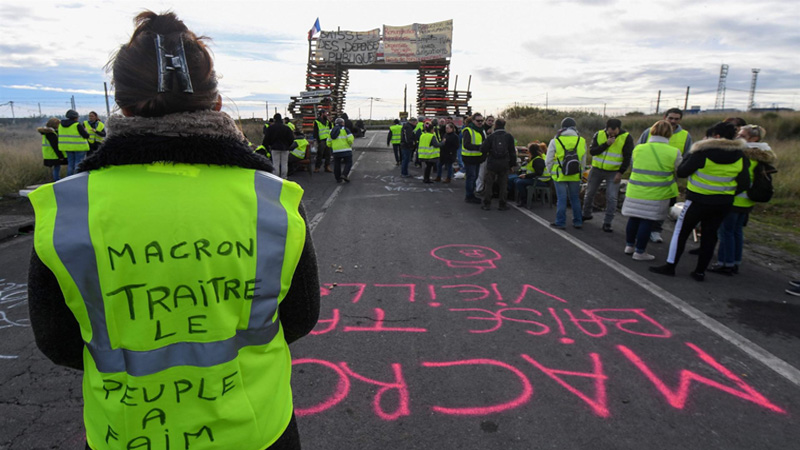 French Prime Minister Edouard Philippe is to announce on Dec. 4 a suspension of fuel tax increases planned for Jan. 1 in a move to end violent “yellow vest” protests against the measure, government sources said Dec. 4.

The suspension will be accompanied by other measures aimed at calming two weeks of nationwide demonstrations by the protesters, the sources said.

French leader Emmanuel Macron has faced growing pressure to find a way out of the deepest crisis of his presidency after protests over taxes sparked Paris’s worst rioting in decades.

As dozens of people were brought to court over Saturday’s clashes, Prime Minister Edouard Philippe met with ministers and with the heads of the main opposition parties to discuss ways of resolving the tension.

A meeting was planned on Tuesday with moderate members of the movement, which has waged two weeks of nationwide demonstrations over fuel tax and the rising cost of living.

But on Monday, “yellow vest” representatives who had extended a hand of dialogue after the Paris riots said they had decided against attending the talks with Philippe for “security reasons”.

Jacline Mouraud and Benjamin Cauchy, two of the leaders of the protests, told AFP they had received threats from hardline protesters who warned them against entering into negotiations with the government.

Macron has vowed not to back down on the anti-pollution fuel taxes that sparked a revolt in small-town and rural France, but on Monday the government indicated that it might make concessions.

Philippe’s office said he would announce “measures” in favour of the protesters.

Macron postponed a planned visit to Belgrade due to the “problems” at home, his Serbian counterpart President Aleksandar Vucic announced on Monday.

Macron has not spoken publicly about Saturday’s destruction in Paris since his return from a G20 summit in Argentina at the weekend.

On Monday, he had lunch with police from a Paris barracks that was involved in trying to quell the riots.

The 40-year-old centrist was elected in May 2017 on a pro-business platform that included measures to incite companies to invest to create jobs.

Immediately after coming to power, he pushed through tax cuts for entrepreneurs and high-earners.

Those measures stirred anger among the “yellow vests” who have blocked highways around the country over the past two weeks.

Some of the protesters are demanding that a fuel tax increase planned for January be suspended.

But many are holding out for more, including a rise in the minimum wage and pensions.

“The longer this goes on, the higher the political price,” Bruno Cautres of the Cevipof political research institute told AFP.

Paris police said 412 people were arrested during the clashes in the capital on Saturday and 363 remained in custody, according to the latest figures.

Some of those who appeared in court Monday had long criminal records for violent crime and clashing with police, but others included a 21-year-old with a master’s degree in finance, sources said.

The unrest degenerated into arson and looting around the Champs-Elysees avenue and other tourist attractions on Saturday.

Business leaders warned it could cause shoppers to flee during the busy end-of-year holiday period.

Economy Minister Bruno Le Maire said Monday that hotel reservations had fallen by “around 15 to 20 percent” since the start of the protests.

On Monday, the protests spread to around a hundred schools nationwide, which were partially or totally blocked by teenagers voicing frustration over university entrance reforms.

At the Spanish border, thousands of trucks were caught in tailbacks stretching nearly 20 kilometres as the protesters blocked roads.

Far-right National Rally party leader Marine Le Pen, who has been cheering on the protests, tweeted that she had asked Philippe during their meeting to “end the strategy of confrontation chosen by Emmanuel Macron for the past three weeks.”

A state of emergency had been mooted after rioters ran amok in Paris, attacking the police, torching cars, vandalising shops and setting six buildings alight.

But on Monday deputy interior minister Laurent Nunez said that was “not on the table for now”.

Le Maire, the economy minister, said the solution for tackling low purchasing power for struggling families lay in reducing the overall tax burden in France, which is among the highest in Europe.