“The UN special envoy to Yemen, Martin Griffiths, communicated to us that coalition forces and the Yemeni [self-proclaimed] government have also signed the prisoner exchange agreement that was signed in November by the Houthis,” he said.

Murtaza also noted that the agreement marks the first step towards resolving the humanitarian crisis in Yemen.

Peace talks between Yemen’s opposite parties are expected to begin in Sweden as early as Wednesday.

Griffiths arrived in Sana’a, the Houthi-run Yemeni capital, on Monday to escort the Houthi delegation to the planned discussions.

Meanwhile, a UN source told Reuters that the former Saudi-backed regime had also confirmed that it would follow the Houthis to the Sweden peace talks.

On Monday, a UN-chartered plane carrying 50 wounded Houthi fighters and three Yemeni doctors left Sana’a for Oman’s capital, Muscat, for treatment. The plane took off just a few hours after the UN envoy arrived in Sana’a.

Griffiths thanked all parties for facilitating the evacuation of the wounded fighters.

Mohammed al-Bukhaiti, a member of the Houthis’ political bureau, told Reuters that the movement’s delegation would travel to Sweden Tuesday morning on a plane provided by Kuwait and accompanied by Griffiths.

However, Yemeni Minister of Information Daifallah al-Shami said that the Houthis had not received any official invitation for the UN-mediated peace talks in Sweden.

“So far (December 2), we have not received any invitation directly from the UN on peace talks in Sweden. From the efforts of UN and its special envoy, we can’t see any clear vision for peace talks,” he said.

The previous round of the peace talks collapsed in the Swiss city of Geneva in September.

Lawrence Davidson, professor at the West Chester University, has told Press TV, that the prisoner exchange deal was made possible because of mounting international pressure on the Riyadh regime over the killing of critic Jamal Khashoggi.

“A lot of it has to do with the diplomatic pressure because of the murder of a US-based Saudi journalist and the anger that is generated in Congress and also other countries that are refusing … to sell them (the Saudis) weapons,” he said.

“So, this is a tactical move on their part to try to relieve some of that pressure. How far it will go, we will have to see,” he added. 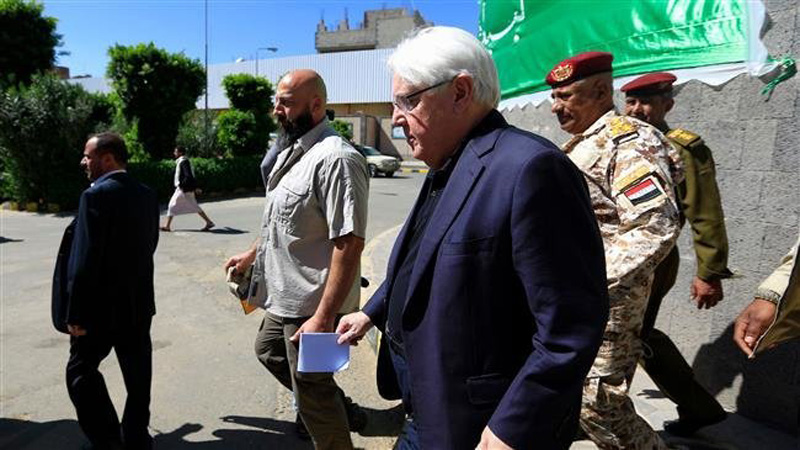 Khashoggi’s murder is widely blamed on Saudi Crown Prince Mohammed bin Salman, who has been leading the war on Yemen in his capacity as the kingdom’s defense minister.

Saudi Arabia and its allies launched the deadly military aggression against Yemen in March 2015 in an attempt to reinstall the country’s former Riyadh-allied regime and crush the Houthis, who have been running state affairs in the absence of an effective government.

The war is estimated to have left 56,000 Yemenis dead.

Back in June, the Saudi-led coalition launched an offensive on the port city of Hudaydah despite international warnings that it would compound the war-torn nation’s humanitarian crisis.

The Saudi-led offensive, coupled with a naval blockade, has destroyed Yemen’s infrastructure and led to famine in the import-dependent state.

About 8.4 million Yemenis are now facing starvation. The number is likely to increase to 14 million.