Ayodhya; snowballing into a bigger crisis 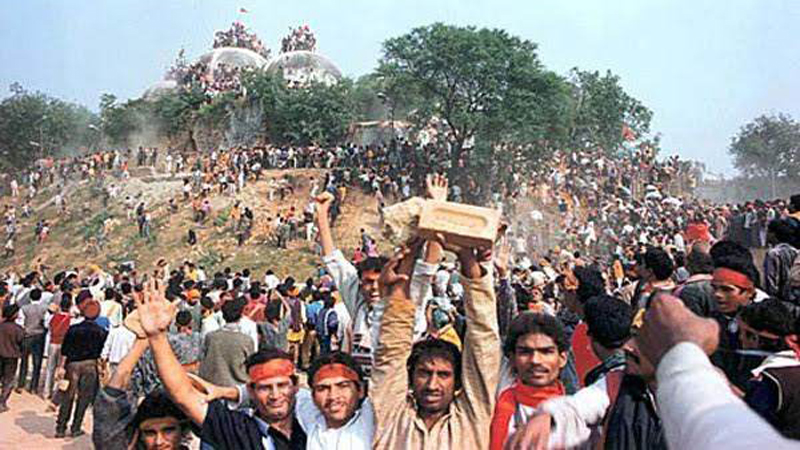 The Shiv Sena’s move to hold a massive rally, last Sunday, in Ayodhya urging the putting up of a Ram temple on the site of former Babri mosque, has many interpretations. The rally supported and attended by BJP parent party Rashtriya Swayamsevak Sangh (RSS) is primarily viewed by others as a political strategy by the BJP to divert public attention ahead of the Lok Sabha polls.

“To divert attention from their failures, they raised the Ram Mandir issue. Had their intentions been good they needn’t have waited for five years. It’s their political tactic, nothing else. Whatever their associates like Shiv Sena and VHP are doing is part of their conspiracy,” four times Chief Minister of Uttar Pradesh and leader of Bahujan Samaj Party chief, Mayawati said in a statement.

The next hearing of the Supreme Court petitions on the disputed site is due in January 2019. The last structure on the site, Babri Mosque, was demolished in 1992 by Hindu nationalist groups led by the BJP, RSS, Vishwa Hindu Parishad (VHP) and a handful of other right wing groups. It was argued that the mosque has been built by demolishing a Hindu temple.

However the archaeological excavations carried out in the 2000-2003 period following court orders, have not found any evidence of an ancient Hindu temple in the site. On the other hand evidence of the existence of a Buddhist centre with ruins of stupas and Buddhist style pillars and structures, surfaced.

A petition urging the authorities to go by archaeological evidence and do justice to Buddhists was filed in the Supreme Court in March this year by a Buddhist. In July, the bench agreed to admit a writ application filed by another Buddhist petitioner claiming the Buddhist right to the site.

However all this is now politically undermined in the loud din of the Hindutva movement led by BJP Chief Minister of Yogi Adityanath and ably supported by the RSS and the Shiv Sena, the latter accused of several incidents of communal riots including 1970 riots in Maharashtra town of Bhiwandi which killed about 250 people, the 1984 riots in the same city that killed 146 people and 1992-1993 Bombay riots that massacred nearly 700 civilians.

Meanwhile at last Sunday’s gathering RSS Chief Mohan Bhagwat found fault with the courts for not making Ram temple a priority. “Ram temple was not a priority for the Supreme Court” said Bhagwat whose organization stands accused of demolishing the Babri mosque in 1992 along with its off shoot BJP and a slew of right wing entities.

“We brought down the Babri mosque in 17 minutes, so how much time for a law? How much time does it take to draft the papers?” a senior Shiv Sena leader Sanjaya Raut had said at Sunday’s rally.

The fact that the present political build up in Ayodhya belittling the judiciary is detrimental to the law and order situation in the country has been brought into the attention by the Samajwadi Party (SP).

“A similar situation arose in 1992 and it is for everyone to see what happened… the matter is before the Supreme Court and everyone should show patience,” Shivpal Yadav, the younger brother of Samajwadi Party (SP) leader Mulayam Singh Yadav was quoted as saying.

Yadav pointed out if the organizations asking for a Ram temple that are unable to wait till the courts’ ruling there’s enough and more land in and around the site to build a temple.

“Why this obstinacy to build a Ram temple at the spot where Babri mosque was razed,” he had asked.

The simmering tensions in Ayodhya and the 20 percent Muslim strong state of Uttar Pradesh are likely to further strain the already fragile relations between Hindus and Muslims in the country. If Prime Minister Narendra Modi fails to exercise restraint at least at this juncture the whole episode is likely to boomerang on his government.