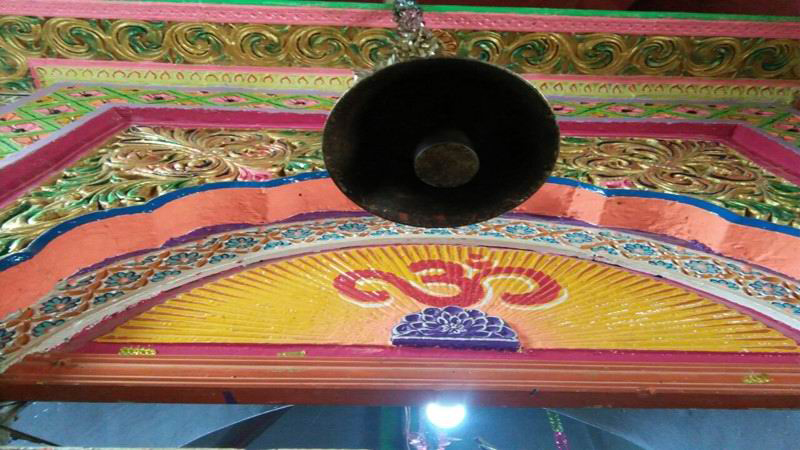 While passing through the Tando Wali Muhammad area, Hyderabad, I witnessed a lot of modern and British era buildings, but in between those structures, I found a yellow temple that had a Shikhara (spire) and a small umbrella-esque structure right beside it, which immediately caught my attention. Just below the spire, I found a really long name of the temple, ‘Goswamiparshotam Gir Chela Goswami Nihal Gir’. It was not an ordinary temple; it carried deep history with it.

Goswami Parshotam Gir Chela Goswami Nihal Gir Temple was initially built way back in 1895, making it more than a century old. However, it was re-built in 1945.

When I began my journey into it, I found a really narrow entrance – a bit lower than street level – and so was its ceiling. I also found an old water-tap on the left and a small door that led to the small room on the right side. Just besides that door, I found a staircase which lead to the sanctuary. When I looked up from there, I found the spire that actually gave a very pleasing look. Indeed, it was beautiful in its own regard.

An Imam of a nearby mosque opened a madrasa there that caused a lot of conflict between worshipers of both religions. Worshippers of the temple, as well as the minority leaders, approached the Auqaf Department to help them out with this issue. But unfortunately, up to this day, none of the high profile ministers and minority leaders have taken any action on this matter

As soon as I reached inside the temple, where the worshipers worshiped, I came across the statue of Hanuman. According to the caretaker of the temple, this Murti (statue) was brought here by the worshippers. This Mandir (temple) is called the Shiv Mandir, largely known as the Shiv Shanker Mahadev temple. The care-taker also pointed out Shiva’s Murti to me, which was right in the opposite room of Hanuman’s Murti.

The door through which I entered the room, where a Shiva ling was placed, was decorated with green leaves and flowers. I also found a sculpture of Shiva’s sacred bull, Nandi. According to some gurus and a scholar of the Hindu religion, ‘Nandi’ was said to be the Guardian God of Kailasa, the house of Lord Shiva.

The temple is being taken care of by Ashok Kumar Meghwar and his elders. The story of Ashok and his family is too absorbing. His family and his elders have been taking care of the temple for a while as they couldn’t leave during the partition. The rise of communalist violence in the neighbourhood forced Hindus to leave their houses, properties and homelands, and migrate to India, but Ashok’s elders couldn’t. Ashok said, “There was a sudden death in the family, and a series of other events took place, which actually made our elders stay in Hyderabad. My baba was quite young when he witnessed all of this.”

According to worshipers, this temple was used as an Ashram, but it was recently encroached upon by some organisations and agencies. Consequently, today, modern structures can be found in front of the temple or what used to be the property of the temple. Some sources said the temple remained closed for a long time after the partition, and some casts and communities like Bheel, Kolhi, and Menghwar played a vital role in restoring the temple once again.

They also mentioned that after the restoration of the temple, a few high-class communities (Brahmans) made an issue out of the fact that lower class communities didn’t have any right to the ownership of gods by themselves and couldn’t take care of holy places, due to their poor socioeconomic status. 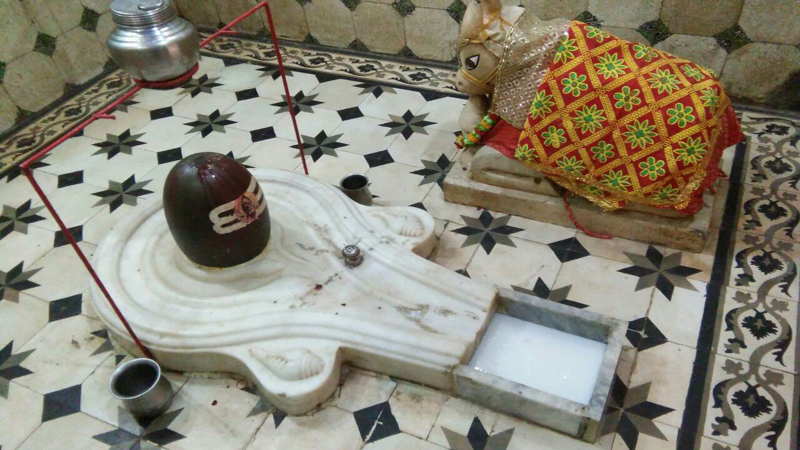 According to Ashok, after a few years of its reopening, the Auqaf department of the government of Sindh seized the ground floor of the temple. Later, an Imam of a nearby mosque opened a madrasa here that caused a lot of conflict between worshipers of both religions. Worshipers at the temple, as well as the minority leaders, approached the Auqaf Department to help them out with this issue. But unfortunately, to this day, none of the high profile ministers and minority leaders have taken any action on this matter.

He also said that every Monday a weekly hymns session is held in the temple along with an annual Maha Shivratri festival, which is vibrantly celebrated by the Hindu community across Pakistan and beyond.

It is undoubtedly sad to see such historical heritages in such condition. This is not only the tale of this temple but of many other historical buildings and other heritage sites being which are being ignored by the government. It is important for all of us to protect these places of heritage. Otherwise, our generation will be the last one to lay their eyes on them.

The writer hails from Hyderabad, Sindh, and can be reached at smmathrani1@gmail.com