PSX Index trades under pressure ahead of MSCI review announcement 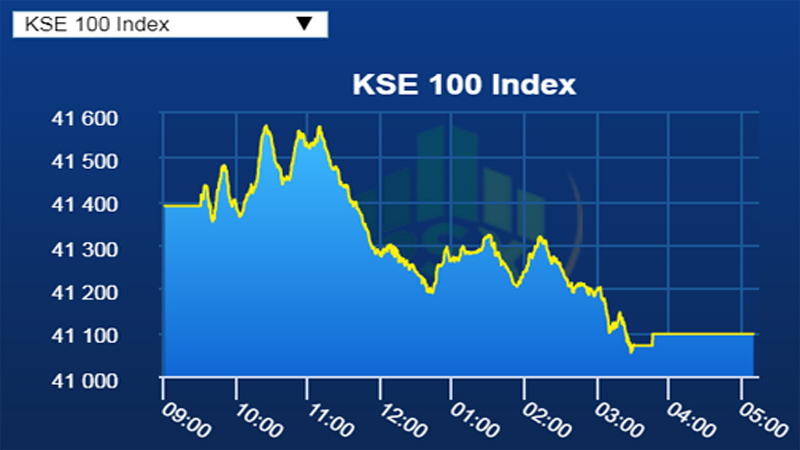 Benchmark KSE-100 Index traded under pressure Monday due to lack of triggers as Ministry of Finance discusses bailout package with IMF Officials in Islamabad. The market closed on a negative note, as the benchmark KSE-100 index shed 292 points, decreasing by 0.7 percent from the previous trading session.

The index opened on a positive note, continuing on an upward trajectory, making a high of +183 points; however, it slid in the second half of the trading session to close at 41,096 points level.

An analyst at Elixir Research Muratza Jafar expects Lucky Cement Limited to be downgraded from MSCI Emerging Market Index to Small Cap Index while United Bank Limited remains a borderline case. Both the stocks remained under pressure throughout the day, and accounted for a decline of 90 points in KSE100 Index, as investors preferred to reduce allocations ahead of review announcement.

“We expect the market to find support around 40,500-40,700 levels as details from Bailout Package emerge out of the ongoing talks with IMF”, added Jafar.

On the economic front, Pakistan is to receive $1 billion dollars from Saudi Arabia in a day or two out of the total $3 billion it committed to support the country’s balance of payment, said by Finance minister Asad Umar. Moreover overseas Pakistani workers remitted $7,419.98 million in the first four months (July to October) of FY19, compared with $6,444.46 billion received during the same period in the preceding year.

An equity analyst Maaz Mulla expects the market to depict a similar trend, therefore, he recommend investors to see any downside in the market as an opportunity to buy in cement, consumer and banking sector.