Song of the Silk Road 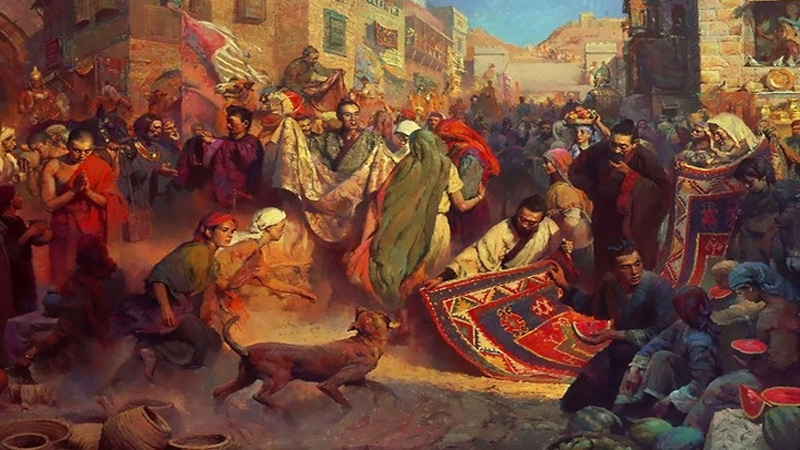 In Tian Shan mountains of the legendary snow leopard, errant wisps of mist float with the speed of scurrying ghosts, there is a climbers’ cemetery, Himalayan Griffin vultures and golden eagles are often sighted, though my attention is completely arrested by a Blue whistling thrush alighting on a rock— its plumage, its slender, seemingly weightless frame, and its long drawn, ventriloquist song remind me of the fairies of Alif Laila that were turned to birds by demons inhabiting barren mountains.

The sense of enchantment is powerful and not entirely unexpected. “Ay Pari” (Oh Fairy!), sung by the Badakhsan Ensemble, I imagine as a song sung in a human language in response to the eloquent whistle of the thrush, really a fairy under a spell. The word “fairy” in English may have been derived from the ancient Zoroastrian Persian “pari:” the first mythic creature I remember from lores and lullabyes and the television show AlifLaila (Arabian Nights) in Urdu. The song, in an eastern Persian dialect, comes from the heart of the Pamir mountains— the range that not only joins the Tian Shan in Kyrgystan to the north, and to the south, borders the Hindukushthe mountains of my childhood in Pakistan, but the source of the famed river Oxus or Amu Darya—the drainage area of which was once the space between the empire of Genghis Khan, and over a thousand years earlier, of Alexander the Great. Classical Persian poetry and literature amply mythologize and illustrate the drama of empire that took place in these regions, and some of these artistic/literary masterpieces sparked the imagination of Victorian poets such as Mathew Arnold who describes the river Oxus in his poem Sohrab and Rustam:

Oxus, forgetting the bright speed he had

A foiled circuitous wanderer: — till at last

The longed-for dash of waves is heard, and wide

And tranquil, from whose floor the new-bathed stars

Emerge, and shine upon the Aral Sea.

My fascination with this place is not accidental— my study of intersections between East and West is likely driven by my linguistic heritage. Urdu, my mother tongue, is a child of many parents; its lexical richness borne of diverse cultures carried along the Silk Roads crisscrossing the Pamirs— trading, warring, marrying, exchanging influences in art, music, spirituality, poetry, cuisine and the mythic imagination.

I speak about these influences on Urdu and the Ghazal form, as I read passages from my book Ghazal Cosmopolitan at the American University of Central Asia, at an event that is part of the reason I find myself here in Kyrgystan. The young women organisers of my book event are bright and engaging— they belong to the generation of Afghans whose parents were children during the Soviet war, my generation, the displaced generation that I write poems about; my work, I hear, has been part of the literature course at AUCA, taught by the American poet Raphael Dagold. I feel an affinity with these students— they are sensitive but untouched by cynicism, the faces of a future I could not have predicted during the many traumatic decades of recent Afghan history. During my brief stay in Bishkek, I have the finest host and companion possible— Haniya Tirmizi— who weaves in and out of English, Russian and Urdu, as we walk through Osh bazar, my first actual experience of what I have imagined a Silk Road marketplace to be like (selling “An assortment of crooked/ and straight arrows/for the crest of a bulbul/ or a handful of sesame,” lines from Tradepublished by the Irish poet Chris Murray.

Throughout the six years I have been reading and writing about the Silk Road, I have hungered for the spontaneous theater that a bazar is— in the rising and falling rhythms of bargaining, banter, vendor songs, the strategic, pleasing arrangement of goods, the feasts of colors and aromas, there is an underlying confluence of art and trade, a tension between spirit, form, purpose, and value, much like the making of a poem. No other marketplace showcased the wares of more abundant and diverse cultures than the bazars of the ancient Silk Roads, the network of trading routes across some of the oldest civilizations. If Istanbul’s grand bazar is a taste of the old marketplace on a massive scale, imperial, refined, modifying and preserving itself continuously, Osh bazaar feels like a labyrinthine, other-worldly place where Saum, the currency used, has a denomination of three, the figure of magic spells.

In these final days of autumn, there is a thrill in the cool, golden sunshine; the air has an unmistakable alpine crispness. We buy felt caps and tea-cozies with embroidery, bread with floral designs. “Kishmish” (sultana raisins) and all manner of nuts, spices, teas, and fruits heaped on carts in Osh bazar, or displayed in Bishkek supermarkets evoke scenes from stories of childhood: Arabian Nights, Qissa-e-Chahar Darwish, Amir Hamza; also, narratives of the Great Game, a geopolitical intrigue involving massive swathes of fuel- and mineral-rich lands in Asia, the control of which began with the spice- and tea-trade a few centuries ago.

If Istanbul’s grand bazar is a taste of the old marketplace on a massive scale, imperial, refined, modifying and preserving itself continuously, Osh bazaar feels like a labyrinthine, other-worldly place where Saum, the currency used, has a denomination of three, the figure of magic spells

Ascending the Ala Archa National Park, we sense a wintery desolation. Haniya’s garden which was a festival of roses in honeyed sunlight this morning, would be covered in deep snow only two days later. I see the Ak-Sai river, which flows with a melting glacier as its source. I hear of trout. Just when we reach the top and I take quick strides to see a yurt in real life, it begins to snow; I open my mouth to take in some Central Asian flurries. The mini “foyer” and simple threshold of the yurt give no clue to the festive interior, even more magical when seen through the crack of a locked door. 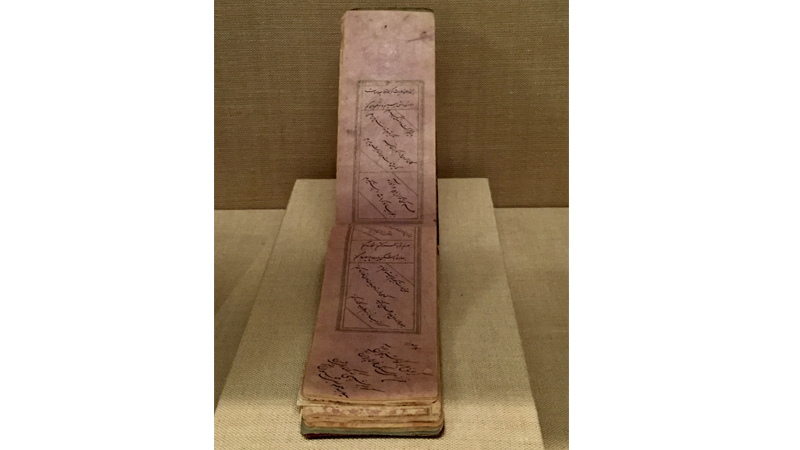 Images of the winged creature “Pari” enlivens a delicately stenciled page of this oblong framed Persian Ghazal anthology from the 14th century.

In the juniper forests that the Ala Archa Park is named after, wild goats, deer, and (rarely) snow leopards are spotted. I see none of these animals, but my heart skips a beat when I see the famed Central Asian horses—they are as sleek as the numerous depictions I have seen in miniatures and paintings in museums. I enjoy sharing some of the excitement of my visit with my illustrious dinner hosts Sohail and Iram Naqvi, sharing “Ghazal for the Girl in the Photo,” which I wrote for Sharbat Gula (the subject of Steve McCurry’s iconic photograph) whose suffering, relate-able because of my childhood memory of Afghan refugees in Peshawar, may be called a casualty of the Great Game.

Leaving this land of legends and losses, the song of the native Blue whistling thrush becomes doubly haunting as it combines with the loveliness of an Urdu song Haniya sings on our drive down from Ala Archa, a song, not for a fairy, but for a loved one soon to be married—this song, both in diction and melody, is a shiny thread of the vast but tightly woven culture of the Silk Road.