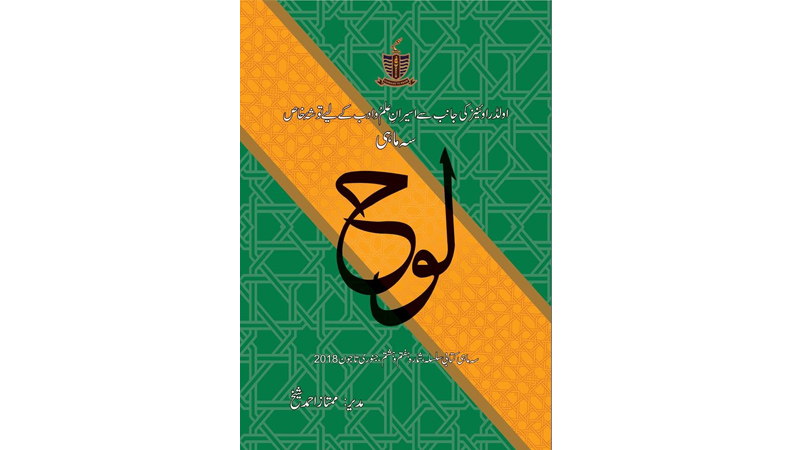 The quarterly literary journal is a gift to the literature lovers by Old Ravians represented by Mumtaz Ahmad Sheikh. As usual the latest version covering January-June 2018 period is huge in size comprising 672 pages. The editorial ‘Harf-e-Lowh’ celebrates the success of its ‘Afsana Number’ with caution. The editor does not believe in comparing its quality with the others in market. He just desires to keep on lighting his own candle as far as literature promotion is concerned. As expected the journal starts with Hamdia poetry from Jalil Aali and Saleem Kauser followed by Naats from Tauseef Tabasum, Ehsan Akbar, Khalid Iqbal Yasir and Khadim Hussain Bhatti.

A very exhaustive analysis of Government College’s annual magazine ‘Ravi’ has been done by Muzaffar Ali Syed when he was a student in the college. The confusion regarding whether to make ‘Ravi’ a literary journal or to restrict it to cover the college activities was removed by Sufi Tabassum when he announced that Pitras Bukhari desired it to be the latter. The selection of editor and assistant editor was an arduous task. According to Muzaffar, in a 1950 session, an attempt was made to locate and include some writers from around the corner. Ashfaq Ahmad was one who had joined Pitras Bukhari’s Masters Class. No information was available about the writing prowess of Qudsia Chatta, later known as Bano Qudsia. Raheel Akbar Javed painted less but wrote more short stories. Saeed Akhtar Durrani (who died recently in Birmingham) had turned his interest more towards Physics rather than literature. The aim was to attract writers to give a literary touch to the magazine rather to run after known names. Regarding women writers from Sondhi Translation Society and Bazm-e-Iqbal, only one Fatima Akbar Zaidi was located who claimed to have been published in newspapers. When asked to provide something for ‘Ravi’, she provided an article written in favour of censorship. Another lady Miss. Rati Akhlaq Hussain knew all the poetry of Majaz. She was daughter of social worker Huma Begum and writer Chaudhry Muhammad Ali Rodelvi. When asked to comment on Majaz, she sufficed to say ‘Shair Tau Woh Acha Hei Par Badnam Buhut Hei’ (he is a good poet but is notorious). Only three short stories could be arranged for Ravi’s short stories number. Anyhow the first issue before sending for printing was shown to Khwaja Manzoor who showed his surprise at the contribution of new writers. Moeen Qureshi was made editor of English section. Later addition of ‘Qand Farsi’ and ‘Ravi Di Leher’ established Sufi Tabassum as an expert poet in three languages. Muzaffar has especially mentioned the sittings at Faiz’s place in the New Hostel. This is where Haneef Ramay, Ahmad Mushtaq and Ghalib Ahmad also stayed. Nasir Kazmi, Waheed Qureshi, Intizar Hussain and Ahmad Mushtaq were frequent visitors. Outside poets were considered to be included like Nadeem Qasmi, Mumtaz Mufti, Manto, Askari, Syed Abid Ali, Mumtaz Shirin, Qudratullah Shahab, and Majeed Amjad but neither Ravi had any monetary reward from them nor did they offer their help. It was thought that some senior poets or writers who were ignored for some reasons be approached like Yousuf Zafar, Mukhtar Masood and Meem Hassan Latifi, Azeem Qureshi or those who used to walk on roads like Nasir Kazmi, Shohrat Bukhari, Ahmad Mushtaq and Shahid Naseer, the latter never claimed to be a poet par excellence. Ravi managed to retrieve a piece or two from some of these names. Intizar Hussain who had just returned from India wrote a travelogue titled ‘Sanjh Hui Sandes’. It was rejected by Anjuman Taraqi Pasand but accepted by Halqa. After great struggle only three pages of outsiders and rest from within GC saw light of the day. The responsibility of 1951-52 sessions fell on Muzaffar Ali Syed. The rest is history.

Ali Tanha contributes an essay on Munnoo Bhai titled ‘Munnoo Bhai Ka Mashghala Udasi Kyun Tha’ (why was remaining sad a hobby for Munnoo Bhai). He left this temporary abode on January 19 this year. This reviewer attended his funeral ceremony in Riwaz Gardens, Lahore. His real name was Munir Ahmad Qureshi and was born in Wazirabad. He was an activist and made a name in column writing from 1957 onwards. He was impressed by Charagh Hassan Hasrat and Ahmad Nadeem Qasmi. The poet and writer hidden in him came to the surface when he got Masood Ash’ar as editor in the daily Imroze. He became popular by writing TV drama serials like Jhok Syal, Sona Chandi, Dasht, Jazeera, Ashiana, Gum Shuda Kahani and Bau Train, famous for their themes and treatments. Remaining sad was in his temperament. His 85 years of age befits Ahmad Zafar’s couplet ‘Khuda Parast Tau Khuda Sei Lau Lagate Hain/Khuda Ki Shan Magar Admi Ko Bhool Gaye’ (God worshippers spend all their energies in trying to be close to God but in the process forget the plight of human being) (Page 53).

An essay on Saqi Farooqi by Dr. Saadat Saeed reveals his migration from India to Bangladesh, then to Pakistan and then to UK. It also elaborates his opinion on various literary figures. For example he says that Faraz who had once accused Saqi that only five percent read his (Saqi’s) poetry whereas ninety-five percent read his (Faraz’s) poetry was forgetting that the fourteen/fifteen years old shall forget Faraz’s poetry once this lot entered adulthood. About Sahir Ludheyanvi’s poetry, Saqi’s opinion was that his poetry can be written on postcards or on Rickshaws. Saqi liked Akhtar Hussain Jafri’s poems with reference to his book ‘Aaina Khaana’. Munir Niazi according to Saqi had become stagnant lately. Iftikhar Jalib and Anis Nagi only used metaphors in their poetry and not the real thought content they possessed. Saqi believed that Nasir Kazmi, Munir Niazi and Akhtar ul Imaan were custodians of new diction in poetry. About Dr. Wazir Agha and Ahmad Nadeem Qasmi, he sometimes liked their poetry, sometimes found it tolerable and sometimes bad. About his own poetry Saqi believed that just labeling him as poet of saying Geets is not fair. To arrange funds for migration to UK he had sold his poetry (Geets) to Radio Pakistan Karachi and Hyderabad and now when some of these songs are broadcast, he dreads when his name is announced. In this essay by Saadat Saeed lot more revelations have been made with reference to Saqi Farooqi (whether we agree with his opinion or not) – Page 56. Printed by Sang-e-Meel, the book titled ‘Surkh Gulab Aur Badar Munir’ comprises Ghazals and poems by Saqi Farooqi written during the period 1955 to 2004. He has done equal justice to society, human being and nature in his Nazms. He has always been proud of his commitment to human beings. Dr. Saadat Saeed’s tribute to Saqi Farooqi appears in his book ‘Urdu Nazm Main Jadeediat Ki Tehreek’ (Modernism in Urdu poems).

Dr. Nuzhat Abbasi pays tribute to another creative poet Risa Chughtai who died in Karachi. Earlier Munnoo Bhai and Saqi Farooqi had left this world. Initially Risa was affiliated with Progressive Movement. In his Ghazal, he followed the treatment given earlier by Nasir Kazmi and John Elia.

A large section on Nazms adds to the beauty of this issue of Lowh. Naseer Ahmad Nasir says a poem ‘Meri Nazmain Bachon Jaisi Hain’ (my poems are like children) – Page 258. He says his poems are small in size like children’s’ toys. They are like dwarfs of Gulliver Travels. They have talks like raw day with innocent naughtiness. Ali Muhammad Farshi on the other hand says that he is afraid of writing poems (Page 260). A unique thought appears in Hussain Majrooh’s poem ‘Tanhai Ki Sale’ (sale of loneliness) – Page 264. He also offers a solution to loneliness; a word of love.

A mound of essays on varied topics appear in the section titled ‘Laga Raha Hun Mazameen Nau Kei Anmbaar’ (I am creating essays in a heap) – Page 315 to 476. An illuminating essay by Dr. Arshad Iqbal is titled ‘Manto Ki Jinsi Maanawiat’ (meanings of the sexual aspects in Manto’s stories). This has been used as a weapon against Manto by his adversaries in his early days but is taken as bold metaphor against the social injustices in the society by the illuminating minds of today. The reason for the former impression was that the critics of his era were not familiar with the psychosexual element of creative literature. Quoting examples of Manto’s short stories, the author concludes that Manto was fully aware of the immensity of literature and his creative endeavors were in no way vulgar or troublesome.

So much of quality material available at one place, what else does one need? This is a great job done by a dedicated Ravian, Mumtaz Sheikh!