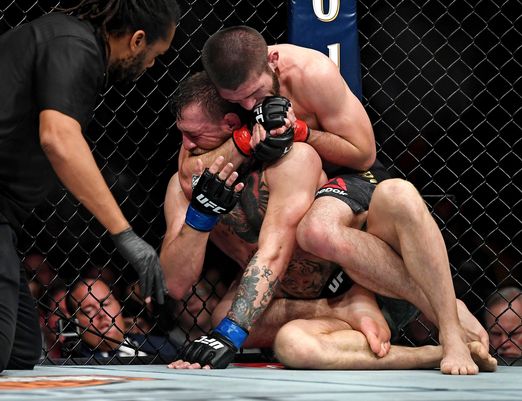 This, however, did not end there. After getting the tap via a neck-crank, a fired-up Khabib went on to exchange heated words with Conor’s team-mate Dillon Danis, who said a few harsh words which infuriated Khabib further leading to the post-fight chaos.

The situation got so much worse that both the fighters had to be escorted backstage. It is not sure whether Khabib will have to face repercussions for what he did, but McGregor, who was attacked by two of the Eagle’s team members, has opted against taking legal action.

Khabib had earlier said that he was going to maul McGregor. “I will make him humble. I will smash him, make him tired and choke him out,” Khabib did exactly what he had said. Given the entire situation, the rivalry between Khabib and McGregor might not be over yet, especially when the entire teams are at the end of it all.

However, keeping in view Khabib’s performance inside the octagon against a challenger that many had picked to win, there should never be a rematch. McGregor has never been beaten this bad inside the cage, and Khabib has never fought any other way but to maul his opponents every second.

Khabib is arguably the most dominant fighter of all time it’s either him or Jon Jones.#UFC229 pic.twitter.com/qHjsA7Znns

There is no guarantee of what would happen next, but the social media does have a lot of interesting takes. Here’s how Twitter is buzzing with UFC 229 aftermath.

Let’s start with the legend himself, Mike Tyson.

Watching the @TheNotoriousMMA vs @TeamKhabib fight. Unimaginable never thought it would go down like this. Crazier than my fight riot.

When Dana White refused to hand Khabib his belt, this is what the Eagle said.

Dana says that Khabib said inside the cage: "If I have to be arrested, I'll be arrested. I just want you to put my belt on me."

This user wants a rematch, but those in his comments sections beg to differ.

Khabib’s team acted like bitches after the match: Yes

Should there be a rematch?

Dana White is not sure what’s going to happen, but then again, he never is.

Khabib says Putin just called him to congratulate him on his victory. #UFC229

Khabib Nurmagomedov is here. He starts by apologizing to the commission, then lists a series of slights McGregor gave him in the lead-up to the fight – the insults, the bus attack, etc. #UFC229

For those that missed what happened after the McGregor vs Khabib fight #UFC229 pic.twitter.com/I7hjiWAIAn

The truth is, no one knows what is going to happen. Khabib might get suspended for some time and potentially lose his belt, but after a performance like tonight, there is everything the UFC would do to keep the star Khabib Nurmagomedov has become.

Khabib mauled and dominate one of the greatest fighters of all time should be the bottom-line of today’s story.