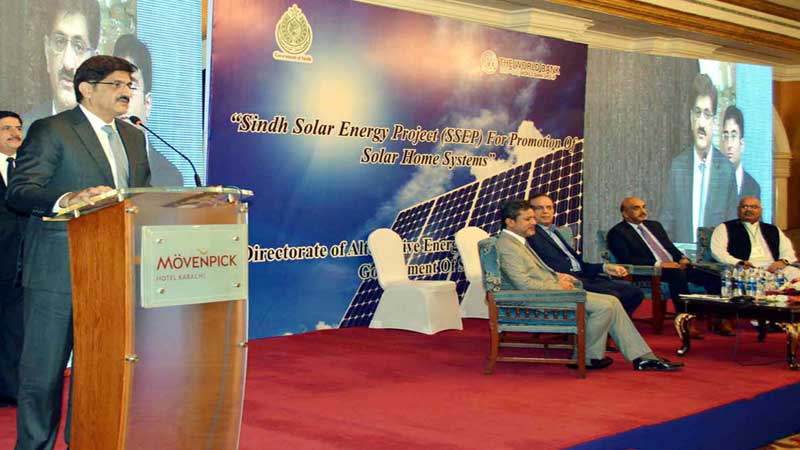 This he said while delivering his inaugural speech at a seminar organised to discuss the deployment of Solar Home Systems (SHS) under the Sindh Solar Energy Program (SSEP) on Wednesday. According to details, SHS would be installed in the rural off-grid areas of Sindh.

During his speech, CM Murad shared that the SHS project would not just cover the off-grid areas but also areas where electricity was available but power outages extended up to 12 hours a day. Murad Shah said that although energy was a basic need for socio-economic development in this modern era, a sizeable population still did not have access to electricity. “It is the aim of our government to make affordable electricity accessible to all,” he said.

CM Murad said that the proposed project was first step towards achieving the goal of making electricity accessible to all. Furthermore, he asserted that the project would not just help in the resolution of the ongoing energy crisis in Sindh but also cater to the global concern of environmental degradation by introducing alternative and environmentally friendly means of generating energy. “Sindh is suitably placed to access and utilise donor financing options to scale-up solar energy,” said the CM. “Sindh has sufficient solar and wind power potential,” he added.

Murad Shah stated that the province had relatively low level of electrification, especially in remote areas. “Through this project, remote areas would have access to electricity since they would be using solar photovoltaic (PV) cells to generate power,” said the CM. “This is also an opportunity for Sindh to enhance economic development through the use of domestic renewable resources, and gain familiarity with solar technology and its operation,” he added.

Discussing the feasibility of generating electricity by utilizing wind energy, CM Murad said that Sindh had ample potential for power generation through wind. He said that the province could play a leadership role in demonstrating conjunctive use of solar and wind power in a manner that optimised the use of evacuation infrastructure.

CM Murad said that a pragmatic approach would be employed to assess the viability of solar power generation at different scales. He said that there were three categories that they were considering currently: rural off-grid, urban rooftop and utility scale solar. “It is a proven fact that solar energy is not just technically feasible but also cost-effective too,” he said, adding that the recommendations of this consultative seminar for devising a new solar strategy would move the nation towards greater energy access and energy security.

Shah said that the idea to analyse the opportunities available to Sindh occurred to him during his meeting with the president of World Bank (WB) last year. “Our mission is to provide sustainable energy to all. We want to electrify every single household in the province,” he said. Expressing the hope that experts would find pragmatic solutions to ensure energy access to every part of Sindh during the seminar, the CM said that even though SHS was an ambitious program, it was also a bold initiative.

Provincial minister for Energy lmtiaz Shaikh, while reaffirming CM Murad’s statements, said that energy was the lifeline of the economy. He said that energy provision had a direct impact on socio-economic development of a region. He added that the provision of sustainable energy to all was one of the topmost priorities of the United Nations (UN). “The Energy department with a proactive approach compatible with Sustainable Development Goals (SDGs) is expected to contribute in the development and progress of the country,” he added.

He said that the development of wind corridors at Jhimpir and Gharo was in full swing. “around 20 projects are producing above 1 gigawatt (GW) electricity from wind,” he shared, adding that several other such projects were at various development stages. He further noted that Sindh took the lead in establishing its own power transmission and dispatch company, STDC which was managing transmission lines from Nooriabad to Karachi.

Mr Shaikh said that the SSEP Programme was mainly focused on replacing conventional methods of energy production with state-of-the-art new solar technology in order to achieve the target of providing electricity to all.

IDEAS, a platform for shared knowledge and expertise: CM Murad

CM Murad Ali Shah said that the progressive evolution of IDEAS had transformed it into an iconic event for cutting edge technology demonstrations as well as a forum for shared knowledge and expertise in Pakistan.

This he said while presiding over the third steering committee meeting of the 10th edition of International Defence Exhibition and Seminar (IDEAS). The three-day seminar is scheduled to be held from November 27 to 30 at Expo Center.

CM Murad said that the third meeting of steering committee had been convened to finalise the conduct plans of IDEAS 2018. He further said that he was happy to host the meeting in coordination with Defence Export Promotion Organization (DEPO). CM Murad said that the IDEAS was a biennial event of national and international defense industry which was first organised in 2000. CM Shah said that IDEAS was a shared platform for global peace, stability and prosperity. He said that a large number of foreign delegations as well as local and international defense manufacturers attended the event. “The international reception IDEAS has received truly reflects our deeply embedded and mutually beneficial relations with the international fraternity,” said the CM.

Speaking of the three-day seminar, CM said that the IDEAS also served as global rendezvous for sharing of common views on contemporary defence and security issues. The chief minister said that IDEAS 2018 was meant to pave the way for fostering and promoting Pakistan’s strategic relations with international partners. “It will also further accelerate the commercial exchange between delegates, trade visitors, defence officials and OEMs from within Pakistan and abroad,” he said.

Murad Shah said that the preparations for this very important event had already commenced at national and international level in coordination with all relevant stakeholders. He said that the government would offer full support for the successful execution of this mega national event.

Hayat said that IDEAS Karachi Show will exclusively be arranged for the people of Karachi at Sea View (Nishan-e-Pakistan) on 29 November 2018 and the event would also include a Cultural Show.