NGOs protest against ‘catastrophic’ deforestation by feudal lords in Sindh 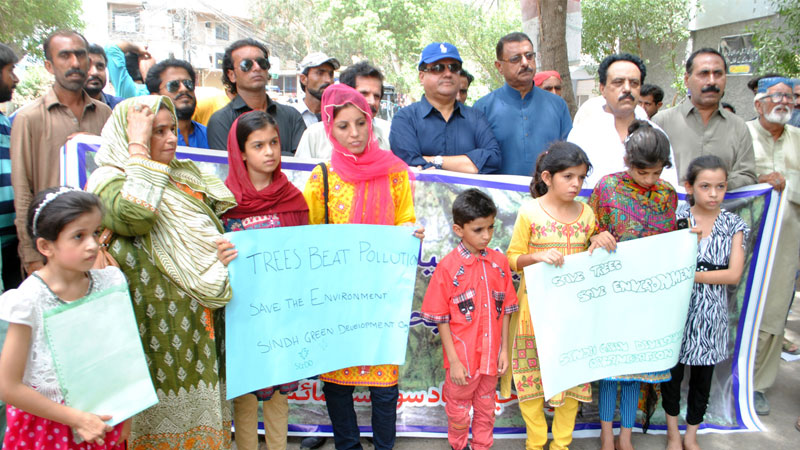 The Sindh-based non-governmental organisations (NGOs) including the Sindh Agriculture and Forestry Workers Coordinating Organisation (SAFWCO) and the Voice of Missing Persons of Sindh (VMP-Sindh) on Monday organised a demonstration in front of the Hyderabad Press Club against ‘devastating’ deforestation and land degradation caused by cultivation by feudal lords (waderas) and landlord-compradors, backed by influential politicians in Sindh.

Reportedly, SAFWCO founder and president Suleman G. Abro, convener of VMP-Sindh Punhal Sario and Prof Mushtaq Mirnai expressed profound concerns over the situation, and said that the land grabbing by feudal lords has caused reduction of the forest land to less than 2.5 percent of the total area, thus causing adverse climate changes, global warming, environment pollution, less rains, and leaving people, the forest communities and their livestock in a ‘helpless’ situation.

They stated that massive losses to the forest economy have turned hundreds of people vulnerable to joblessness and poverty.

Furthermore, they accused the Pakistan Peoples Party’s (PPP) provincial government of giving the forest land on lease to landlords and ‘jagirdars’ for political gains, and informed that instead of tree plantation, they chopped down trees and cultivated the land for agricultural crops.

They appealed to the concerned authorities to take notice of the matter, formulate and implement concrete measures to halt deforestation and carry out comprehensive tree plantation drives in Sindh.