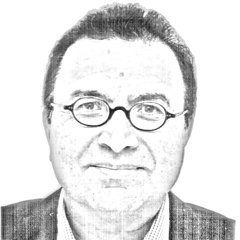 Not many people knew him ten years ago except those in the business community. Despite donning a new attire since joining Pakistan Tehreek-e-Insaf (PTI) in 2012, he still does not look, talk or act like a politician. I was therefore shocked to know from his childhood friend Dr Niaz that Asad Umar always wanted to be a politician.

Asad found himself in Karachi in 1973 after having lived the well-heeled life of an old Pakistani General’s youngest child. While the rest of the country was growing optimistic in Bhutto’s democracy, his family stared into an unknown future. His father was not at fault in the affairs of 1971 but lost his job and suffered house-arrest as a part of collective retribution for those in the military regime. He must have hated to think of his own life stretching ahead of him as it seemed like a long succession of uncertain days and nights.

He spent the next decade adjusting and trying to find purpose in his life. This was hard as due to lack of focus he was neither celebrated at studies nor sports. He had to realise soon that there were only two directions in life; one which is safe but boring, and the other which is fragile but exciting. He took the safer route first which saw him do B.Com and then an MBA. This was followed by employments at HSBC and Exxon; the latter took him to Canada. He found himself on the day when he decided to quit his lucrative job because he only wanted to live and die in Pakistan.

Asad’s life, as CEO of Engro, was cruising along as he was the highest paid head of a private corporation in Pakistan. This was when the nationalist inside him started raising his head. He had always identified himself with Pakistan and felt aggrieved that he could turn himself around but Pakistan’s fortunes had plummeted. While he pondered over the national issues in private and with family and friends, he also shared his notions with national leaders whenever he came across them. He was serving on the boards of several organisations but increasingly felt that this was not enough as public service. Around this time, he met Shehbaz Sharif who stimulated his public service passion and involved him with the British Department for International Development (DIFID).

We first met in London in 2011 as part of Shehbaz Sharif’s delegation to DIFID and other government departments. The day was so packed that both of us opted out of one meeting and talked about the purpose of these meetings and the challenges facing Pakistan. I could sense that he was itching to do more but was not sure how to go about it. The rest is history now because my friend Shehbaz Sharif is a good collector but does not know what to do with the talent at his disposal. This is due to the dynamics in PML-N but also because of his heavy reliance on civil servants. When we met next time on the stage of one of Imran Khan’s Election rallies in 2013, Asad was PTI’s election campaign manager.

Asad has assumed responsibility as the Finance Minister of Pakistan. Unlike his predecessors, he has no skeletons in his cupboard. He has a free hand to run the economy on principles rather than politics

Asad is a simple man and describes his life at an army post in peacetime — when things happen they really happen; otherwise it is rather dull. But simple is not easy because you have to work hard to clear the clutter in your thinking to make things simple. He also believes that his life has a value, and does not want to waste it thinking about the right car, clothes or shoes. His few close friends often forgive him for being boring — no affairs, no merrymakings, no delinquent behaviours. Perhaps they have realised that he goes quiet around them not because they are interesting — he may find them uninformed. To be sane or intelligent can also be boring.

Asad has assumed responsibility as the Finance Minister of Pakistan. Unlike his predecessors, he has no skeletons in his cupboard. He has a free hand to run the economy on principles rather than politics. Further good news is that he does not consider himself an economist and he would rely on economists to reshape our economy. He intends to appoint a reform-oriented chairperson of the Federal Board of Revenue and give complete autonomy to the Pakistan Bureau of Statistics. Approximately 200 public sector enterprises will be placed in a wealth fund led by professionals and he has promised no lay-offs for the workforce in the Steel Mill and PIA.

Asad Umar is doing what he loves and has a family who loves what he is doing. He walks in his own shadow with courage, discipline and integrity. He also has a sharp memory and occasionally a tongue to match. He could keep the latter in check and perhaps learn to be less concrete as a politician. Beyond that, in his inner world where his thoughts and emotions go seeking for the experience of fiscal adventures, there are no policemen, no law, no dread of opinions to keep him within bounds. Only his conscience can lay siege to future enticements.