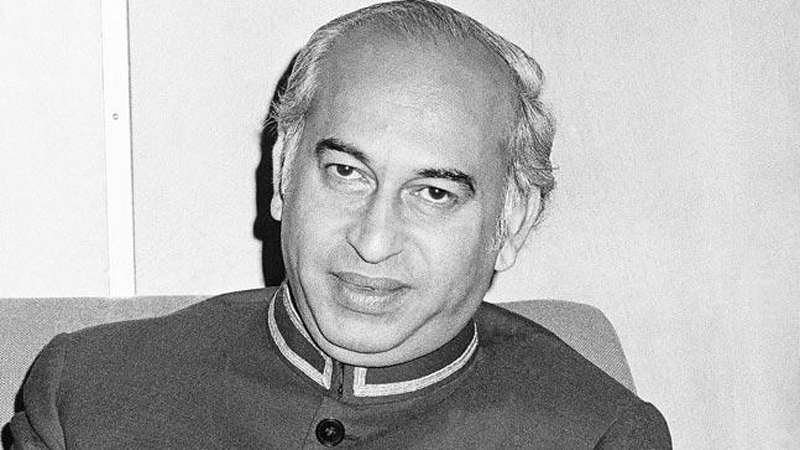 On March 18, 1978 the Chief Justice of Lahore High Court Molvi Mushtaq Hussain gave the Prime Minister of Pakistan Mr. Zulfiqar Ali Bhutto a death sentence in a false murder case. This decision was not surprising as it was according to the wishes of dictator Zia ul Haq who was constantly working towards removing Mr. Bhutto from Pakistan’s political landscape.

In October 1977, some PNA workers in London were already claiming that Mr. Bhutto will be hanged, indicating that the decision to hang Mr. Bhutto was made even before the trial. During that period, Begum Nusrat Bhutto gave an interview to Britain’s well-reputed newspaper The Guardian where she shared her fears that the military has made their final decision regarding getting rid of Mr. Bhutto. She was worried about General Zia’s ignoble intentions for her entire family. Begum Bhutto’s lawyer Mr. Yahya Bakhtiar stated in the Supreme Court of Pakistan his suspicion that the military rulers plan to run a false trial against Mr. Bhutto to deceive the public. He predicted that the trial will be made to reach its conclusion quickly and Mr. Bhutto will be shot dead. It is noteworthy that in October 1977, the trial had not even begun. What the weekly Mashriq had suspected in its editorial, was verified on March 18, 1978 in Molvi Mushtaq Hussain’s decision of death sentence for Mr. Bhutto.

The news of Mr. Bhutto’s death sentence spread like a wildfire. Pakistanis and Kashmiris felt devastated by this latest blow by the military ruler. In a London newspaper, the then British Prime Minister, Mr. Edward Heath commented on Pakistani court’s decision saying that it was a sad decision which would have long lasting and dire consequences for Pakistan. He also praised Mr. Bhutto’s political wisdom. Other British leaders as well as leaders from around the world condemned the decision to hang Mr. Bhutto. The next day, Pakistanis registered a strong protest where the youth and the older generation participated with equal fervour. The streets echoed with slogans of “long live Quaid-e-Awam” and “death to dictatorship”. The Pakistanis demanded immediate release of their beloved leader.

An eminent British lawyer Sir John Matthew visited Pakistan to witness the trial. Upon his return from Pakistan, I happened to meet him in his office and he shared that if such a case was presented in the British courts, the case would have been immediately dismissed. He further observed that the way case proceedings were happening, it does not promise to deliver justice. Moreover, he said that the partial attitude of the Chief Justice gave away the fact that the decision would be given against Mr. Bhutto.

Mir Murtaza Bhutto went from Oxford to London and organized a protest in Birmingham. He himself led the protest which was attended by thousands of protestors. The streets in Birmingham witnessed slogans of “Bhutto is Innocent”, Death to General Zia”, “Restore Democracy”, and “Release Bhutto”. In his address to the people, Mir Murtaza Bhutto said that Mr. Zia is conspiring to murder Mr. Bhutto and only with the help of the Pakistani people we would be able to start a global campaign to save people’s beloved leader. The protest received prominent coverage in the local papers of Birmingham. This protest was the beginning of world-wide protests against Bhutto’s sentence. British Pakistanis and Kashmiri joined hands and protests started in front of Pakistani High Commissions. Hyde Park in London became a symbol for restoration of democracy. After the fateful day in April, the emotions demonstrated in the protests brought tears to the eyes of the local residents.

After Pakistan’s first Prime Minister, Mr. Zulfikar Ali Bhutto was hanged; all the major newspapers of the world commented on the decision and called it a political murder and injustice against Mr. Bhutto. A lot of papers even named the Chief Justice and stated that his partial decision could not stay hidden from the world.

It has been 39 years since Mr. Bhutto left us. Shaheed Muhatarma Benazir Bhutto said in a television interview that she does not believe in the politics of revenge. I have left the matter of justice in the hands of God. Later, the world saw that her faith was vindicated by history. Indeed, you reap what you sow. The ashes of those who devised the plan of Mr. Bhutto’s murder have become lost in the annals of history. On the other hand, Bhutto, whose name was attempted to be erased from history, is alive even today.