The historical significance of Raksha Bandhan 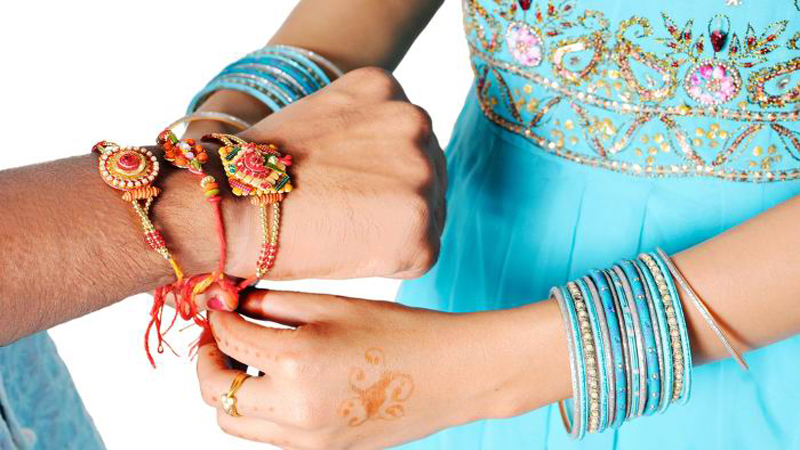 The festival of Raksha Bandhan (Rakhi) is celebrated in July/August account every year by the Hindus. This festival celebrates the strong relation of brother and sister. A sister ties a thread on the wrist of brother she also prays for her brother and performs ‘arti’ for his brother’s blessings. A brother gives some gift or cash money to his sister as token of love and makes a promise with sister to protect her at every cost.

Pakistani Hindus also celebrate this festival with great zest and zeal. However, the Hindus living in Cholistan and Thar areas have little knowledge about the religious festivals of Hinduism. There are several tales associated with the question as to how this ritual first started and what its idea is.

According to ancient history of Hinduism, the ritual of Raksha Bandhan was associated with the high caste Brahmans who change their sacred thread in the beginning of rainy season. This ritual presents the philosophy of protection. At this festival the Brahman Hindus change their old thread with new ones.

According to a tradition the wife of Indra deity tied a thread on the wrist of Bali (Evil) and created a brotherly relation with him so that she could protect her husband from him. Usually sisters tie the same thread on the wrist of brothers who are supposed to be their protectors. Brothers are expected to give some gifts on this event to their sisters.

According to another story, Raksha Bandhan is associated with Maharani Karnavati and king Humayon, from the time when the Rajputs were fighting the army of Humayon. When the queen of Chitor, Maharani Karnavati, came to know that her army is about to lose, she sent a Rakhi to Shah Humayon. Then shah Humayon ordered to stop the fight and call back his army, in the name of the Rakhi presented to him. Thereafter, she accepted Rana Karnavati as his sister and spared her and her kingdom.

Many of Hindus believe that the Raksha Bandhan is associated with the king Porus of Hindustan and Alexander the great of Macedonia. This is believed that in 300.BC when Alexander came to invade India then the King Porus gave him a tough time to occupy his motherland due to his braveness and smartness. Even Alexander he himself acknowledged his bravery and smartness in battle field. King porus defeated Alexander the great in initial battle fields which made Alexander annoyed and worried first time. It is believed that when the wife of Alexander saw him worried, she used the same trick and changed the game by approaching King Porus and tied a thread on his wrist and created a brotherly relation with her and during the war when Porus was dominating on Alexander and got an opportunity to kill Alexander then his wife appeared and showed his thread and made him remember his promise.

According to Hindu’s scripture Rakhsa Bandhan is associated with Lord Krishna and Dropti. When Lord Krishna was fighting with an evil he got injured then Dropti tore a piece of his scarf and tied on Lord Krishan’s hand to stop the blood. Lord Krishna made a brotherly promise with her for her protection. After many years of this incident when Pandus lost Dropti in front of Kairos, they attempt to undress Dropti. Krishna saved her by prolonging her sarhi. Kairos got tired by uncovering the sarhi but they could not do this by the miracle of lord Krishna. The miracle of lord Krishna protected Dropti’s ‘honour’.

As the Rakhi festival comes, many colorful and beautiful rakhis arrives in the market. Normally the rakhis are just like an ordinary bracelet but in Hindu society, Rakhi has a great deal of religious significance. It is considered the symbol of commitment and promise.

Usually all the Hindu celebrate the Rakhi festivals at their homes, but in some villages of interior Cholistan they celebrate the festival collectively. They choose a place and gather there, with a religious leader (Pandit or Guru) leading the rituals. When the ritual starts, a sister step forwards and apply tilak on forehead of brother then performs arti and finally ties a thread on his wrist. Following this, the brother gives some gift or money to please his sister. If a brother has more than one sister then all sister tie a thread on his wrist. At this event a brother makes a promise to protect her sister in all ways.

There is no trend of family marriage in Hinduism that’s why if any girl has no brother then she ties a thread on the wrist of her cousin’s wrist. The beauty of this festival is that it gathers all the brothers and sisters and connects them.

The writer is Ph-D Scholar at Department of History of Islamia University of Bahawalpur Kashifjamil397@gmail.com